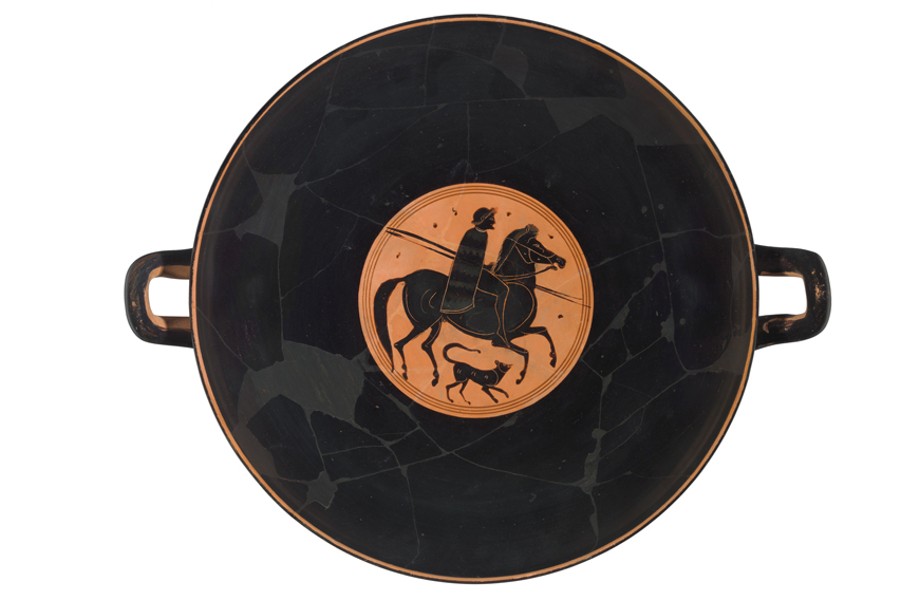 Virginia Museum of Fine Arts The terracotta Black-Figure Cup (with Hunter and Dog) in the VFMA collection dates to circa 510 B.C.

An engaging and meticulously rendered image of a man attired in jaunty riding apparel and sitting atop a horse is on display at the Virginia Museum of Fine Arts. The handsome steed is depicted in full gallop.

You might assume the work is one of the dozens of elegant equestrian paintings or drawings in the museum's acclaimed Mellon collection of British sporting art. But you'd be mistaken.

And no, it's not "Napoleon Crossing the Saint Bernard," artist Jacques-Louis David's famous 1800 depiction of the French emperor, astride a white stallion crossing the Italian Alps. (For more on a dazzling new Napoleon exhibition, see page 24.)

You will find this engaging silhouette of a man, horse, and faithful dog, no less, in a less expected place — applied to an ancient Greek black-figure cup circa 510 B.C., which to contemporary eyes reads more familiarly as a low, shallow bowl.

The terra cotta container is one of 78 intriguing objects — vases, sculptures and coins crafted from the eighth through the fourth centuries B.C. — that comprise "The Horse in Ancient Greek Art." It's the first major exhibition to focus on antiquities from Greece that the museum has offered in a generation. And it's a must-see.

Why so powerful and engaging an exhibition? The answer rests in how we filter art through our life experiences. And this crisp and airily arranged exhibition presents objects — from fingernail-sized coins to oversized clay jugs — that exude a sense of freshness, modernity even, that remind us why the Greeks are credited with firing the starting gun of Western aesthetics.

In addition to the equine theme, this exhibition provides exquisite examples of how the Greeks depicted human figures free-standing in nature, drawn with a hyper-fine linear quality that, while meticulous and spare, also suggests vitality.

And if the human figures tend to be classically ideal, the mostly unknown artists of these works are nothing if not unsparing in their depictions of human foibles. From object to object, mere mortals clash in armed conflict, subject themselves to political or military rulers, or are seduced by various gods and goddesses.

Those clashes often are in conjunction with a horse nearby or a part of the action. Today, just like with the ancients, horses are seen as animals to respect and to celebrate, like Justify and Secretariat.

The intelligent sequence of this exhibit begins with information panels that explain Greek pottery types and how they were made. Next are objects possessing beautiful images of early horse imagery from the geometric period, circa 900-700 B.C., named for its geometric, repetitive and intricate patterns.

Following these are objects depicting myths and legends where such horse hybrids as the winged horse, Pegasus, and frisky centaurs meld human and equine characteristics. The horse in war is depicted. Finally, there's the equine place in hunting and chariot racing.

"The horse in ancient Greek art has rarely been addressed in museum exhibitions," says Peter J. Schertz, the museum's curator of ancient art, who served as co-curator of the exhibition with Nicole Stribling, curator of permanent collections at the National Sporting Library & Museum in Middleburg — the co-organizer of the exhibition and where it opened in the fall.

Despite the awe with which most visitors approach works of sublime beauty and antiquity, this exhibition is refreshingly accessible, even with opportunities for hands-on activities such as sketching. It also includes delightful and colorful animations of Greek equine activity created by an undergraduate class at Virginia Commonwealth University. The Greek love of poetry and music is acknowledged by the inclusion of a reflective space, defined by three chaises, to suggest the setting of a Greek symposium. Here, visitors can read poems by Ron Smith, a former Virginia poet laureate, or perhaps write their own verses.
"The Horse in Ancient Greek Art" pu
lls together objects from the VMFA's fine collection of Greek vases as well as Fordham University and Metropolitan Museum of Art, both in New York, the Tampa Museum of Art and a private collection. A fully illustrated exhibition catalog, with essays by leading scholars of ancient Greek art and archaeology, is available. It was published by the two sponsoring organizations and is distributed by Yale University Press.

And here's a suggestion to those headed for the Napoleon exhibition: Consider beginning your visit by visiting the Greek horses. It's a pleasing coincidence that these two exhibits are under the same roof for a few weeks, one spotlighting accessible objects from Greek antiquity, the other featuring eye-popping works signaling the full-blown Greek and classical revival styles in Europe. S