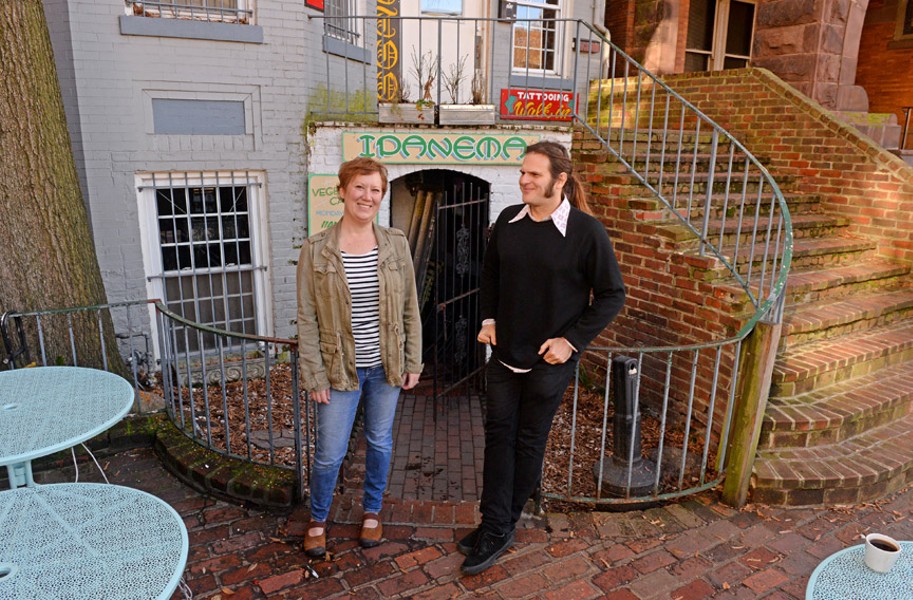 Twenty years ago, I've been told, it was not easy being a vegetarian in Richmond.

The late '90s weren't the most intuitive years to open a vegetarian restaurant. The city's original vegetarian spot, Grace Place, had recently closed and meat-heavy fad diets were all the rage. A lot of people still perceived vegetarian food as bland and earthy, even if it was good for you. The old "rabbit food" mentality had not been fully debunked.

And yet Kendra Feather opened Ipanema at 917 W. Grace St. and our palate evolved to appreciate how flavorful vegetarian cooking can be. Deborah Madison's 1997 book "New Vegetarian Cooking for Everyone" was an early muse for the menu. A mix of musicians and artists staffed the house, including future filmmaker Rick Alverson.

And Feather — who knows the art of good service but readily admits she's not a chef — started the early makings of her restaurant empire in the cellar.

"I was stupid, young, and had no money," she says. "And super-nice people took a chance. No one complained about how budget it was."

The first bar was made of plywood. An early, bad paint job caused drinks to stick to the bar. But long-term staff such as Greg Darden, the manager for about 17 years, helped build consistency for this time-honored standby on a block now consumed by his alma mater, which he jokingly calls the Virginia College of the Unwanted.

Necessity being the mother of invention, Feather repurposed Mason jars and brought in dishware from thrift stores before it was trendy. Her aim was for the place to feel like your favorite bar in a brownstone. Today Ipanema still feels apart from the busy world around it: Step downstairs off the street and you're in a dark cellar that feels like an old friend's place. It has always welcomed everyone: Professors and students, hipsters, yuppies or whomever. Vegetarianism, as Feather says, can strike anyone, anywhere.

As many more people have adopted plant-based diets, either by choice or out of necessity, locals have counted on Ipanema to continue providing a delicious alternative to meat sweats and cardiac threats. For Feather and Darden, the highest compliment they hear is when diners say they'd become vegetarians if they could eat at Ipanema every day.

The charm of the place involves more than its booths and basement. Two decades after opening, the cavernous restaurant offers a slice of early restaurant scene on a block of Grace Street that once was the epicenter of Richmond's counterculture. Ipanema has endured the migration of chain restaurants and towering new Virginia Commonwealth University dorms that make the block disorienting to those who knew it before. Over the years, Feather's team has imbued its chalkboard offerings with the creative flavor of the many artists who passed through the cellar door.

The popular jackfruit barbecue sandwich was shaped by a random conversation Feather had with a fellow shopper at an Asian food market. Her restaurant was in the initial stages of experimenting with jackfruit as a new ingredient when this chat helped shape the creation of a sandwich that looks and tastes exactly like a savory, pulled-pork sandwich.

If you're looking for unvarnished criticism, you won't find it here. This is a love letter to a place de cuisine that captured my heart after I moved to the River City nearly a decade ago. A friend from college introduced me to Ipanema shortly after I moved here, and it's been consistently one of my favorite spaces — where I celebrated birthdays, special occasions or took friends from out of town. My husband and I still make our way there for date night.

The crowds have changed over the years. A favorite haunt of VCU faculty, the restaurant is equally likely to attract a more diverse and younger crowd depending on the hour. That can be a rarity across the Richmond restaurant scene. Touring artists usually get pointed there when diets demand it. Weird Al Yankovic has eaten there, Style's editor fed documentarian Ross McElwee there and My Bloody Valentine ordered takeout.

If Feather and Darden could say anything to Richmond, their message is simple: Thank you for the wonderful memories of growing up on legendary city block with friends and fellow creatives. And of creating a sense of community for those who seek it.

Even as Feather steadily expanded her footprint to Garnett's, the Roosevelt and Laura Lee's, Ipanema has remained a bright spot of authenticity. The restaurant has only once briefly faced the specter of its own mortality. Last summer, the 1939 brownstone it calls home was sold to new owners. Rumors of Ipanema's imminent demise began circulating on Reddit, but the building's new owner wanted to keep the tenants as they were.

And so, happily for now, there are no plans to go anywhere, even as Richmond's vegetarian and vegan scenes have grown exponentially since Ipanema opened its doors.

"It's almost as if Richmond doesn't need us anymore," says Feather in an earnest and positive way.