Cool and reserved, why does Mayor Dwight Jones rarely use the oratory skills he’s honed as a Baptist minister? 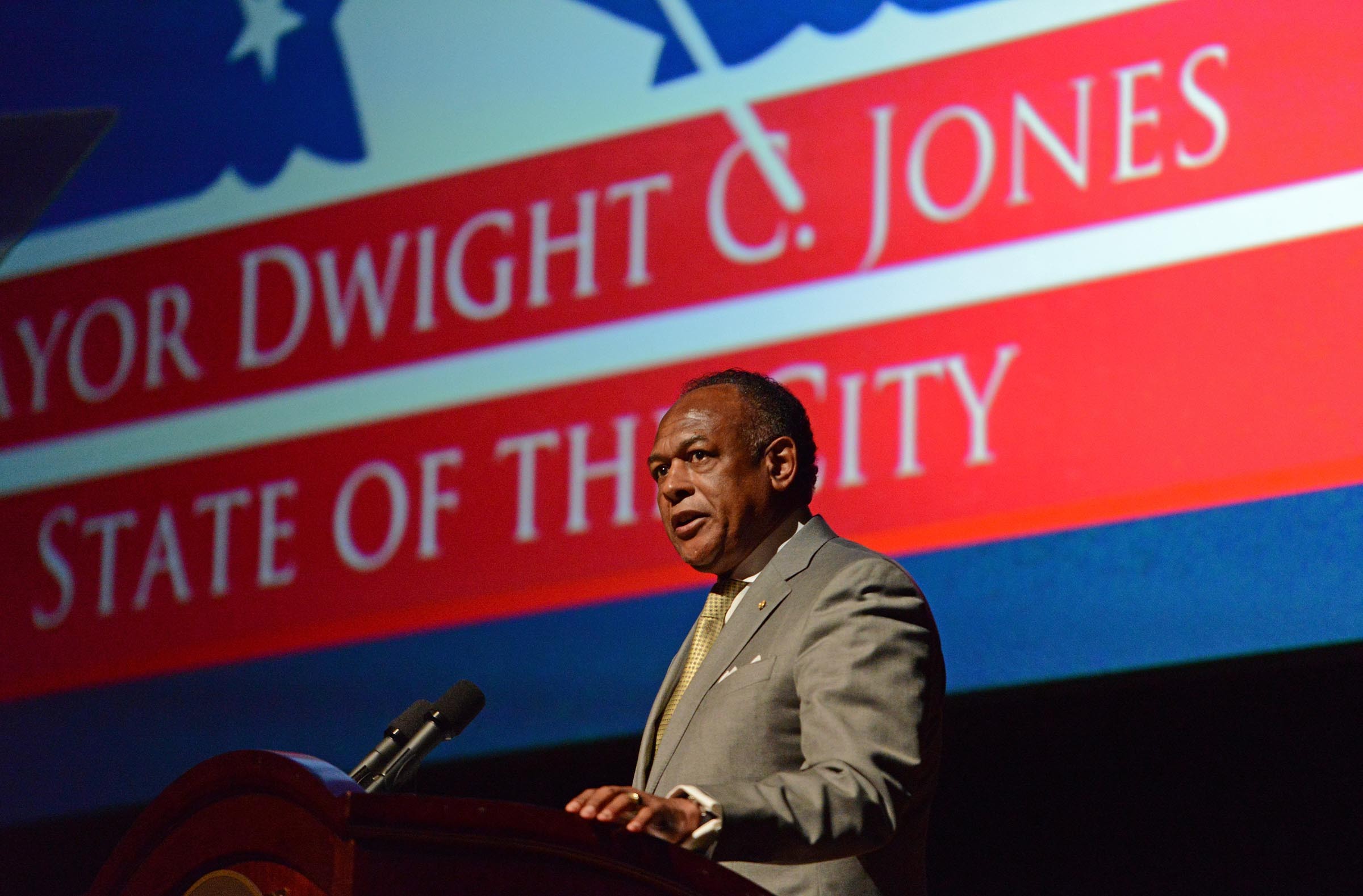 You won't find Floyd Mayweather Jr. in Mayor Dwight Jones' prepared remarks. The most inspirational line in his State of the City address Jan. 29 is nowhere to be found in the official speech, posted on the city's website a day later.

After a recent fight, Mayweather, the world champion boxer, was responding to sportscaster Larry Merchant's question regarding his remarkable stamina. "Floyd Mayweather said to him: 'You see, you are right. And what you saw was the truth,'" Jones tells a crowd of several hundred people at the Carpenter Theatre last week. "'The longer I fight, the stronger I get.'"

It's the kind of setup that's taught in Homiletics 101 in theology school, which teaches pastors-to-be the rhythm and cadence of sermons — metaphor and repetition, the call and response. Jones, a longtime Baptist minister entering his second term as mayor, was limbering his audience up for the big punch.

Then Jones abruptly ends the speech. After 40 minutes of robotically recounting his accomplishments and plans for the future, he revs the engine but refuses to pop the clutch. He takes his congregants to the edge — but simply won't push them over.

Jones' refusal to tap into his considerable oratory skills as mayor has perplexed observers for years. He's been senior pastor of First Baptist Church of South Richmond for more than three decades, but rarely does the passionate, fire-and-brimstone minister show up at City Hall.

This, say some, is by design.

"Whenever you show emotion and passion, some folks get intimidated by that," says Terone Green, chairman of the Richmond Ambulance Authority and former president of the Richmond Crusade for Voters. Green is referring to the tendency of Southern black men to speak at a high volume, with passion, something personified in the black Baptist preacher. "It's easy to try and label us as angry all the time. … Black men cannot show compassion or emotion because it is often perceived as negative."

But why? On the rare occasion that Jones has let his passion creep into politics, he's proven adept and effective. You can convincingly argue that the mayor's fiery State of the City address a year ago at Thomas Jefferson High School — he called on the city to stop "celebrating mediocrity" in a passionate plea to fix public schools — was the catalyst that led to a shake-up of the School Board in November, and the mayor's convincing re-election.

Finding that balance is something many black ministers struggle with upon entering politics. The Rev. Tyrone Nelson, a black pastor elected to the Henrico County Board of Supervisors in 2011, says he frequently finds himself attempting to keep his passion in check, sometimes unsuccessfully.

"In some environments my passion and my tone may be misunderstood as something that it is not," Nelson says. "It's kind of hard. I don't want the tenor of my conversation to get in the way of what I'm presenting."

Jones, a former state legislator and Richmond School Board member, has some experience with this. He's long been a purveyor of cool in the political arena, former city councilman Sa'ad El-Amin says.

"I think that in many ways Dwight has a desire to come off as a deliberate, serious person who is not emotional and therefore is trustworthy," El-Amin says. "When you say something, when you say it rarely, it has more impact than if you are running your mouth. His formula is less is more."

But is Jones's less not enough? In his first term, he was fond of saying that his primary objective was to get the city's "house in order" following the tumultuous reign of his predecessor, L. Douglas Wilder. When Richmond switched to a mayor-at-large form of government in 2004 — the mayor used to be appointed from within the ranks of City Council — civic and business leaders envisioned a popularly elected mayor capable of establishing a true agenda for the city and region. With Wilder, no such vision ever came into focus.

Two years into his first term, Jones told Style Weekly that the grand vision would have to wait. "I understand that you want a champion, you want a president for the region," he said in February 2011. "You don't have that."

Jones spent more than half of his 45-minute speech last week addressing the city's crippling poverty and the recommendations of his anti-poverty commission. "For my second term, we are setting our sights a little bit higher," he says, telling the audience members that he may call on them to "step out of your comfort zone and to take risks with me" to advance a more aggressive agenda.

The better question, perhaps, is whether the mayor is willing to step out of his own comfort zone. In order to push his more aggressive agenda, is he willing to move Richmond the way he moves his flock at First Baptist?