The battle for City Council president just might set Richmond's political course through 2016. 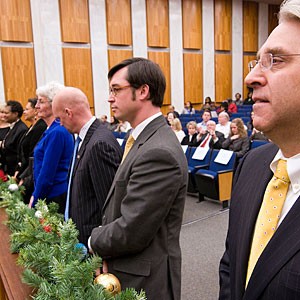 For politicking, it's the dead of winter. But make no mistake: The behind-the-scenes battle over who will lead City Council is about to set the political tone in Richmond for the next six years.

But the quiet standoff has broader implications: Whoever takes the gavel — the president and vice president serve for two years — will set the table for the 2012 elections, when all nine council members and the mayor are up for re-election.

A vote for Graziano is a vote for keeping the peace, maintaining the cooperative tone that's been the modus operandi at City Hall since Mayor Dwight Jones took office in 2009. A vote for Tyler would shake up the status quo and begin some measure of push back while frustration grows about Jones' slow-mo governance.

As the third year of Jones' four-year term begins, relations between his office and Graziano's council have been harmonious. But the cordial atmosphere masks an increasing frustration among some on City Council with Jones' leadership. Tyler, who many people expect to run for mayor in 2012, often has embodied that dissent, challenging the mayor's budget, for instance, and publicly suggesting the mayor's agenda needed to be “slapped” earlier this year.

Support for Tyler, however, has been lukewarm. Sources at City Hall say that at one point Tyler had managed to secure three votes — council members Marty Jewell, Doug Conner and Reva Trammell — but the alliance has been shaky. Trammell told Style Weekly this summer that she supported Graziano.

Most members contacted declined to comment, including Connor and Jewell. The council staffer for Graziano said she had no comment on the upcoming vote.

Some observers say Tyler simply positioned himself too aggressively against the mayor. And there is wariness of returning to Wilder-era political battles and infighting.

But does too much cooperation create a leadership void? Since taking office, Jones has rarely used the bully pulpit, remaining quiet on any number of political issues, including the recent noise and dance-hall ordinances, and has yet to bring the stability to City Hall that many expected. Several key positions remain vacant — the city has failed to hire an economic development director, for example, and the finance director, Marcus Jones, recently left to become Norfolk's city manager.

Councilman Chris Hilbert says the cordiality is a sign of progress. “I think sometimes that when we don't have these open conflicts as we did in the previous administration, people mistake us working respectfully with one another as consent,” Hilbert says. There is push back, he says, it's just not as public.

Hilbert, who supports Graziano, says he wasn't courted by Tyler but acknowledges there are some who think it's time for a change. Those who informally backed Tyler in recent months (including Jewell and Conner) “were obviously dissatisfied with the status quo,” Hilbert says.

For example, the mayor has been slow to move on plans for developing Shockoe Bottom, a new ballpark on the Boulevard and discussions about the future of the Richmond Coliseum. The mayor also has been criticized for his inability to articulate a strategy to address the city's poverty rate, which is the highest in the state.

Despite some critiques to the contrary, Hilbert says the city is making progress on important issues. He refers to recent groundbreaking on two new schools as evidence.

But new school construction is a holdover from former Mayor Douglas Wilder's City of the Future plan, which promised $300 million in new schools and public infrastructure, but got mired in political conflict with the School Board.

Still, how the council-president tally plays out raises another, perhaps more important question: Six years after Richmond shifted from a council-appointed mayor to one elected by the general populace, is the new government delivering on its promise of dynamic leadership at City Hall?

“When you go back prior to the charter change, there was a growing consensus that the mayor of Richmond needed to have a citywide constituency,” says John Moeser, a senior fellow at the Center for Civic Engagement at the University of Richmond and one of the chief architects of the city charter. “The business community felt that there needed to be a mayor with more authority, not necessarily in terms of statutory perspective, but authority to speak on behalf of the people.”

Wilder had the authority, but little was accomplished during his term, outside of political infighting and public battles with the business community, City Council and the School Board.

As for Jones, it's too early to tell, Moeser says. He has two years left.