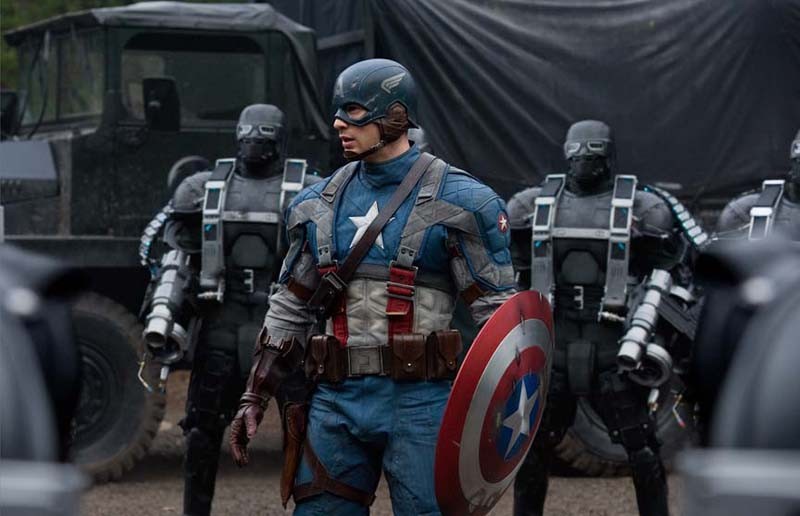 How do we explain the praise heaped on “Captain America: The First Avenger”? It must be good old-fashioned patriotism. This is a terrible movie, expensive perhaps, and high-flying, but totally silly. Yes it has a quaint period setting and one of the original comic-book heroes. And yes, he’s been treated better than he was in a 1990s version that is best forgotten. But treated better in CGI and star power only. Completely lacking in genuine emotional engagement, “Captain America” is most surprising for its vast, stultifying middle section of really cheap-looking action scenes. How much you enjoy it will depend on how far you are emotionally from making your own sound effects for gunfire and explosions.

Those not bothered by any of the above won’t be bothered by it, as long as they get to see the familiar red, white and blue guy bounding across the screen. That we do, but first there’s 90-pound weakling Steve Rogers, a computer-generated amalgamation of the head of actor Chris Evans (“Fantastic Four”’s Human Torch) and a really short, skinny body. It’s creepy. Rogers, army reject and bully victim, soon will be transformed into the heroic Captain America through an ultra-secret Super Soldier program. Along the way we meet the scientist responsible (Stanley Tucci doing Einstein), Cap’s best buddy, Bucky (Sebastian Stan), a love interest (Hayley Atwell), and a crotchety superior, Colonel Phillips (Tommy Lee Jones), who has almost no purpose in the picture other than to be a tired cliché.

The Evans-as-skinny-guy scenes are dutiful to the comic book in history and spirit but also are a bit slavish to the technology used to create them. I thought of the 1978 “Superman,” and the patient, moving chapter about his youth, the frustration of having to pretend to be weak and awkward. You rooted for Superman. No computer imagery needed. Because the newer movie is so overstuffed, all we get are obligatory routines: a brief bullying scene, 30 seconds of patter between the romantic interests, less of friendship between Cap and Bucky. It’s not a movie but an advanced PowerPoint presentation.

With the supporting characters little more than cardboard cutouts, the decision to select Evans, who aspires to be as good as cardboard, perhaps makes sense. He’s a lug, a human action figure, just like in the “Fantastic Four” movies. But doesn’t that double duty disrupt the Marvel universe? Maybe not. Those magazines I devoured as a child were even nuttier: It wouldn’t be surprising if Evans met Evans some day, bod to bod, in a future film. The only question would be who would bore whom to death first.

The most common praise of “Captain America” has been for its World War II setting and insistence on having the hero gradually develop his costume, persona and so on. But what these attributes accomplish most is masking the shoddiness of everything else -- that this movie is on par in every other way with Evans’ “Fantastic Four” movies. One of the biggest mysteries of the summer is why people aren’t laughing hysterically during the long stretch of “Captain America” featuring Cap taking on his nemesis, a former Hitler henchman gone rogue called Red Skull (Hugo Weaving), and his faceless minions. These are some really poorly done, cartoonish action sequences, all in lazy, extended montage. Cap storms a fort by jumping his motorcycle into it. He swings in slow motion from a factory ceiling while shooting a machine gun. He rappels onto a moving train because, you know, it looks cool. Because it would be pointless to devise a plan for a train not speeding through snowy mountains.

Here’s another question: Because the Red Skull already looks like a Nazi guy with, well, a red skull, did they really need to make his theme the “Götterdämmerung”? It’s so graceless, like a musical malapropism. And yet it’s so typical. When it comes to comic book movies, dialing it down -- like “Batman Begins” -- is a better recommendation.

Eventually it’s back to origin time, or re-origin in this case, allowing the next chapter of another origin story. Very clever. The point of the movie is that there is no point, other than raking in a few hundred million dollars on the way to another product. This is our great summer movie? More than a thousand Red Skulls, what I fear is August. (PG-13) 124 min.