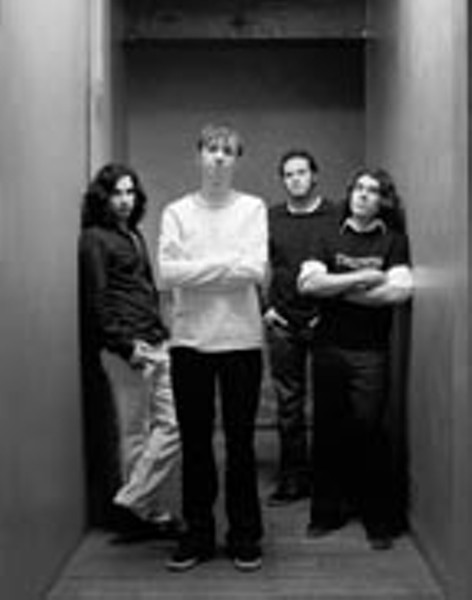 "Jim was reading the Michael Moore book 'Dude, Where's My Country?' and he wanted to make a difference in some small way," says guitarist Paul Hinojos. "We really wanted to get Bush out of office. El Paso has a lot of young people who don't vote, so we thought we'd play a show, and if you show proof you voted, we'd give away free stuff at an after-party."

El Paso looms large in the Sparta story, for reasons that go beyond the current tour. Though three members are now based in Los Angeles, the band's roots are in the dusty Texas border town, where teenage friends Ward, Hinojos, and Tony Hajjar met Cedric Zavala and Omar Rodriguez in 1994 and started playing high-energy punk rock as At the Drive In. They were on the verge of a mainstream breakthrough after signing with the Beastie Boys' Grand Royal label in 2000, but it wasn't to be. Band conflicts and the pressures of success mounted, and At the Drive In went on an indefinite hiatus the next year. Zavala and Rodriguez formed prog-metal outfit the Mars Volta and the remaining members recruited local pal Matt Miller and christened themselves Sparta.

The band's 2002 album "Wiretap Scars" picked up where At the Drive In left off, but "Porcelain" ups the ante with a bigger, more layered sound and more experimentation. Hinojos' ringing guitar leads sometimes bring to mind late '80s U2, which may owe something to where the album was conceived. When it came time to write a new record, a number of uninspiring jam sessions in their Los Angeles practice space led Sparta to try something different.

"We were talking with Josh Homme from Queens of the Stone Age," says Hinojos, "and he offered to let us use his studio, Rancho de la Luna. It's in Joshua Tree, California, out in the middle of nowhere." The vibe of the area where U2 produced the multiplatinum album "The Joshua Tree" proved to be just right.

Hinojos says, "We set up our gear in the living room, and we could play any time day or night. We would do silly things and act like kids. We'd shoot fireworks and do these things that just reminded us that we're still friends, too."

With the album complete, it was back to the road, a place Sparta feels comfortable, having logged roughly 250 shows last year. Though Hinojos can't recall swinging through Richmond during his endless travels, Sparta has a local connection, having played dates earlier this year with local band Engine Down. "Yeah, we love Engine Down," says Hinojos, "they're supercool guys. We like to make new friends on tour." The election didn't go the way Sparta wanted, but their drive for meaningful personal connections remains. S