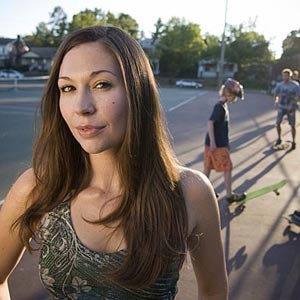 Emily Ferlis has taught in Japan, Bulgaria and New York City, spoken at education conferences in Serbia and Estonia, backpacked in Vietnam, China and Bali and once opened locks on the Panama Canal.

But Ferlis considers Richmond home. After years of teaching in far-flung locales, it's where she's embarked on a doctoral program in education at Virginia Commonwealth University. She works full time as a program development specialist for the university's Literacy Institute.
Ferlis is passionate about English education for all ages. She's coached teachers and families of low-income, at-risk pupils at five preschools in South Side Richmond, led literacy workshops in local libraries and supports state policy initiatives that focus on adult English as a second language, preparation for general equivalency tests and work-force development.

“Emily doesn't ever clock out of a job,” says Helen O'Beirne, a lobbyist and past Top 40 recipient.

A native of Northern Virginia, Ferlis first moved to Richmond to attend VCU. Despite a transfer to the University of Virginia and her subsequent travels, Ferlis says the friendships she made here “always brought me back.”

After teaching English in a high school near Nagoya, Japan, and Dominican high school students in New York, where she earned her master's degree in English as a second language, Ferlis taught at a Bulgarian university through a State Department program.

Back in Richmond, when she's not researching for her thesis — which focuses on young people with learning disabilities trying to learn English — Ferlis is a co-founder of the Southside Skateboarding Project, a new initiative that advocates for applying kids' love of the sport to learning.

Skateboarding can be connected to math games, art and creative writing, Ferlis says enthusiastically while surrounded by skateboard-inspired art recently on display at Bellytimber Tavern: “All of those benefits from … something that they already love.”