Embedded in "The Nutcracker"

A dance critic prepares to make her debut in the most-loved ballet. 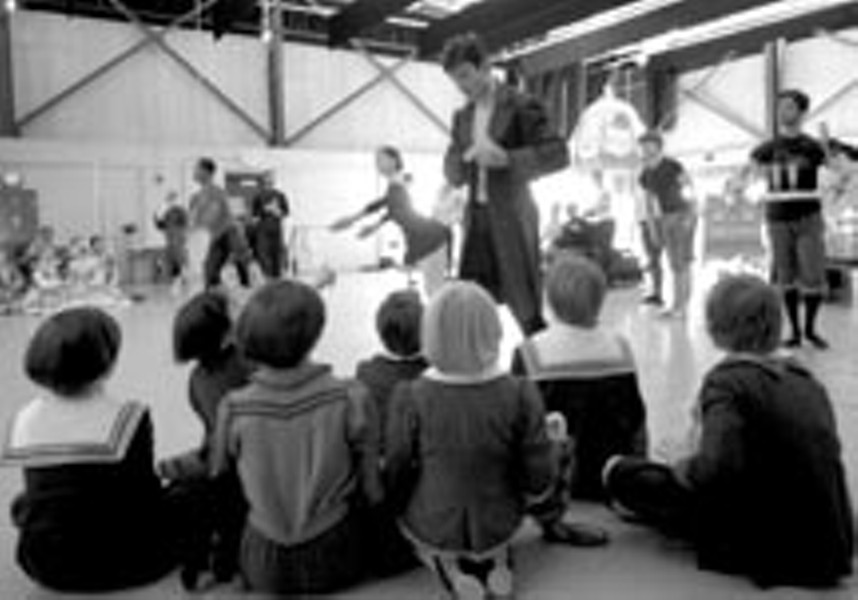 This evening, company member Jesse Bechard is my sweetheart (alternately played by the charming apprentice, Michael Forrest-Johnson), who guides me graciously across the stage marked out in the large studio, pausing briefly to pantomime whispering a sweet nothing in my ear. I am, of course, shocked, and long for a fan with which to rap his knuckles, but the heavy skirts, along with the strange, camelesque feeling of the bustle flouncing behind, are enough for me to deal with. Thank goodness my too-tall frame means I can stay in slippers (no heels) and lessen my chances of a spectacular tumble into the orchestra pit.

For Jesse and most other company members, though not for this 33-year-old debutante, the ballet is to some extent old hat. Most of the dancers have been performing different roles in various "Nutcracker"s since they were children, and because "The Nutcracker" appears to be permanently blessed as both an audience favorite and a moneymaker, it commands an inevitable (some might say inescapable) presence in a ballet dancer's life. With such familiarity, however, can come unexpected benefits.

Performing the same parts year after year allows dancers the chance to dig in — to push the boundaries of their interpretations of a role. Katherine Lynch's mechanical doll, with a fixed, slightly demented expression and comical jerks of the head, has become "wonky and wobbly, with a few screws loose," she says. Valerie Tellmann, now in her fifth year as Snow Queen, partnered by Phillip Skaggs, describes how she and Skaggs can take risks, can "spice up" the now-familiar steps by adding an extra turn or finding a new accent on the music.

"As dancers we grow every year," says Lauren Fagone, who will perform the Snake — a role she always wanted — for the second year and the Butterfly for the first, although she learned it last year, flying harness, wings and all. Longtime Richmond Ballet teacher Susan Israel Massey, who plays Grandmother to Bob Murdaugh's Grandfather, jokes that she needs less makeup as the years go by.

Learning new roles presents another set of challenges that dancers find equally appealing. Having three different casts this year, Anne Sidney Davenport says, allows everyone to try different parts with different partners, bringing new dynamics into play. Jenna McClintock has danced parts ranging from a gingersnap as a child to the Sugarplum Fairy as an adult. This year, her roles include the mechanical doll, Snow Queen and, for the first time, a Chinese dancer — a part she finds particularly challenging because, she says, "I'm not a jumper." Tyler Starr, playing Clara for the first time this year, says that her role is "challenging but really fun," and her Prince, played for the fifth year by company trainee Paul Dandridge, feels both protective and proud of her.

What really seems to bring "The Nutcracker" to life for these dancers again and again are the children. Davenport says she likes it when the children join rehearsals because many of them have never performed the ballet before, and their excitement reminds her that the audience feels the same way. Pedro Szalay loves to watch the children's faces, seemingly mesmerized by Drosselmeyer's amazing nutcracker doll, and Fagone enjoys watching the little girls grow from year to year, sometimes playing girls and sometimes playing boys (since there are never enough boys to go around). The presence of children in the rehearsal keeps the ballet honest, real and new for all involved.

On this rainy night, company members giggle as the little girls rehearse their parts as mice who creep out to terrorize Clara after the adults have gone to bed. With legs like water bugs, the girls in their blue leotards skitter across the stage, wiggling their fingers before their faces like mouse whiskers. Following carefully practiced patterns, the girls try, at Artistic Director Stoner Winslett's behest, to project as much menace as possible from their small frames.

Artistic Associate Judy Jacob says that since Oct. 1, 138 children (divided into two casts) have been working with her and other teachers every Saturday and Sunday for up to two hours a day to prepare for their "Nutcracker" performance. In the studio they are disciplined and quiet. While rehearsing the party scene, the children often know better than the company where to go and when. Those not rehearsing sit on the floor and watch the action, providing welcome applause at dramatic moments. In the hallway, they dissolve into chattering excitement, practicing steps, jumping up and down, and imitating the snowflakes or the toy soldier.

During these rehearsals, the lines between the "Nutcracker" world and the real world are blurred. Dancers try on rat heads and tails in one corner; party children are introduced to their parents; little girls relish their ruffled dresses; the dolls practice getting in and out of the cramped boxes from which they make their appearance. The intense working environment with its often frustrating stops, starts and repetition of steps, sequences, or entire scenes is enlivened, enriched every time a performer — veteran or debut — moves deeper into a role, finding a new expression or connection with another performer.

Company apprentice Angela Hutto, who has danced both snowflake and flower roles for the last several years, gets to be a party mom, too, this year. She loves the "Nutcracker" and the music. For her, the ballet forms an integral part of the holiday season. "I don't know what I would do," she says, "if I wasn't in 'Nutcracker.'"

Stay tuned: In the Dec. 21st issue I will have a full report on my Nutcracker debut. With the scoop on life backstage, plus what it's like to go from a kid who was too shy for dance class and too tall for ballet to dancing with the Richmond Ballet in a beloved classic. S