A diverse series of local exhibits explores the issue of race — past, present and future.

An untitled work from 1956 by celebrated photographer Gordon Parks is on display at the VMFA as part of a multi-venue exhibit over several months titled "Race, Place and Identity."

It might be surveillance footage of busing protests that speaks to you. Or the elaborately braided hairstyles that resonate with a different notion of art. Almost everyone, regardless of age, will be struck by just how undeniably young the country's best-known activists were in the '60s. There are so many ways for the viewer to be hooked in the first must-see exhibition of the year, "Race, Place and Identity."

Blossoming from the seeds of 2013's sesquicentennial of the Emancipation Proclamation, eight Richmond-based arts and cultural organizations have shows that address issues as basic as race, place and identity and as complex as the ongoing class, economic and racial struggles that continue to define Richmond and the country.

The wide-ranging event first saw daylight in April when three curators — Ashley Kistler, director of Virginia Commonwealth University's Anderson Gallery, Sarah Eckhardt, the Virginia Museum of Fine Arts' assistant curator of modern and contemporary art, and Gordon Stettinius, director of Candela Books and Gallery — realized they each were working on shows tied to civil rights and social justice. As discussion progressed during the next seven months, the core group grew with the addition of Black Iris, 1708 Gallery, Elegba Folklore Society, Reynolds Gallery and the Valentine Richmond History Center, and the theme widened to civil rights and social justice past, present and future.

"It began very much focused on civil rights," Kistler says. "But it grew to where now it's about how those themes are reflected in current day situations, too."

With eight different exhibits to consider, there's plenty to interest everyone: baby boomers to millennials, history buffs, conspiracy theorists, photography fans and cultural observers. Like the Richmond Folk Festival, it's best to make a plan to ensure that you see and participate in everything that interests you. Unlike the Folk Fest, you have far more than three days to fit it all in. Here's what to expect:

The Secret Stash: At Black Iris Gallery is "Public Eye: Civil Rights Case Study," made up of more than 400 photographs, films and artifacts from an anonymous donor who discovered the treasure trove of surveillance materials being thrown away. "Realizing the importance of surveillance photos and film of public events like busing protests, Black Panther marches and demonstrations on both sides of the Vietnam War issue, he brought it in, asking what our take on it was," says Benjamin Thorp, curator at Black Iris Gallery. "We're showing it in as transparent a way as possible, not trying to load it down with a political agenda. We're just trying to show the socio-political landscape that was happening in Richmond from 1963 to '73." 321 W. Broad St., Jan. 17 through Feb. 28.

Public Debate: Organized by the Valentine Richmond History Center in collaboration with Richmond magazine, the "Community Conversations" series features five monthly discussions about various Richmond locations, including the riverfront and Monroe Park. A moderator will lead each talk, highlighting perspectives from the past and present, to try to propel the community to a dialogue about the region's past and how it can positively shape the future. The first conversation, Shockoe Bottom's Future, with Chris Dovi, is Jan. 7 from 6-8 p.m. at Arcadia, 1700 E. Main St. Details on the February through May talks are at richmondhistorycenter.com. 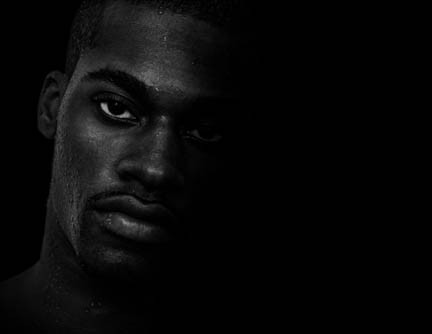 21st Century Body Politics: Elegba Folklore Society's Cultural Center shows "Body as Art: Photographs by Thierry Laurence," a series of black-and-white photographs manipulating light, shadow and water to convey the artistic essence of the black male body. "Thierry Laurence has a way of revealing invisibilities of the human spirit through his photographic eye. He captures an essence that, when framed, is immediately accessible. The images are intimate and beckoning, communicating both place, as self defined, and identity," explains Janine Bell, Elegba's artistic director. "Photographs are mirrors on the world. More than the importance for people to see 'Body as Art,' it is important for people to feel it, to observe the quiet resolve that speaks in affirmation of what is." 101 E. Broad St. through Jan. 31.

Game Changers: Whether or not you were there, the images in "Signs of Protest: Photographs from the Civil Rights Era" at the Virginia Museum of Fine Arts will resonate with the passion of people willing to stand up for their beliefs. With an emphasis on civil rights leaders Martin Luther King Jr., Malcolm X and Stokely Carmichael, the 25 photographs convey far more of a turbulent decade's culture of resistance than any history book could. "Doing the research for this exhibit, I realized a lot wasn't in the boiled-down history we're taught," curator Sarah Eckhardt says. "Stokely was so young, only in his 20s, and Martin Luther King was just 39 when he was killed, so in his 20s when he began. For a younger generation like me looking at this exhibit, these photographs open up histories less told." Of the 25, 22 are new acquisitions for the museum, so never before shown here. 200 N. Boulevard, Jan. 11 to Aug. 3.

Modern Day Activism: Combining elements of portraiture and social documentary, the photographs and videos of LaToya Ruby Frazier's "A Haunted Capital" at VCU's Anderson Gallery portray her family and hometown of Braddock, Penn., once a bustling manufacturing town and now characterized as an economically depressed ghost town. "Her work strikes a pretty perfect balance between the personal and the documentary," says the gallery's director, Kistler. "It harkens back to the work of photographers like Dorothea Lange but also intensely personal with nitty-gritty details of her hometown and family to make a singular body of work." Informed by a socially activist stance, Frazier focuses her lens on her grandmother, her mother and herself, addressing issues of self-representation and how the histories of individuals and communities intertwine. 907 W. Franklin St., Jan. 17 to March 9.

Art in the Everyday: For a cultural lesson that crosses the boundaries of hair salons and art galleries, check out 1708 Gallery's "Hair Craft Project," the brainchild of artist Sonya Clark of VCU's craft and material studies department. She asked a group of local hairstylists to braid her hair, demonstrating their signature styles, with the finished styles and stylists photographed by Naoko Wowsugi. The next layer of the project was giving the stylists canvases hand-stitched with threads to simulate hair to braid, expanding their aesthetic to a nonfunctional purpose. "It was Sonya's project but what was interesting was expanding the idea of creativity," says Emily Smith, the director of 1708. "The aesthetic of braiding is very like art-making. The skills are just as compelling and remarkable as traditional art skills." The finished canvases will be exhibited alongside the documentation. 319 W. Broad St., Feb. 14 to March 8.

Hometown Hero: The "Louis Draper Retrospective" at Candela Books and Gallery represents the first large-scale posthumous retrospective of midcentury black photographer Louis Draper, a Richmond native. Spanning the late 1950s to the 1990s, the exhibit ably demonstrates that despite being primarily a street photographer, his archive encompasses a wide range of artistic approaches and subjects. "There is a dichotomy in the work which we are presenting. Some early prints from the streets of Harlem and other boroughs have a potency even though the printing in some prints may not be as masterful as the some of the later works," says Stettinius, Candela's director. "This is true of some of the Harlem studio work. When printing commercial photographs, the print standard runs second to the look of the image in some cases. So while some of the prints may be workmanlike in the course of a busy day or week, the imagery is essentially a vernacular window into Harlem in the '60s and '70s." 214 W. Broad St., Jan. 10 to Feb. 22. S

Gallery talks, book readings, lectures, films and a read-in are scheduled in conjunction with the exhibitions. Details can be found on each venue's website.