Elusive Antidote: a Survival Story in the Fight Against Virginia's Opioid Epidemic

Scott Elmquist Loren Allison, 28, overdosed on heroin laced with fentanyl last year. She keeps a picture of her mug shot, below, on her phone.

Twenty-four hours after she was released from jail, Loren Allison returned to the hotel where she was living in the West End, injected heroin into her neck and overdosed.

Her boyfriend put her in the bathtub, unresponsive and purple-lipped.

Screaming, Allison’s 8-year-old daughter started beating him on the back, thinking he was trying to drown her mother. She had seen abuse before.

The boyfriend didn’t stick around. There was a warrant out for his arrest. So he dropped the daughter off with a friend on the second floor and called 9-1-1 from the road.

Allison remembers none of this.

She found out only after she was sent back to jail, her mother describing the account to her over the phone. It brought her to tears.

“Hearing all of this in jail and not being able to do anything — I was so powerless,” Allison says. “It was the worst feeling in the world, because I couldn’t comfort my daughter.”

She has three other daughters too, all of whom have been taken away.

But her March ordeal became a turning point.

“That was my moment right there,” she says. “I knew I had to get help — something had to change. I could not continue on like that.” 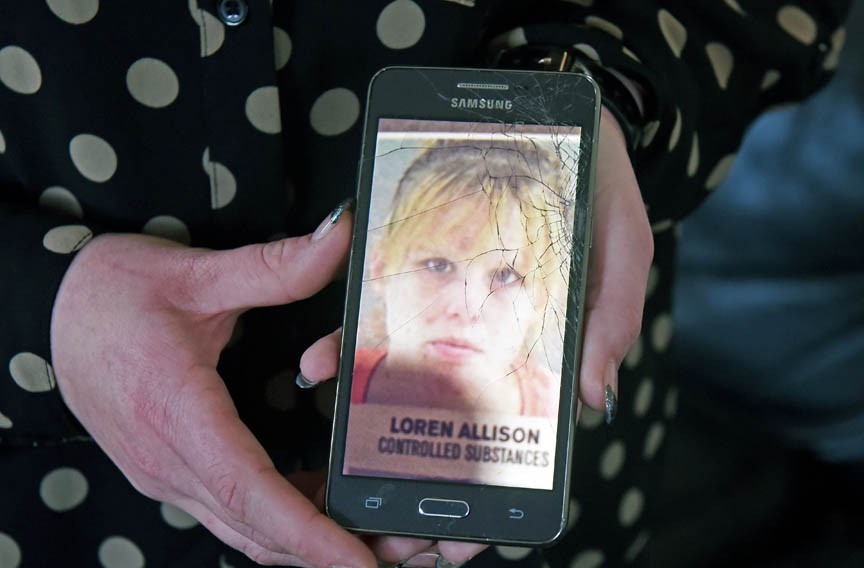 Allison is one of the fortunate ones: She lived.

In 2015, 806 people died from opioid-drug-related deaths in Virginia. By the first half of 2016, the number of fatal drug overdoses in Virginia was on track to increase 35 percent from the year before.

Part of the crisis stems from the rise in heroin laced with fentanyl, a narcotic pain medication used as surgical anesthesia. It was in the dose Allison took that night at the hotel, she says. Combined with her fragile sobriety, it was nearly lethal.

“They had to hit me with the naxolone twice in the hospital,” she says, “I guess from my body shutting down, when I overdosed.”

Naxolone treats narcotic overdose in emergency situations by blocking the effects of the drug. The Richmond Ambulance Authority reported a steady increase in the number of times it had to administer the treatment last year.

But the antidote is a salve, a last-ditch effort. Stopping addicts from using to begin with is a more complicated, challenging task.

With the General Assembly gearing up for its 2017 session, such stories as Allison’s may help policymakers understand how they can intervene before the overdose — and how easily addicts can watch their lives fall apart. 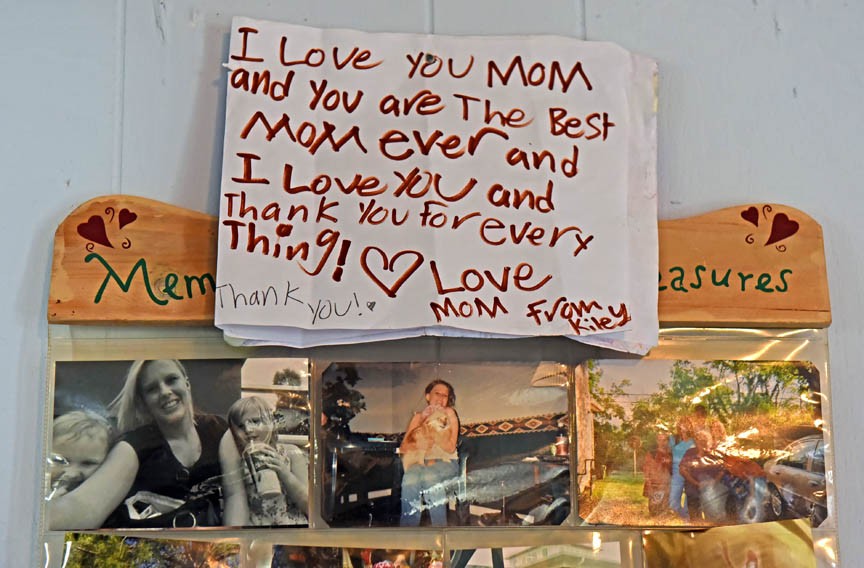 Allison has been clean and sober since April 4,and says her family sustains her. But it’s been a long road for the 28-year-old, who started using drugs more than a decade ago.

She grew up in the West End and attended Short Pump Middle and Tucker High schools. “I started drinking at a young age,” she says. “And smoking weed. Then I discovered everything else.”

She switched to cocaine and Xanax and dropped out of school at 17.

“I discovered pain pills, hydrocodone and all of those, when I had my teeth worked on,” she says. “I had a wisdom tooth removed. I realized, if I took more, it made me feel different. And it was off to the races.”

Like other prescription painkillers, hydrocodone is an opioid, a drug that binds to particular receptors in the brain, spinal cord and digestive tract. Heroin and morphine are others — all highly addictive.

Her mother and stepfather were loving and supportive, she says.

“They knew something was off with me. I weighed 100 pounds. My face was always broken,” she says. “But I convinced myself and them I didn’t have a problem. I guess it was too much of a touchy situation for them to want to deal with or handle.”

A series of abusive relationships, doctors she visited during pregnancies and a job as a stripper put her in contact with all the wrong people and substances.

“Especially being that age and having a social life, it’s just so easy to get [illegal drugs],” she says. “There’re drug dealers everywhere. It’s not hard to figure out, and once you figure it out, it’s over.”

She struggles to remember the age that she first tried heroin — 24, she thinks. She’d recently lost custody of her third daughter, after which doctors told her she couldn’t conceive again. (“But they wouldn’t tie my tubes because of my age and health risk,” she says.) She was quickly addicted and tried to quit by herself.

Allison found out she was pregnant with her fourth daughter about four years ago, while going through heroin withdrawals. It was a high-risk pregnancy with serious cramping and pain.

“They put me on bed rest and they prescribed me Percocet my whole pregnancy,” she says. “And as an addict, of course, I was like, ‘OK, if they’re prescribing it to me while I’m pregnant, it can’t be that bad.’”

She left the hospital addicted to prescription narcotics and returned to her boyfriend, the father of her youngest, the man who left her in the hotel bathroom. He was injecting heroin, Allison says — even more dangerous than smoking or snorting it — and convinced her to do the same.

“That’s when my life took a complete turn and just went completely downhill,” she says. “It was the numbing feeling times 10. I couldn’t do anything unless I had drugs in the morning to feel OK and go about my day.”

Allison has four daughters, ages 9, 6, 4 and 3. Her voice falters when she talks about what she’s put her children through in their short lives. They witnessed a boyfriend of four years direct a pit bull to attack her, she says, throw her through furniture and jab a Phillips head screwdriver into her leg.

“Even the relationships I thought I had with my children, they weren’t real relationships, because I was so high,” she says. “I was always so mentally unstable and messed up and depressed, a walking zombie with no feelings. So I really wasn’t there for them, even though I was physically.

“Emotionally, mentally, spiritually, I was dead.”

But she takes responsibility for her drug use, she says, quick not to blame the other active addicts around her.

“At the end of the day, I made my own decisions,” she says. “I’m a big girl. I could’ve said no. I could’ve ran or anything. I have resentments. But I did it to myself.”

Allison tells her story from an unassuming house in Glen Allen, where she serves as leader of one of the recovery homes run by the McShin Foundation. She appealed to the nonprofit after that call from the jail, and was released to it. 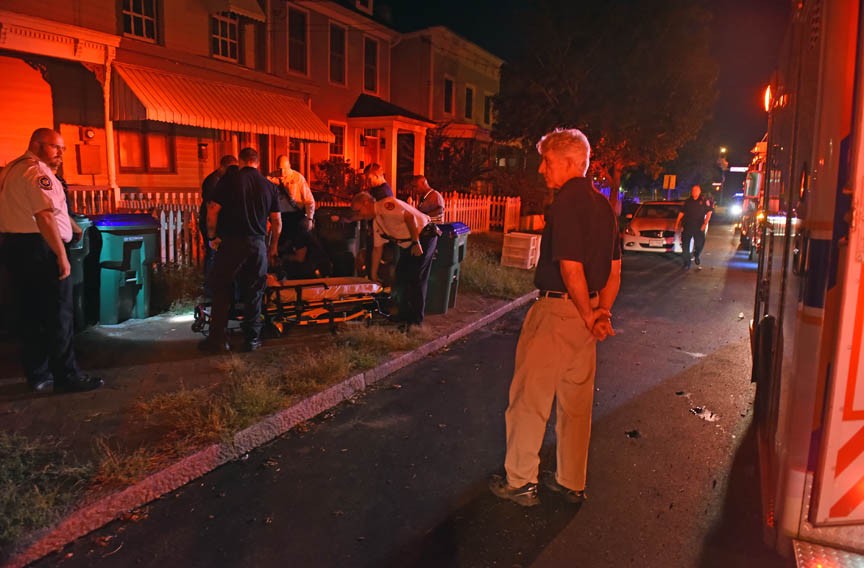 After months in recovery, Allison says she’s earned her parents’ forgiveness and trust.

The courts gave her permission to take two of her daughters to meet another one in Kentucky in November.

Allison describes this step proudly, and the gathering of daughters, one of whom she hadn’t seen in two years, with elation. She sits straight up in her living room chair, her blue eyes steady and even.

Asked what she thinks drives the opioid crisis, she suggests that the availability of narcotics is a big problem. But her addiction experience is marked by thorny interactions with the law and doctors, too.

“Throwing someone in jail isn’t the way to go about it,” she says, of her 30-day stay at Henrico County’s western jail. “Locking them in a cage, telling them they have a problem, but we’re not going to do anything about this problem.”

Besides, she says, it’s just as easy to get drugs in jail. And none of the doctors she saw during four pregnancies asked about her history with drugs, she says.

When the General Assembly opens this week, it will consider a budget and legislation aimed at targeting the crisis [see sidebar at left].

But whatever laws are enacted or budget amounts allocated, those on the front lines say a variety of solutions are needed for prevention, treatment and intervention.

Henrico County’s eastern jail in New Kent County has a lauded, intensive addiction therapy program, but there isn’t enough space for all addicts.

Locally, there are few places where people struggling with addictions can turn. Caritas, a nonprofit provider of services for Richmond homeless, has filed an application with the city to create a 200-bed shelter in Manchester for low-income female addicts.

The McShin Foundation has 125 beds at its recovery homes and an average stay of five to six months, says its chief executive, Honesty Liller. The voluntary program can house seven people for a year for $50,000 — more people if they stay a shorter time.

Allison credits McShin with saving her life, giving her a foundation that she wouldn’t have received outside of the program.

“When I first came into recovery,” she says, “I didn’t understand why all these people were so happy, why they were hugging and greeting me, telling me they loved me, and they didn’t even know me.

“I thought it was like a cult,” she says. “My whole life, since 15, I’d been using some sort of substance to alter my moods. And I wasn’t happy because I didn’t know how to be, for the longest time.”

The beginning of recovery was her greatest challenge — one she could never do alone, she says. She cried for three weeks straight.

“When you get your feelings back, when you put the drugs down, you actually have to feel all those feelings that you numbed for so many years,” she says. “And you feel every bit of shame and guilt and remorse. And it’s painful. It’s very painful.”

But Allison’s committed to the daily struggle, she says. She has visiting rights with three of her four daughters, and is preparing for a court date soon to win the right to see the fourth.

“On days where I want to give up and say, ‘I don’t want to do this today,’” she says, “I think of how far I’ve come and my children — how they didn’t ask to be here, to have a mother who’s an addict.”

This week, she returns to school at J. Sargeant Reynolds Community College where she plans to earn her GED and start college classes. She wants to work as a counselor for women victims of domestic violence who are struggling with addiction.

As a house leader at McShin, she helps the 10 other women that come through the program at the home.

“They’re struggling and I hear so many stories. I see them broken, like when I first walked in,” she says. “And that right there, it helps me get through the day — that I’m able to show somebody else how to live or lead by example.” S