Robert Pattinson carries the weight of the circus on his brow in "Water for Elephants." 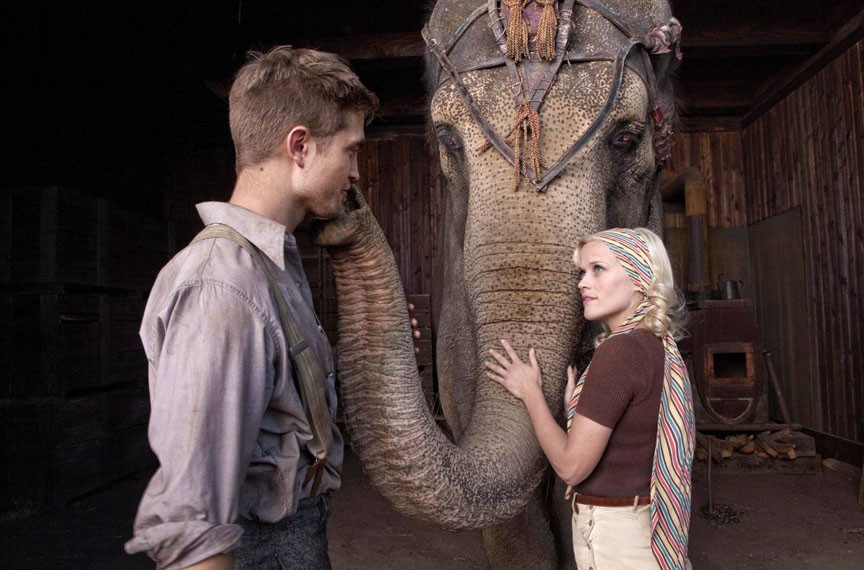 Here's one thing "Water for Elephants" has going for it: good-looking actors. Like, fourth-dimension good-looking, and not just the human kind, either. There's a pachyderm at the movie's heart that will knock your socks off with cuteness, provided that you haven't already swooned at the sight of Robert Pattinson's thick eyebrows or Reese Witherspoon's adorable little pointy chin. The rest of the affair is too often average-looking by comparison, kind of on par with a second-tier traveling circus, which is what it's all about.

The movie tells the story of Jacob (Pattinson), whose education at Cornell University is interrupted by the tragic death of his parents in a car accident. In grief and bewilderment Jacob hits the road and ends up with the circus. This is a questionable scenario, given Jacob's nearness to his Ivy League degree, but one that must be accepted with little fuss so we can get on with the story.

The circus is run by August (Christoph Waltz), a severe man whose ethics and good humor are frequently tested by the economics of running such a rickety enterprise. You quickly get the feeling that he fails most of these tests, even if one applies the liberal standards of the Third Reich. When August finds Jacob aboard his train and tells his men to throw the youngster off, he doesn't mean slow down first.

The order is rescinded when August learns that Jacob studied to be a veterinarian, which leads to a promotion from train-track mulch to animal care. Animal care means shoveling manure and gingerly feeding buckets of nasty food to pissed-off lions, but Jacob is grateful for any job during the Depression.

By the rules of Hollywood melodrama this new life must soon be complicated by a female. The movie hands Jacob two of them. One is the boss's wife, Marlena (Witherspoon), and the other is a recently acquired elephant named Rosie (an Asian elephant named Tai). Both are browbeaten and vulnerable but spirited, and Jacob falls for both of them. That pretty much dooms him with the boss.

August, being a fair man, beats Rosie and Marlena with equal gusto. That impels Jacob to try to save them both, but the movie winds up being much less affecting than its double jeopardy would suggest. Witherspoon, for all her charm, never connects with the role the way one of her less perky contemporaries might, one who looks less likely to tell August to kiss off. The "Legally Blonde" actress does much better in comedy, and she never fully clicks with Pattinson. When Rosie is introduced the movie loses by addition, grinding to a halt with the extra weight of yet another conflict.

One wonders how much richer "Water for Elephants" could have been without an additional love story constantly interrupting the Manichaean struggle between August and Jacob. The idea of these two opposing natures wresting the circus' moral center from each other during the course of the film is at least as interesting as whether Jacob and Marlena will go to bed. As it is, we get "Billy Budd" by way of "The Notebook," with a dose of "Dumbo" for good measure. None of these elements is a failure on its own but neither do they combine into an irresistible whole.

It's difficult to single out what keeps "Elephants" from the big top because the movie isn't without merit. A commendable re-creation of the period, it doesn't try to make its characters into antique curios or eccentric misfits. Nor is the love story saccharine sweet or Christoph Waltz's fine performance taken too far in its sadism. Another great strength is the film's depiction of the circus as a seedy and sorrowful enterprise, resisting the temptation to take it in a more family friendly direction. Look closely and you'll see all of the grime, sadness and shady dealing usually kept hidden from us rubes.

If it's not conflict the movie lacks, it's magic. When Jacob and Marlena finally kiss, and Jacob and August engage in their final struggle, you ought to feel a huge explosion of relief, but the movie instead drags, culminating in an epilogue that feels as safe as it does quaint. All these good-looking people and fine performances lack nothing but the old-school showmanship to send them roaring down the rails. (PG-13) 120 min. S