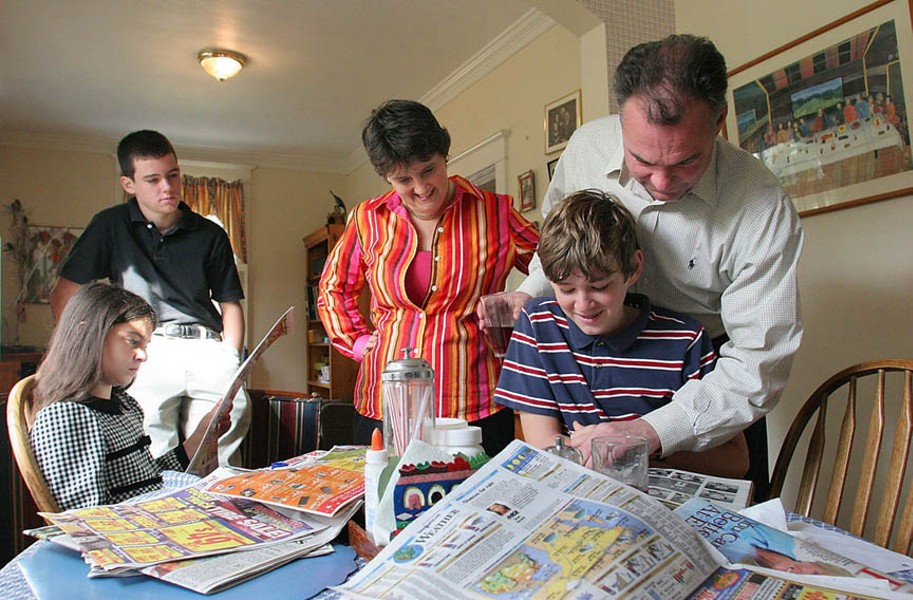 When Hillary Clinton picked Tim Kaine as her running mate, Richmond fans waited with bated breath to see how America would receive its homegrown politician. They sighed with relief when reviews came in.

Collective wisdom drew Kaine in the image of America’s dad, an earnest straight shooter prone to mildly embarrassing antics. Never angry when you screwed up, just disappointed. A youth group leader, a soccer dad with a harmonica habit.

“Tim Kaine is your friend’s dad who catches you smoking weed at a sleepover and doesn’t rat you out but talks to you about brain development,” podcast host P.J. Vogt wrote on Twitter.

It was fitting for the man who taught carpentry and welding in Honduras among Jesuit missionaries — during time off from Harvard Law School — and who has remained relatively blemish-free for more than two decades in politics.

“When the priest says, ‘peace be with you’ at Mass you can always hear Tim Kaine’s voice the loudest saying ‘AND ALSO WITH YOU!’” BuzzFeed culture writer Anne Helen Petersen theorized.

The vice-presidential candidate almost became America’s heartthrob. BuzzFeed collected images and reactions to pictures of youthful, dashing Kaine. But then he played with balloons and spoke Spanish at the Democratic National Convention and “folksy dad” won out.

“I just want Tim Kaine to make me some scrambled eggs when I’m sad and ask me, ‘What’s wrong, scout?’” another Twitter user wrote.

Alexandra Petri, writing for The Washington Post, called Kaine America’s stepdad: “He knows he cannot take the place of your old dad, but he will do his best. He will be firm but fair. Tim Kaine left you some yogurt in the fridge because he knows how you like yogurt.”

Toward the end of the campaign, the harmonica came out more frequently — on “The Late Show with Stephen Colbert” and at campaign stops. Esquire “reviewed” his harmonica performances.

As the rest of America discovered that unwieldy eyebrow, comparisons flew in. He looked like the Joker from Batman, “The Simpson’s” Ned Flanders or the mayor of Whoville from “How the Grinch Stole Christmas!”

“Tim Kaine is the neighbor who raked the leaves in your yard because they were from his tree anyway, don’t even worry about it,” Drew Schnoebelen tweeted.

Kaine’s attempt at a Donald Trump impression during the vice-presidential debate sealed the deal. And by October, Buzzfeed had collected “17 Pictures That Show Just How Dad Tim Kaine Really Is,” many of them from his time in Richmond.

So even though we won’t call him vice president, the father of three seems to have garnered one national accolade: Dad.

What about the children who know Kaine best as Dad? The senator filled us in on what they’re up to:

Nat Kaine: He turns 27 with this issue’s publication date. Graduate of George Washington University. A Marine Corps captain, he had two deployments in his first four-year stint, and has re-upped. His next assignment begins Jan. 15, helping launch a Navy ROTC program at the University of Maryland. He’s engaged to be married in July.

Woody Kaine: As a teenager, he could be spotted biking from the Executive Mansion to Maggie Walker Governor’s School when his Dad was governor. Now 24, he’s a graduate of Carleton College in Minnesota. He is a visual artist who works with Minneapolis Park and Recreation.

Annella Kaine: The 21-year-old is finishing her senior year at New York University. She’s set to graduate from the Tisch School of the Arts in theater. -- Jason Roop