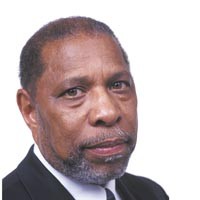 Richmond's black history, recently rediscovered beneath Shockoe Bottom's patchwork of parking lots, doesn't all date to the days before the Civil War.

Along with the city's slave-trade history, there's a more recent fossil that's resurfaced with a bone to pick about development plans — baseball and otherwise — in the city's most historic neighborhood.

Former City Councilman Sa'ad El-Amin, who in 2003 pleaded guilty to federal charges of fraud and conspiracy, has re-emerged as a voice for black history preservation in the Bottom.

“You can only stay submerged for so long,” says El-Amin, who returned to town in 2006 after time spent in federal prison in Kentucky. He teaches American and Virginia history at Tawheed Prep School in north Richmond.

In May, El-Amin sent a position paper and letter to city leaders, asking them to look past the baseball proposal to the moral responsibility of preserving Richmond's long-buried slave history.

“I fear that the curious silence regarding the slave history of the Bottom strongly suggests that this consideration will not be a serious factor in site selection,” El-Amin writes. “I speak for the dead, the unborn and the silent majority.”

El-Amin's emergence isn't random. Shortly after his 1998 election to City Council, he revived the Slave Trail Commission and served as chairman. More recently, he says he's revived his Society for the Preservation of African-American History and Antiquities, hoping it will become “both an advocate and a developer.”

“We're going to seek to take charge of our stuff, and see that it's taken out of the hands that have been … negligent,” he says, suggesting his organization could be the direct owner or a guiding force in preservation efforts.

El-Amin, who also opposes GRTC's plans for a bus transfer station at Main Street Station, wants the city to use some sort of historic zoning classification to protect the area. “Right now it's sitting in the hands of speculators or property owners who have no care in the world about the historical significance.”