eighth blackbird at the Modlin Center 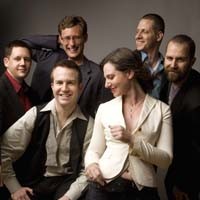 Classical contemporary music has a reputation of being just another strange form of modern art, in which visual statements are replaced by nonsensical audio arrangements and noise played on everyday objects. While they play on their fair share of water-filled wine glasses, toy pianos, brake drums from cars, even something called a thunder tube, the members of eighth blackbird are also about cohesive composition on conventional instrumentation, if only with a few extended techniques. Recently earning a Grammy for “Best Chamber Music Performance” for its latest album, “Strange Imaginary Animals,” the Chicago-based sextet is scheduled to explore the influence of rock music on the classical genre with “Spam.” The concert, which will feature odes to the Beatles and Led Zeppelin, comes to the Modlin Center for the Arts on Wednesday, Sept. 16, at 7:30 p.m. $10-$20. 289-8980. - Mike Hilleary