Their plans could fizzle out fast or turn into gold mines. But for Richmond business dreamers, the creativity is flowing.

"Discontent is the first necessity of progress." — Thomas A. Edison

Invention, ironically, is nothing new. But in this economy it's no surprise that entrepreneurship seems to be making a comeback. Americans are always looking for solutions to problems. For a better way of doing something; and for cash. Speaking of, someone's going to win $10,000 this week in the first Start-Up Competition, sponsored by the Greater Richmond Chamber of Commerce's I.E. entrepreneurial initiative and Tumblr (Style Weekly is a media sponsor). The rules were simple: Submit an idea. Be a business that's younger than a year. And be local. The contest, which ran in conjunction with seminars in entrepreneurship, brought in more than 140 entries, which were culled into a list of finalists through online voting. After a pitch session to judges on Thursday, June 21, at CenterStage — a free program open to the public — a winner will receive $10,000 and six months of office space. From the wide-ranging submissions, we selected eight ideas that fascinated us. Not all of them made it to the finalist stage. But when it comes to capitalism, they're always in the running. — Jason Roop

The Problem: Ordering the popular rum cocktail, the mojito, can be a tricky business. Inevitably the bar will be 86'd on mint to muddle, out of simple syrup and too busy to make more, or have some other excuse — laziness, more often than not. And sometimes, "it might just be a seasonal issue regarding whether there even is fresh mint," says Susan Martinson, a self-proclaimed mojito orderer. "It's just not always readably available — and let's be honest, muddling isn't something every bartender wants to do, especially when they're busy."

Proposed Solution: A spearmint-infused simple syrup that can be used not only as a natural substitute for muddled mint in mojitos, but also as a flavoring agent in nonalcoholic beverages and cooking.

My A-Ha Moment: During a trip to a local herb farm, Martinson tasted homemade lavender lemonade that inspired her to begin experimenting in her kitchen with mint leaves and simple syrup. She says she made sure to use all-natural products, unlike her former employer, Starbucks — whose flavoring syrups in its premium-priced, high-end coffee and tea drinks contained artificial flavors, sweeteners, colors and preservatives.

Where Things Stand: The syrup's available in more than 95 Virginia ABC stores and numerous on-premise bar and restaurant accounts. The goal is to expand to more stores and add new flavors to the line. 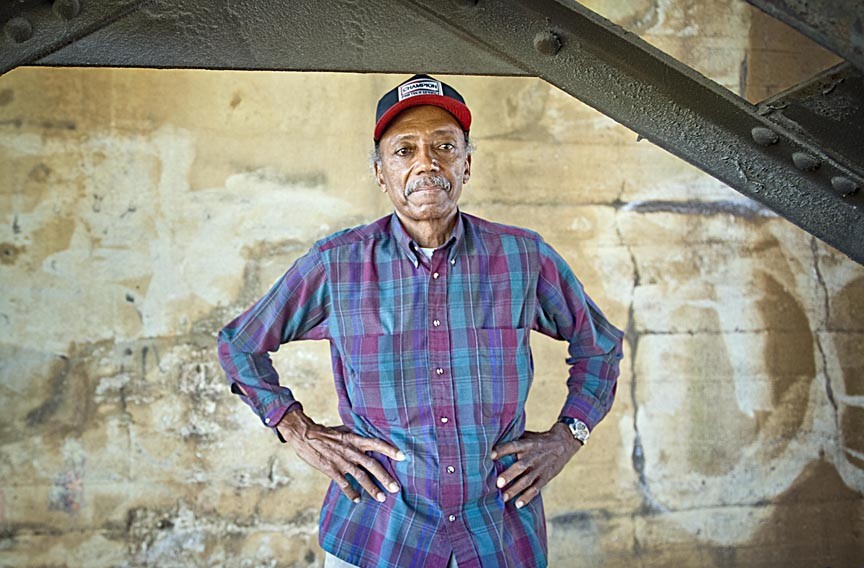 Proposed Solution: Propel Forward, a device that catches air flowing underneath moving cars to generate energy for an electric motor. After starting the car normally, motorists could improve their gas mileage once their car attains enough speed. The device could be installed under all four wheels and possibly under the hood and trunk of the car. The size of the devices would change depending on the size of the vehicle. It's just one of many products that former machinist and quality assurance inspector Henry Street is tinkering with.

My A-Ha Moment: "Around eight months ago I was pumping gasoline at a service station and I looked at the cost per gallon," Street recalls. "I said, 'There's got to be something in the air that can move our vehicles.' A few days later it snapped in my mind."

Where Things Stand: Going through the patent process.

The Problem: For all of the bells and whistles on modern cars, communication between vehicles still relies on untrustworthy gestures or horn-honking that varies from driver to driver. "We drive around and we flash headlights, which a lot of people don't understand," says Donald Steeber, who runs a general contracting firm with his son, Allen. "We try to use hand motions you can't see. People tap their brakes. It creates problems, people get mad and there's road rage."

Proposed Solution: Using amber lights installed at the top of the windshield and back window, the KGA Auto Signal Device gives drivers an additional way to communicate with each other — say, to let another driver pass, or to go first at an intersection. Each light has a button that can be installed on the steering wheel.

My A-Ha Moment: There was no big "a-ha moment," Steeber says, but he began thinking about this problem a few years ago. "I grew up early enough to remember when vehicles didn't have turn signals," Steeber says. "You had to roll your window down and put your arm out to take a turn." Within a few years of their introduction, everyone understood what a turn signal meant, and they became standard issue on cars.

Where Things Stand: Steeber has constructed a working prototype, and looks to work with a company that can market the product.

The Problem: Having to change shoes multiple times in the course of a day.

Proposed Solution: Footwear with interchangeable parts to fit wearers' changing needs. "You just stick your foot inside and twist, which locks it into place," says Mason Gould, a rising 10th grader at Clover Hill High School in Chesterfield County. Instead of removing work boots for dinner, for example, wearers simply can change out the sole. The shoes can transition between high-tops and low-tops, and style-conscious wearers also can change a shoe's colors. Customers can give input on the design of their own pair.

My A-Ha Moment: "It was just a little idea for school," Gould says. He and two classmates thought it up as part of their high-school tech-ed class. "We came up with it out of the blue." 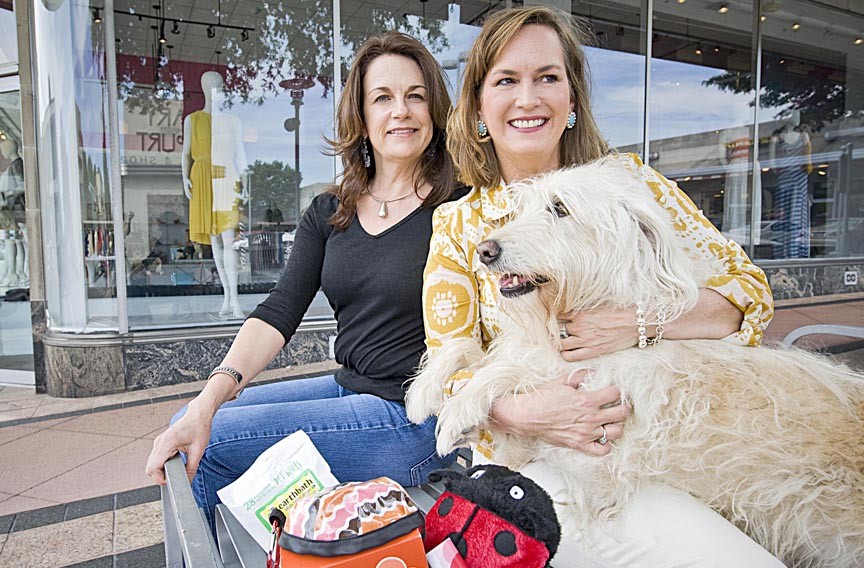 Entrepreneurs: Beth Halloran, 49, and Ann Glenn, 49, with inspiration from canine companions Hallie, 12, and the late Cookie, who died in April

The Problem: It's difficult for charities, especially dog-related ones, to raise money in today's economic climate. It's also tough to keep a dog happy and healthy with the right treats, food and toys.

Proposed Solution: Wag-in-a-Box, a socially driven website for dogs and their owners. Customers pay a monthly fee and receive a box of specially selected treats, toys and other products for their dogs, plus discounts on items that can be bought online or at local retailers. They also get advice and the ability to connect with other dog lovers. A portion of the proceeds go to charities. "Our goal is to connect every subscriber with at least one local rescue or animal-welfare organization so that every pampered pet can help a canine cousin in need," Glenn says.

Our A-Ha Moment: "We met while working at a technology start-up," Glenn says. "We were single dog moms and busy marketers, so we connected immediately. During long dog walks in James River Park, we talked about how to create a business that would help dogs live their best lives. When one of our dogs was diagnosed with cancer, we stopped merely talking and started building."

Where Things Stand: Start-up phase, including securing vendor partnerships and working on the creative efforts, and finding a local start-up that will manage the donation part of the business. The goal is a late-summer pre-launch and fourth-quarter launch. 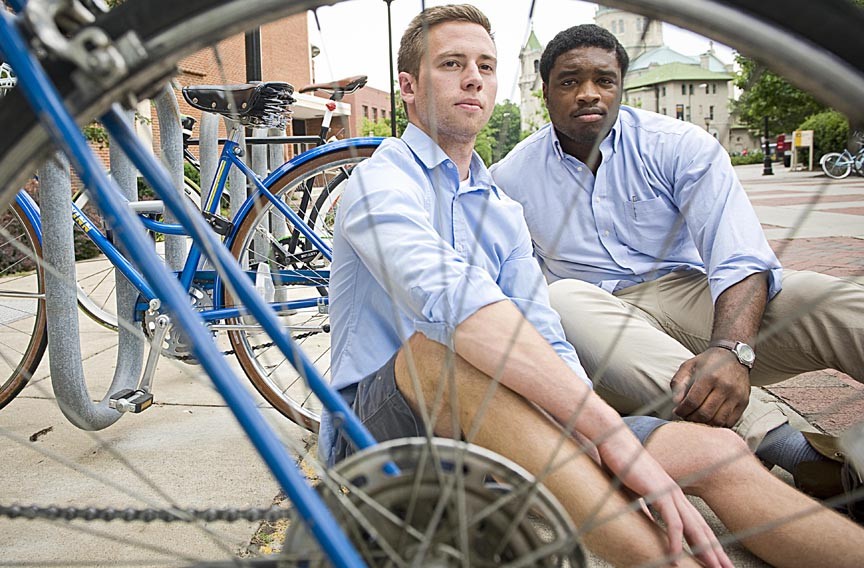 The Problem: While biking becomes ever more popular, available ways of locking bicycles up can result in thefts and vandalism. Personal bike locks aren't always efficient, and security is a huge concern.

Proposed Solution: CycleStay, a public bicycle security solution designed with college campuses and busy cities in mind. The bicycle rack comes with an integrated lock and security system that actively monitors bikes when owners aren't around. Members swipe key cards into the system to lock and unlock their bicycles. If anything occurs at a unit, the system sounds an alarm and sends a mobile alert to the user. "Peace of mind for our members is a big part of what we want," Callwood says.

My A-Ha Moment: "In my sophomore year of the entrepreneurship program at Virginia Commonwealth University, I worked on a project that was the beginning of CycleStay," Callwood says. "Justin was coincidentally working on a project that catered to the bike community as well. I realized working solo on a full business proposal could get rough so I interviewed a couple people and really clicked with Justin and Joshua. From there, we completely stripped down my project, combined it with elements of Justin's project and CycleStay was born."

Where Things Stand: Won the VCU Entrepreneurship Program business plan competition sponsored by the Richmond Association for Corporate Growth; were runners-up in the VCU da Vinci Center venture creation competition. Next up is finalizing details on design and engineering, then prototyping. Ideally they'll approach larger schools in the South or West where biking's even bigger. "We're also keeping an eye on the possibility of partnering with the Richmond 2015 World Cycling Championships coming to town," Callwood says. 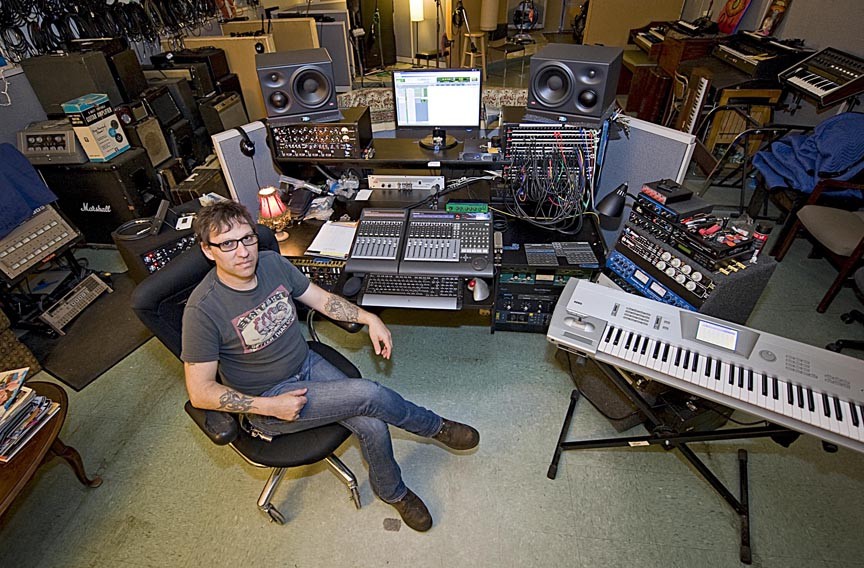 The Problem: A lack of space in Richmond for bands and other musical performers.

My A-Ha Moment: Daniel Deckelman, a longtime Richmond musician and recording engineer, was touring in Europe with his band Adam West. "Quite a few of the venues we played were co-op organizations that promoted live music events," he says. "Almost all of these co-ops had applied to the state or local government to rehab existing structures that had not been in use for quite some time. With the help and funding of the state, they were able to open doors on youth centers that served the community at large through these vacant buildings with a host of educational programs."

Where Things Stand: A couple of decibels past the idea stage. "A solid outline and general budget is in place, along with interest from parties wishing to participate directly," Deckelman says. "So I can say we're at the team-building and goals stage right now."

The Problem: Transporting children in and out of the car while running errands.

Proposed Solution: To avoid the extra hassle of taking kids into the store with you, Cokema Ba pitches a service for supermarkets to have a team of trained child-care workers available to accompany children in the car while parents shop. Failing this, she proposes that supermarkets create day-care facilities so parents can shop in peace.

My A-Ha Moment: A recent transplant from New York, Ba was unaccustomed to needing a car to get around. The added hassle of having to park and remove her 2-year-old and 9-month-old from their car seats began to wear on her. "Every time I went to Wal-Mart and parked, I'd look back and the kids were asleep," Ba says. "Or, it was pouring rain and I'd have to turn around and go back home." Continually waking up and moving her little ones to navigate the wilds of the supermarket was just too much. After the third time she returned from the store empty-handed because of the rain, she decided to do something about it.

Where Things Stand: The idea stage.