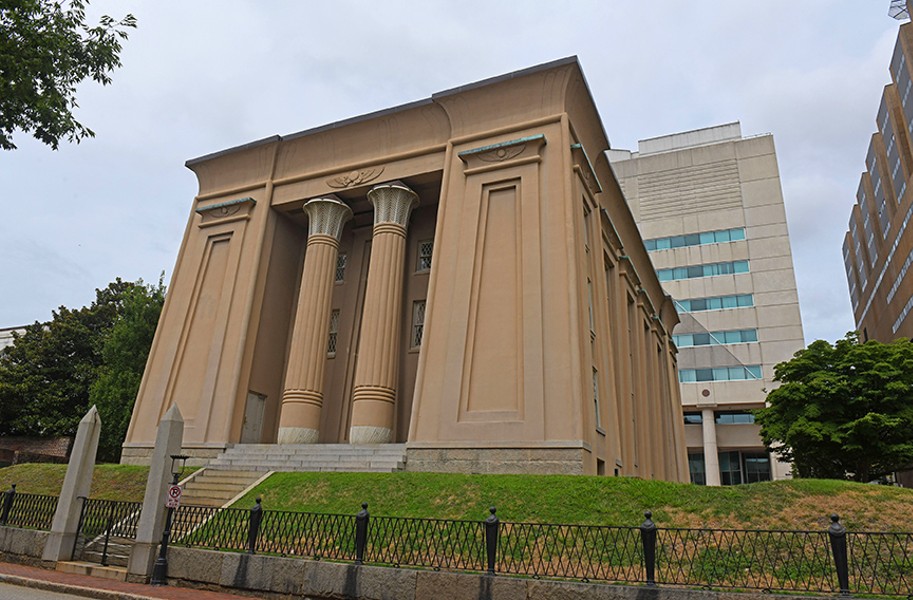 Scott Elmquist The national historic landmark Egyptian Building at 1223 E. Marshall St. was the first permanent home of the Medical College of Virginia and is now part of Virginia Commonwealth University.

“Treasures of Ancient Egypt: Sunken Cities” at the Virginia Museum of Fine Arts delivers a sublime and mind-bending experience. It’s a validation of why the West has long been captivated by the ancient art, architecture and crafts of this region of Africa. The exhibit’s 300 artifacts should mesmerize young museumgoers who are encountering such objects of beauty, antiquity, mystery and spirituality for the first time.

Westerners’ fascination with ancient Egypt stems partly from that culture’s religious and funerary traditions that are so different from our own Judaic- and Christian-based links to classical Greece and Rome. On a good day, individual thought and activity is cultivated and celebrated, not the whims and inevitabilities of a wildly complex orbit of gods and goddesses. Therefore, when Americans have drawn from the Egyptian aesthetic for architecture and design, they’ve done so sparingly and largely in funerary and prison architecture.

Richmond has a number of Egyptian revival structures built in the first half of the 19th century. Following the French conquest of Egypt in 1797, numerous pattern books were published and distributed in the United States that promoted using ancient Egyptian motifs in architectural design. A direct line can be drawn between those publications and the 1845 Egyptian Building at 1223 E. Marshall St. on the Virginia Commonwealth University medical campus. But an even earlier, never-executed Egyptian revival building had been proposed in 1812 to memorialize the 72 people who died in a theater fire in December 1811.

B. Henry Latrobe, a British-born architect who worked in Richmond, suggested a 45-foot-high pyramid (one can’t get more Egyptian than that) to mark a mass grave and entryway to a memorial church. When the scheme was deemed too expensive, the commission went to South Carolina architect Robert Mills. He designed the Monumental Church in 1814, which has a Greek revival temple front as well as a distinctive low dome crowning the sanctuary. This National Historic Monument looms majestically in the 1200 block of East Broad Street.

Perhaps no Egyptian form is more ubiquitous in Richmond than obelisks, four-sided upright pillars that taper to form pyramids at the top. They appear in almost every old cemetery here. Some of the finest examples populate Hebrew Cemetery (1816) and Shockoe Cemetery (1824), adjacent burial grounds in Jackson Ward on Hospital Street near North Second Street. An obelisklike form is the first object that visitors encounter in the “Treasures of Ancient Egypt” exhibition. This is the Naos of the Decade (380-362 B.C.), a small chapel to the god Shu. 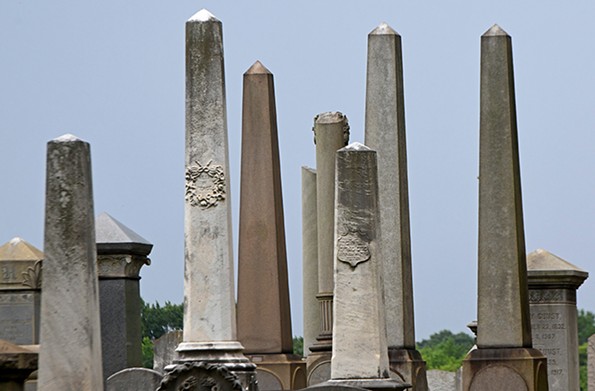 But of course, the ultimate local Egyptian revival design is the Egyptian Building on the VCU medical campus, built in 1845 by the Hampden-Sydney College medical school, whose programs had been housed in a Richmond hotel. School administrators engaged Thomas S. Stewart (1806-1889), a Philadelphia architect then designing a stunning Greek revival sanctuary for St. Paul’s Episcopal Church at Grace and Ninth streets.  A number of the church’s building committee members were professors at the medical college. Stewart had hinted at Egyptian design at St. Paul’s with the battered, or inwardly sloping walls at the base of the steeple. But for the medical school he used a dramatic hillside site to full advantage so it could be viewed from points east: Shockoe Bottom, Union Hill and Church Hill. Those views are now obscured by large buildings.

Stewart’s Egyptian Building combined a lecture hall and classrooms in a stalwart building of brick covered in stucco. At each end of the double-front building, he placed two colossal columns with palm-frond capitals. The building is enclosed by a Stewart-designed cast iron fence. It’s support posts are herms, featureless figures aside from human heads and feet.

When built, a local newspaper said the building contained “mystery in the style appropriate to this temple of medical science.” According to Calder Loth, a leading Virginia architectural historian, “No purer expression of the mid-19th century Egyptian revival exists in America than this exotic work.”

The interior of the Egyptian Building is striking too. It was renovated in the 1930s and given an Egyptian revival treatment in the art deco mode. The Richmond firm of Baskervill & Son was the architect. Thus the building exemplifies the two periods of greatest Egyptian-influenced design. The first based on the French conquest of Egypt and the other the discovery of King Tut’s tomb in 1922.

Why not extend the considerable pleasures of “Treasures of Ancient Egypt” by examining on foot such local treasures as the Egyptian Building at VCU and our city’s less visited cemeteries?