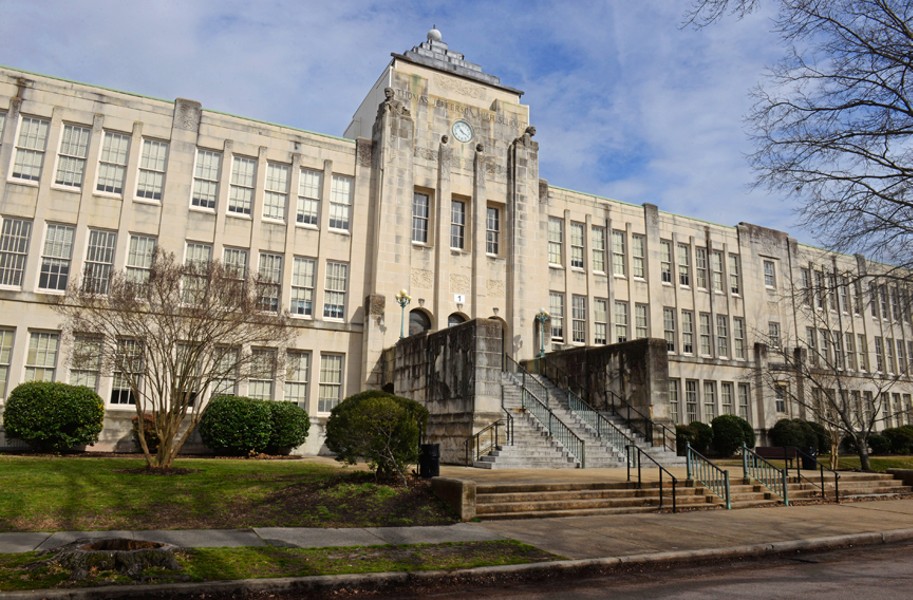 Scott Elmquist Thomas Jefferson High is one of more than 40 city schools with a poverty rate above 35 percent, but that may not be enough to receive Title I funding.

Thomas Jefferson High School soon will mark its 90th year. Located in the West End in an art deco building with a striking facade and complex interior, it serves students from all over Richmond, as well as offering specialties like International Baccalaureate programs.

The school is known for high administrative turnover and the same kind of poverty rates that plague many Richmond Public Schools. A recent online fundraising effort to replace broken furniture with modern tables, desks and chairs has sparked a conversation about the shortage of money for Thomas Jefferson. Now some parents are pushing the district to prioritize the school in its annual application for additional federal funding through Title I.

"We're always fundraising for the basics," says Betsy Milburn, whose daughter attends Thomas Jefferson. One of her older children attended Maggie L. Walker Governor's School, where she says fundraisers were vastly different. "At Maggie Walker we'd fundraise for clubs, sports, all kinds of stuff. It wasn't so the kids would have matching chairs, light bulbs or sanitary napkin boxes in the bathroom stalls. That's just not what we did."

Milburn, who explains that she's more involved in school efforts than many Thomas Jefferson parents are able to be, says her daughter will be fine regardless because of the resources available to her.

"She has me as a mom, we have resources, she takes advanced classes," Milburn says. "But it's not just about my daughter. It's about every other child who's in different classes. It's the average student in Thomas Jefferson who doesn't have those resources."

Milburn was one of the drivers behind last year's effort to identify and fix irregularities in Richmond students' high school transcripts. This summer she helped repaint bathrooms at her daughter's high school and she's been in conversation with the Virginia Department of Education, the Richmond Public Schools and her district's School Board representative, Liz Doerr, to push for Title I funding at Thomas Jefferson.

Title I, Part A, of the Elementary and Secondary Education Act provides funding to districts with high numbers of students from low-income families to help schools meet state academic standards. The federal program allocates a certain amount to each state education department, which distributes those funds to individual school divisions that apply and qualify. Which schools receive the money is up to the district. The Richmond administration ranks schools' needs based on the percentage of students who live below the poverty line. The funds can't go toward renovations or classroom supplies like furniture, but they can cover supplemental instruction, professional development, guidance and counseling services and extended-learning opportunities.

For the 2018-2019 year, the Richmond school division received $15.6 million in Title I funding, which it divvied up between 22 elementary schools, seven middle schools, three high schools and three alternative schools. According to the Virginia Department of Education, Armstrong High's poverty rate is 81.32 percent, the largest of the city's high schools. John Marshall and George Wythe, the other two city high schools that receive Title I funding, have student poverty rates of 72.44 percent and 56.8 percent, respectively. At Thomas Jefferson, 45.57 percent of students fall below the poverty line.

Under Title I guidelines, Thomas Jefferson technically qualifies to receive funding, because the minimum rate is 35 percent. But according to Lynn Sodat, an official at the state education department, many school districts like Richmond direct the bulk of those dollars toward elementary education, meaning middle schools and high schools usually need exceptionally high poverty rates in order to make the cut.

"School divisions actually can serve down, if they have the money to do so, to 35 percent [poverty rates]," Sodat says. "But a lot of our school divisions don't have the allocation to reward down that low." She goes on to note that the lowest-poverty high school that receives the funds is George Wythe, and Thomas Jefferson's rate is more than 10 percent lower.

"Huguenot [High] is between George Wythe and Thomas Jefferson, so they would also have to serve Huguenot, and then have to back off the lower levels," Sodat says. "I couldn't even say if it's in the realm of possibility."

As of Monday afternoon, the GoFundMe page for new classroom furniture had raised $7,443 of the $25,000 goal. Margarite Bell, who graduated in 1991 and has remained active in the school's alumni group, says she has a hard time deciding where to put her money when she sees so many different fundraising efforts spearheaded by parents and teachers rather than students.

"We need to be teaching the children how to raise money for themselves," Bell says, recalling student-organized fundraisers like carnation sales on Valentine's Day when she was a student. "I want to see that work. You don't see school spirit anymore, you don't see the kids really involved with the school. If they're not taught that, they won't have that."

Milburn agrees that there's value in encouraging student involvement, but it's not always that simple due to a lack of resources.

"To have a bake sale, you need to have money to get the supplies to make baked goods," Milburn says. "If you live all the way across town, you ride the bus to school, you have a single parent, your parent might not have time to go to the grocery store on demand and buy brownie mix, or even be able to afford that. That's just the reality."

In collaboration with the Tee Jay Vikings Fund, a nonprofit focused on making improvements at Thomas Jefferson, Virginia Commonwealth University and the University of Virginia Club of Richmond, the Parent Teacher Student Association will hold an anniversary event Monday, March 4. The event, called Education Divides in Modern America: a Conversation, will feature University of Virginia President James Ryan and L. Douglas Wilder School of Government and Public Policy at VCU interim dean Susan Gooden. Held at Thomas Jefferson, it will begin at 6 p.m., and PTSA member Dina Weinstein hopes it will facilitate a larger discussion about the issues facing urban schools.

"From the minute students step into a classroom they're getting different messages, and it's uneven around the city," Weinstein says. "This isn't a new situation here in Richmond, but I want to shine a light on it."