Echo Harbour developers have made it abundantly clear that they view the master plan and the residents who support it simply as obstacles. 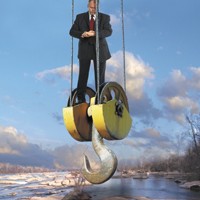 Students of urban politics looking for a textbook case of private prerogative colliding with the public interest need look no further than the most recent chapter in the saga of the Richmond downtown master plan.

In 2007 the city embarked on a months-long process to discuss, debate, formulate and finalize a new plan aimed at revitalizing downtown. Under the leadership of Rachel Flynn, the city's director of community development, hundreds of people participated in charrettes and meetings, literally helping design the plan. The participatory tenor of the process and forward-looking, positive tone of the plan itself attracted the enthusiasm of many ordinary residents. When City Council approved the plan last fall, the response from the public and City Council members was overwhelmingly positive and laudatory of Flynn's work.
The plan is based on a few significant principles: The key to reviving downtown is improving quality of life in the city, and the way to do that is by embracing urbanism — and not trying to imitate the suburbs.

This means creating two-way streets, slowing traffic, encouraging pedestrian use, moving parking lots underground, improving infrastructure and providing ample access to green space. Central to the plan is the James River itself, envisioned as the principal attraction of the city, Richmond's answer to Central Park. The plan baldly and boldly claims the river and access to it as a public good, and calls for public action to secure that good for present and future generations of Richmond residents.

It is important to recite a piece of history in order to make sense of the most recent controversy surrounding the proposed Echo Harbour condominium and hotel development on Dock Street. Should the public allow high-rise condos in a flood plain that blocks public view of the river, the very view that led William Byrd II to name the city Richmond? The developers, Falls Church-based USP Rocketts LLC, argue in effect that we should simply ignore the downtown plan, and its attractive vision for making the river the centerpiece of a revitalized downtown, in answering that question.

In the developer's view, what's important is not how use of that property fits into the overall plan to revitalize downtown, but whether it can be used in a way that maximizes revenue to the property owners. That single-mindedness led USP Rocketts' lawyer, James Theobald, to tell the Planning Commission on April 20 that the downtown plan failed to respect private property and even amounts to a regulatory taking.

That argument is absurd and needs to be challenged directly. The classic case of a taking is when a new environmental or planning regulation is passed that affects an owner's existing use of property. But the land in question (principally 3011 and 3021 Dock St.) is zoned for heavy industrial use, which doesn't permit high-rise condominium development.

That's why the developers need the zoning changed to pursue their project. But government is under no obligation to change zoning to maximize the profit potential of a particular piece of property. Indeed, the very idea that that could be a sound principle for urban planning is absurd. The city government's responsibility and obligation is to secure the public interest of the entire community.

Consequently, Theobald needs to drop the overblown, threatening rhetoric about “takings” and find a more plausible argument for the project. USP Rocketts acquired the land in the hope that it could convince public officials to change existing rules to suit its plans. That the developer has so far failed in that goal only means that it made a bad bet, not that the public owes it anything.

What about the purported economic benefits of Echo Harbour, the jobs and tax revenues the project might generate? That argument overlooks two key points.

First, any economic gains from the project need to balanced against the impact the development will have on quality of life for existing residents, not only in Church Hill but also citywide. The addition of roughly a hundred condos is no net gain if they harm the gorgeous view from Libby Hill Park and compromise one of the most historically significant locations in the city.

Second, the plan's vision of assembling connected open spaces alongside the river, usable by the public, holds far more promise as a strategy for improving the attractiveness of the city and luring newcomers. This is a historic opportunity to finally capitalize on the James River in a way that benefits all city residents. Studies show that public investment in urban waterfront parks are a winning proposition, with each public dollar invested commonly generating $4 to $5 of new private investment.

If the developers insist on continuing to push the Echo Harbour proposal, they should have the decency to frame their case in terms of the core goals laid out by the downtown master plan and supported overwhelmingly by the public: re-embracing urbanism, making a fully publicly accessible James River the heartbeat of the city, preserving and enhancing green space, and revitalizing all of downtown.

Instead of trying to argue that Echo Harbour fits into that vision, the developers have attacked the legitimacy of the process and made it abundantly clear that they view the downtown plan and the residents who support it simply as obstacles. That's why Flynn was fully justified in insisting at the April 20 Planning Commission meeting that further dialogue between her department and the developers would be fruitless.

That's also why it's worrisome that City Council President Kathy Graziano saw fit to admonish the Planning Commission to be “practical” in public comments during the April 20 meeting, and that the commission voted 5-4 to delay a decision on amendments to the master plan until May 4. Talk of being practical and realistic is often a warning that the public interest is about to be compromised, and there can be little doubt that USP Rocketts will be using the extra time to lobby its case and try to pressure the city into cutting a deal.

That's predictable enough. The only real question is whether the many Richmonders who enthusiastically engaged in the downtown plan process and support its vision will reject city politics as usual and push back. S

Thad Williamson is an assistant professor of leadership studies at the University of Richmond.