Stone’s Thrown Down in RVA at Brown’s Island
Sept. 9

Kick off the fall season at Stone Brewing’s first anniversary party featuring a full day of live music and craft beer by the river. Not just Stone beers either, the brewery’s including guest brewers Alewerks Brewing Co., Blue Mountain Brewery, Buskey Cider and Trapezium Brewing Co. Musically this $10 event features Pontiak, the Bright Light Social Hour, Jeff the Brotherhood, Richmond’s own No BS Brass, the London Souls and Lettuce (see our calendar pick on Page 29). Pre-party and post-party at the Broadberry.

A truly one-of-a kind event this fall, some of Richmond’s most critically acclaimed artists will perform their music backed by the Richmond Symphony. While many of these groups have performed with strings before, we can’t wait to hear how former Avail frontman Tim Barry’s blue collar, punkish-blues songs translate. See our interview with arranger Trey Pollard on Page 21.

Adam Ant and Glam Skanks at the National
Sept. 20

This flamboyant Brit was one of the first MTV video stars in the ’80s, but today Adam Ant may draw stares from younger people who mistake him for “Pirates of the Caribbean”-era Johnny Depp. Yet he's still out there playing great shows with hardly anyone walking away unimpressed. His colorful, percussion-led pop will make true believers of “Ant Music” in the live setting. You almost forget how many catchy pop songs he has in his catalog.

The Secret Sisters at the Tin Pan
Oct. 3

Beautiful harmonies abound with these two sisters from Muscle Shoals, Alabama, who’ve been compared to a female version of the Everly Brothers. Having toured with Bob Dylan, lost their label and filed for bankruptcy, the resilient duo signed with New West Records for a powerful and personal new album, “You Don’t Own Me Anymore,” produced by Brandi Carlile. Expect a mesmerizing show.

Dinosaur Jr. and Easy Action at the National
Oct. 8

Gandalf the Shredder returns with his original Dino lineup to rock like the grunge days never ended — or the ‘70s either for that matter. Don’t miss the opening act from Detroit: The raw power of Easy Action features John Brannon, lead singer of ’80s Midwest hardcore act Negative Approach. Brannon was one of the guys moshing with John Belushi to the band Fear when the latter group made an infamous, ban-inducing performance on “Saturday Night Live” on Halloween, 1981. Probably SNL’s greatest live moment.

Our biggest annual music festival is always a blast of a weekend come rain or shine. Right now, our early picks for this free event along the downtown riverfront include Memphis soul crooner Don Bryant, the king of juke-joint swing, Wayne “The Train” Hancock, Bitori featuring Chanda Graciosa and the go-go inspired sounds of some lady funksters from Washington, Be’la Dona.

Primus at the National
Oct. 25

The stomping, metallic crunch of its 1990 song featuring the lyrics, “[Too Many Puppies] are trained not to bark at the sight of blood that must be spilled so that we can maintain our oil fields” was close to an underground anthem during the first Gulf War. The power trio featuring bassist and singer Les Claypool has moved on over the past 27 years to embrace more genre-bending prog-funk, and it’ll be stopping here on its Ambushing the Storm tour in support of the first new album of all-original material in decades, “The Desaturating Seven” (ATO Records), inspired by an Italian 1978 children’s book, “The Rainbow Goblins.” 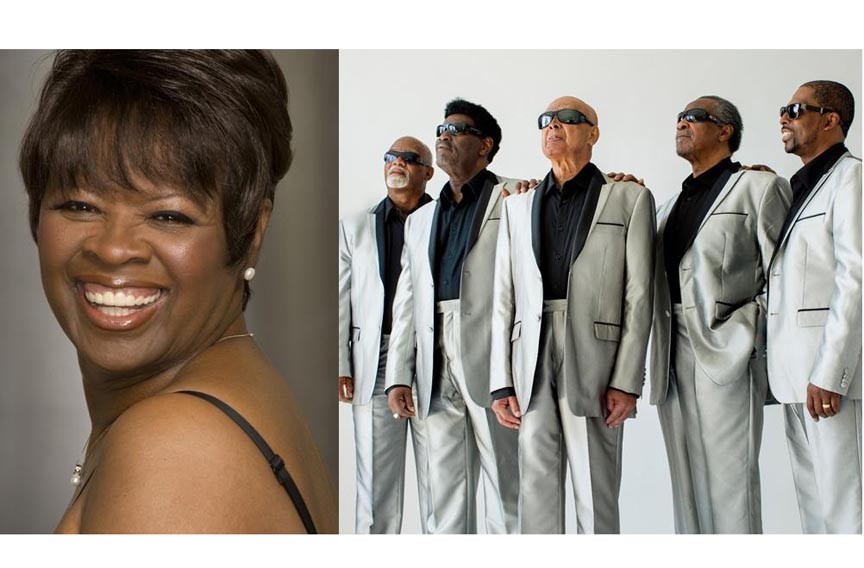 Irma Thomas and Blind Boys of Alabama at the Modlin Center for the Arts’ Camp Concert Hall at University of Richmond
Nov. 11

The “soul queen of New Orleans,” Irma Thomas has been making beautiful music for 50 years now. Still remembered for her 1964 cover of “Time Is on My Side,” the 76-year-old won a Grammy for best contemporary blues album in 2007. She’ll be joined by multiple Grammy-winning gospel group, the Blind Boys of Alabama, and the Preservation Hall Legacy Quintet. It should be a night of soulful healing that will linger after the applause ends.

John Prine and Dan Auerbach at the Altria Theater
Nov. 11

Cherished songwriter John Prine is a living country-folk legend — the guy who wrote a string of classics from “Sam Stone” and “Spanish Pipedream” to “Angel from Montgomery.” Here he’ll be joined by Black Keys’ frontman Dan Auerbach, who should really make sure he jots down notes. Even the stage banter from Prine is full of wisdom.

It’s been about a decade since Ohio art rock legends Pere Ubu performed in Richmond at the Byrd while delivering a memorable live score to the movie “X: the Man with X-Ray Eyes” during a James River Film Fest. The one-of-a-kind David Thomas, a singer who’s been described as sounding like James Stewart trapped in an oboe, is bringing a three-guitar, five-piece lineup of the band this time to perform in the intimate environs of Strange Matter on tour for its new album, “20 Years in a Montana Missile Silo,” due out Sept. 29 on Cherry Red Records.