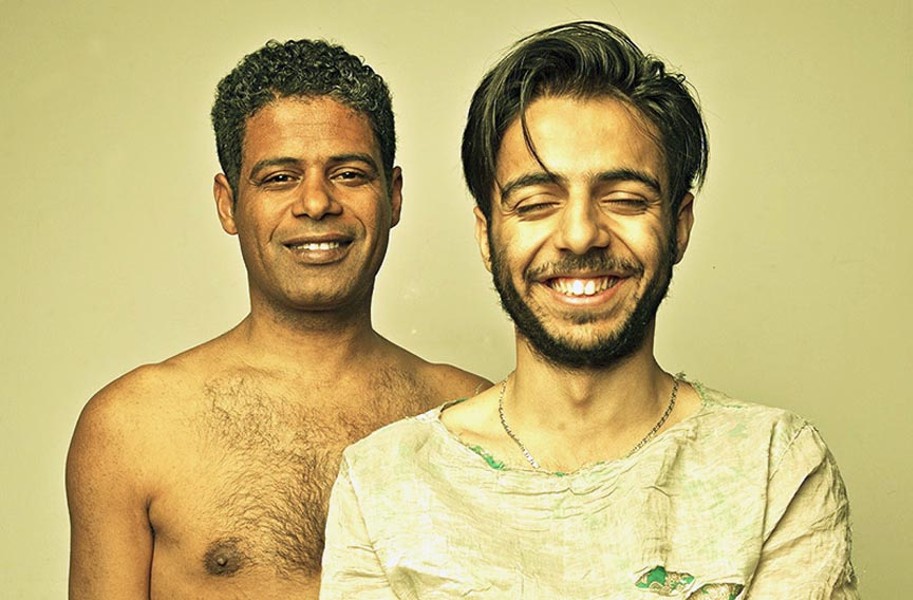 Five years ago, when Iranian Saeid Shanbehzadeh brought his bagpipe music to the Richmond Folk Festival, it was one of the most mesmerizing performances in festival history. Such was the passion and energy that enveloped the MWV tent, now the WestRock stage. It carried us all somewhere else. Somewhere, and I use this word sparingly, magical.

Any time Ensemble Shanbehzadeh performs in America is a rare treat to experience folk music from southwestern Iran. Its leader is one of the only Iranian folk musicians to ever play in this country, and it’s never easy for the ensemble to travel here even though its members now live in Paris. Last year they were scheduled to perform and had visa problems. They’re still Iranian, after all.

Shanbehzadeh, who will be accompanied by his 22-year-old son Naghib on percussion, plays a double-reed bagpipe called the neyanban — the one he used last time resembled a plush toy pig. His trancelike music is a melting pot of Sufi, Arab, Persian and Indian traditions, which the musician began learning as a child from the old masters in the port city of Bushehr.

Need more description? Imagine hypnotic reed music as fluid as jazz great Eric Dolphy in its creativity, underscored by lightning-fast hand percussion with peaks of ecstatic singing and chanted traditional lyrics. Also while playing, Shanbehzadeh is sensually dancing, tearing off his clothes and holding the neyanban close to his body like a bride.

Shanbehzadeh moved to Paris in 2002, fed up with the Iranian government and its lack of support for folk musicians.

“I am not waiting for relationship to be good between America and Iran. The Iranian government is criminal — they have to go,” Shanbehzadeh says by phone from New York. “They don’t like the reality. They are against the nature. I am a natural person, an artist. They make the problem when I want to share my culture.”

Shanbehzadeh says that he’s considering moving to Canada, where he recently played to 23,000 people in Toronto, and hopes to one day secure an American green card.

“We have difficulty traveling everywhere in the world and cannot play in our own country. But everywhere, people love it,” he says. “I would like to show my audience that music is music. … My mission is not finished yet. I have to play the music, defend the music, talk about the music.”

Robert Browning, who founded the World Music Institute in New York, was the first to bring him over. Beginning 25 years ago, he had trouble bringing Iranian musicians partly because he was dealing with a U.S. ambassador to Iran who was a former hostage, he says, laughing. He notes that the ensemble’s music isn’t as related to Persian, which is classical with strong rules, as it is to Kurdish.

“The people themselves going back centuries are mixed-race,” Browning says. “They’re seafaring people but the music relates more to this sort of desert music — they do go into a trance. They’re totally immersed.”

Browning says the officially sanctioned music is Iranian classical. “The government doesn’t support Sufism, which they see as worship of idols,” he says. “When I first went there, Western and Arab pop was outlawed but all the cab drivers had their cassette tapes.”

“I don’t write the songs, I do a lot of research. They are traditional. I wrote some of them, not too much,” Shanbehzadeh says. “In our music there is a style that is political. It depends on how we sing. It can be funny. Outside I am activist, but not onstage. The mic they give to me is for playing music, not doing political speech.”

By that final song in 2010, he’d worked the crowd of mostly older, well-groomed white folks into a howling frenzy, ready to follow this pied piper in a Bedouin caravan. (You can watch my cell phone video of the moment at Styleweekly.com.)

I play audio from that night to Shanbehzadeh for his impressions.

“This is an old song. In our language and our culture, when we are speaking about the sea, this means the place we live. Most of our life is in the sea, we are fishermen, we travel the sea,” he says. “This song is talking about the captain of one ship. We are sitting in one ship like a country. In our ship, the captain is not a good person and the seamen don’t have anything to eat. The captain is rich, selling the petrol. But the seamen’s children are wishing to have just one little chocolate. It’s their dream.”