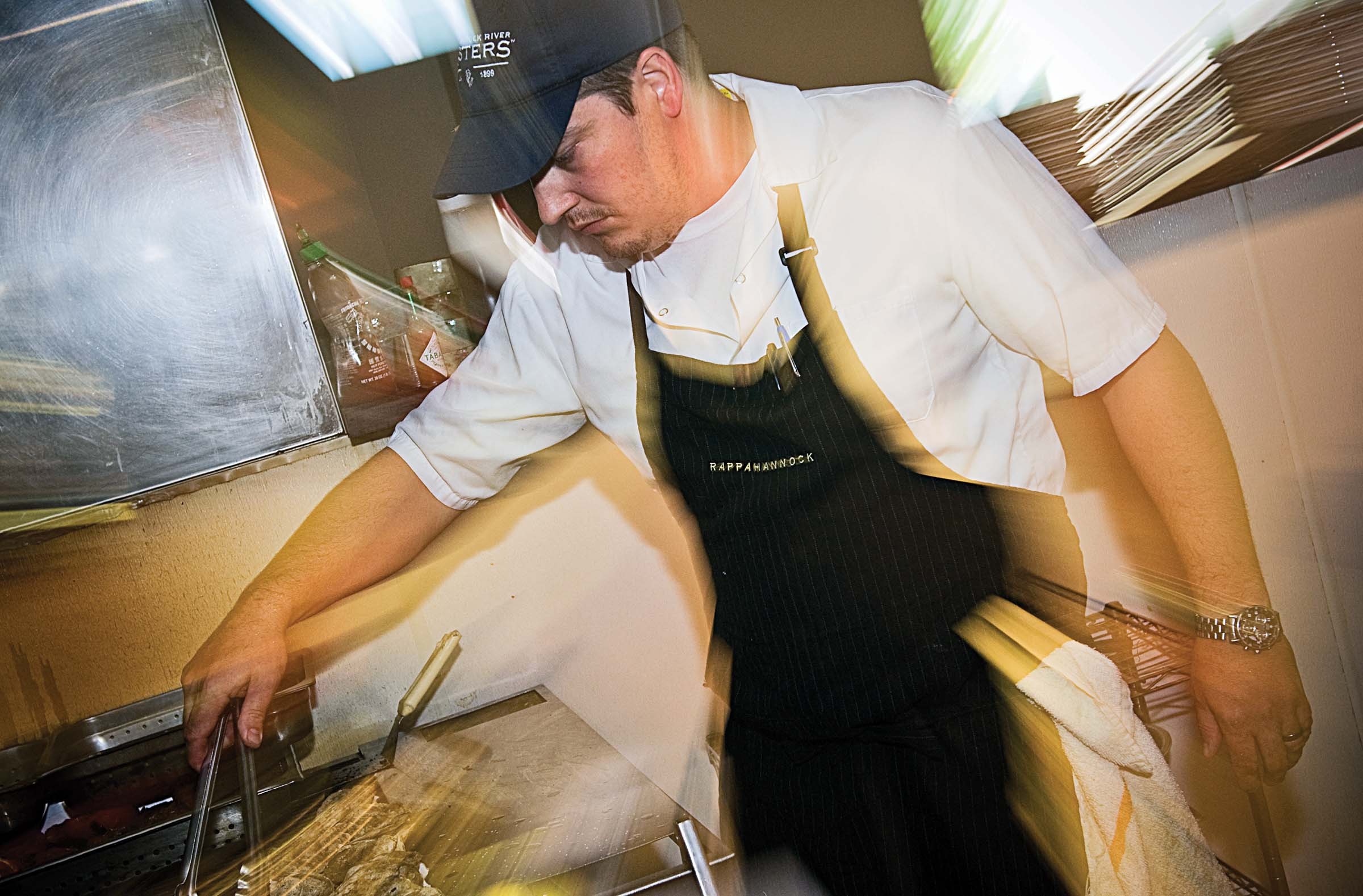 For years, Dylan Fultineer bought oysters from Travis and Ryan Croxton. "I met them in 2003 when they were early on, just getting launched," he says. "I always loved their product, loved what they do, bringing back the Chesapeake Bay oyster." He moved here 16 months ago from high-profile jobs at the Hungry Cat in California, and before that Blackbird in Chicago, to help the Croxton cousins open the Richmond link in their oyster empire in December. Working in the business since age 15, he went to culinary school in Pittsburgh and climbed the fine dining ladder, mentored by some of the country's best chefs. "There's an interest in food, and there's being good in the restaurant business, and those are two distinctly different things," he says. "I landed a job at a restaurant and I never turned back. Once I was in the kitchen I realized I had a knack for the actual business."

The ingredient defines the dish: I build from the ground up based on the product — that's how I gear my philosophy. I start with the product, find out what it has to offer, and I build to it. I lean heavily on bright flavors, vinegars, strong spices, somewhat on the Mediterranean side, and build from that.

How to cope with the restaurant's early popularity: It's kind of difficult, to be honest. You don't have any room for error. Being a chef is stressful enough, but knowing you're scrutinized from day one is tough to swallow — it makes it harder to be under that limelight. Coming into Richmond, there was a lot of pressure up front. We got scrutinized out of the gate, but that breeds competition and breeds everyone to be better.

The upside is the reward, knowing that people are very in tune to what we do. Being able to put some stuff out there that people aren't used to having, getting people to understand how well certain combinations work together, something new that wows them — that's the rewarding part of it, that's what I want to shoot for.

How Richmond chefs challenge each other to improve: There's definitely a great, tightly knit group of guys here. There's been open arms all the way around since we started this project. Jason Alley [of Comfort and Pasture restaurants] is a great friend of ours, helped us pick this location. Everybody really wants to see the Richmond food scene go forward. Competition is good, and having better restaurants come to the city is a good thing for everyone. I think it's going in a positive direction.

Staying away from negativity is a coping tactic: Because it annoys me, I don't read reviews, I don't read Yelp or Open Table unless someone sends them to me. At the end of the day, it's about what I do. I feel like people are looking for a reason to say something negative. A lot of times they completely don't understand, they just don't get it, but that's the world we live in. I personally stay away from it ... but if I need to deal with it, I do.

How the business gets harder with success: As a young cook, you're given this list to accomplish in a certain period of time. As you grow, you're taking on issues, other peoples' problems, inventory, ordering, phone calls, emails, and the list starts to grow to the point that you've got people coming at you from all angles. It's trying to focus on food, working on a dish, it's everything involved.

Usually at the end of the service, there is a moment where everything worked extremely well, the food looks gorgeous and people are happy — that's why I do what I do. I wouldn't beat myself up if I didn't enjoy it. I love great food and great product and at the end of the day that's what makes me happy.