As Richmond changes, four local museums are looking for new ways to tell the city’s story.

If Gen. Robert E. Lee dropped in on Richmond tomorrow, he'd find nary a pine needle out of place in a perfectly preserved battle campsite inside the Museum of the Confederacy.

But outside the bunkerlike building, much has changed. Down the hill in Shockoe Bottom — once home to the second-largest slave market in the country — Lee would find no recognizable evidence of the industry he fought to defend.

Until relatively recently, few people found it odd that Lee's campsite scene stood preserved while the foundations of that once-bustling market of atrocities was trampled by train tracks, parking lots and an interstate highway.

The ongoing outcry over the redevelopment of Shockoe Bottom — even with a proposed slavery heritage site — has made it clear that preservation and the full telling of the city's history will demand more than a token nod.

For the leaders of five of Richmond's major history museums, the Shockoe Bottom controversy reinforces the need to look beyond their walls and traditions to survive. To one degree or another, the Museum of the Confederacy, the American Civil War Center at Historic Tredegar, the Valentine Richmond History Center, the Black History Museum and Cultural Center of Virginia, and the Virginia Historical Society are remaking themselves. They're raising millions of dollars for major expansions and renovations. They're also talking a lot more about connecting with people and communities and less about making room for artifacts.

It's about making the past relevant, says Paul Levengood, chief executive of the Virginia Historical Society, which is nearly 200 years old.

"If we can all realize our job is not just to collect stuff and put it on a shelf," he says, "but to show why history matters and why it's a vital piece of being an informed and smart 21st-century person — we will have done something." 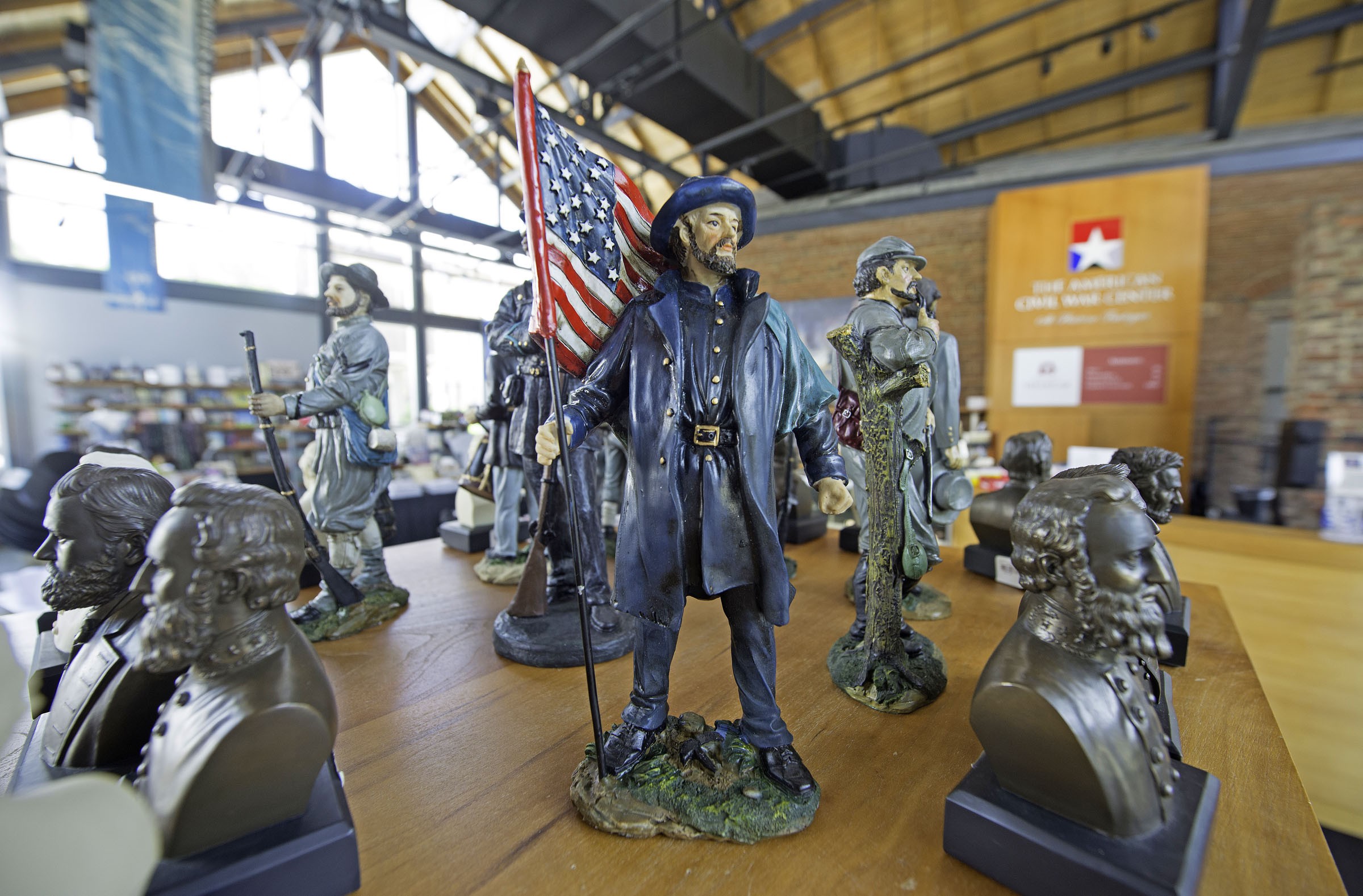 The merger reflects a new mission to tell a more complete story, says S. Waite Rawls III, who served as chief executive of the Museum of the Confederacy and shares those duties at the combined museum. He also sees the change as a cautionary tale to others — especially the Black History Museum, which he fears would struggle as a stand-alone institution alongside a possible slave heritage site and museum in Shockoe Bottom.

"If you had interviewed people two years ago about the [Museum of the Confederacy] and the Civil War Center, we would have pointed out to you all sorts of differences between the two that go over the head of a normal person," he says. "My feeling on African-American history is very similar."

Go to any of these institutions, especially on a weekday, and you're likely to have entire wings to yourself. Comparing attendance — paid, unpaid, student and tourist groups — is difficult but Richmond's institutions don't live or die on ticket sales. They have support from large corporations willing to spend millions of dollars selling Richmond as a culturally rich and changing city. Companies want potential employees from New York or San Francisco or Denver to know the former Capital of the Confederacy is taking a meaningful look at its past.

The tobacco giant Altria Group is one of them. A senior vice president, Charles Whittaker, serves on the board of the Valentine Richmond History Center. He says the company remains committed to supporting institutions that have a clear path forward. With its community-centered atmosphere, he says, the Valentine embodies key elements that other local institutions will have to follow if they expect to make it into the next century.

"We're going from storage place to meeting place," Whitaker says. "It's a place to have conversations about the challenges we have today." 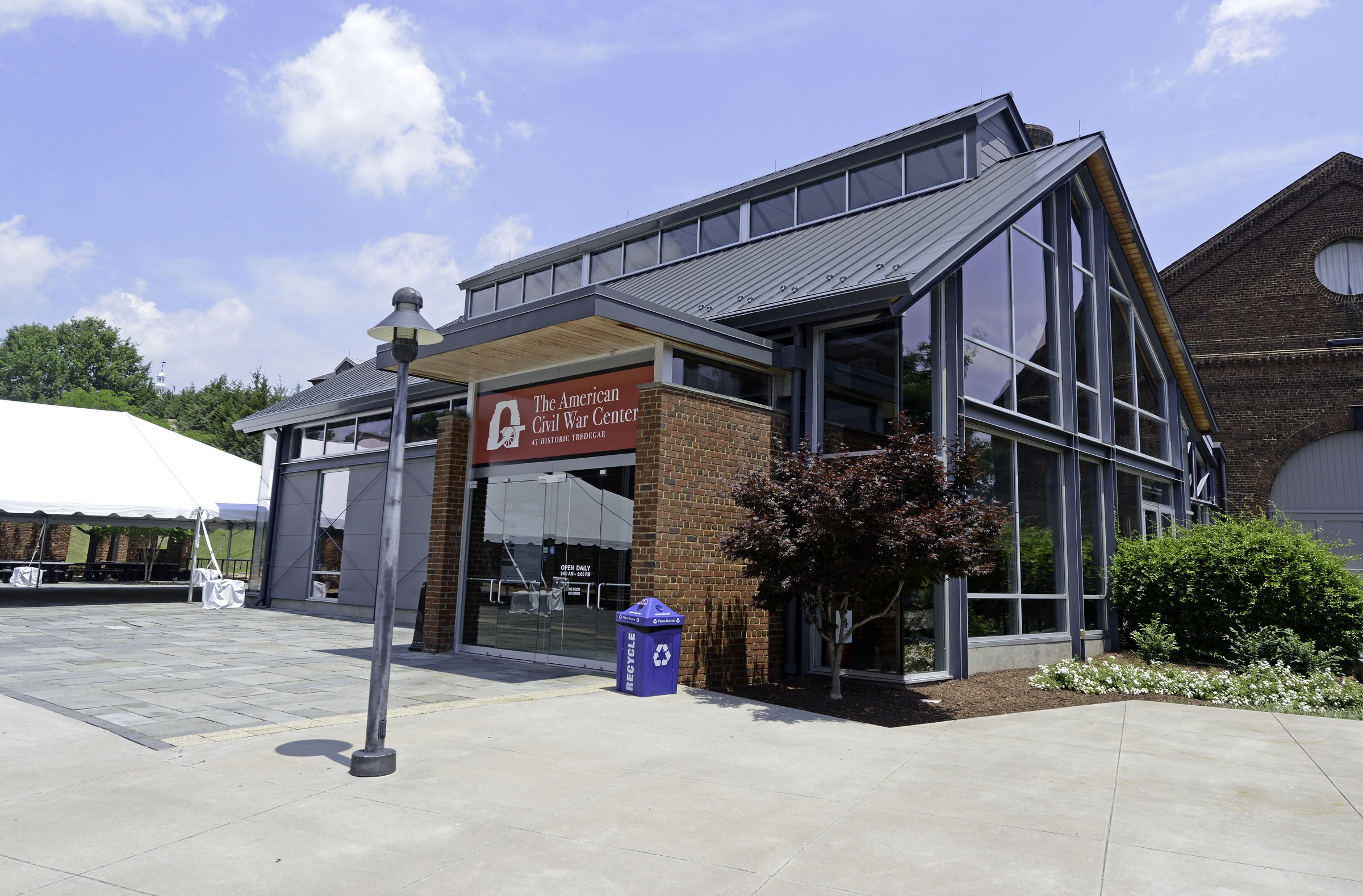 From his office window, S. Waite Rawls III has watched Virginia Commonwealth University's medical campus close in around the museum and the house that Jefferson Davis turned into his executive mansion. Speaking from behind a bushy mustache not unlike the one sported by Stonewall Jackson in the portrait next to him, Rawls says that after nearly 120 years it's time for Confederate history to join everyone else's.

In more progressive times, financial support for the museum has dwindled, but Rawls says that despite the museum's origins, which it traces to Confederate widows, it remained committed to telling the history of slavery.

"The story of antebellum African-Americans has been suppressed for 125 years," he says. "People didn't want to talk about it, whether it made them feel uncomfortable or they weren't interested. Richmonders are only beginning to understand what was going on in Shockoe Bottom in the 1850s."

To tell that story, the museum will work as a joint entity with the American Civil War Center at Historic Tredegar. The new American Civil War Museum, as the combined operation is now known, will include the Museum of the Confederacy's Appomattox location and a 45,000-square-foot addition at the Tredegar site near Brown's Island. While Jefferson Davis' White House will remain open, the main museum will close to the public after the new museum opens.

Rawls and new co-chief executive officer Christy Coleman, who served as head of the American Civil War Center, say the wealth of the Museum of the Confederacy's collection will benefit from a new interpretation.

"One of the things that these new exhibits are going to do is create real emotional space," Coleman says. "We want people to walk in and say, 'Oh my God, I can't believe what I just saw.' The familiar takes on a whole new meaning by the way it's displayed." 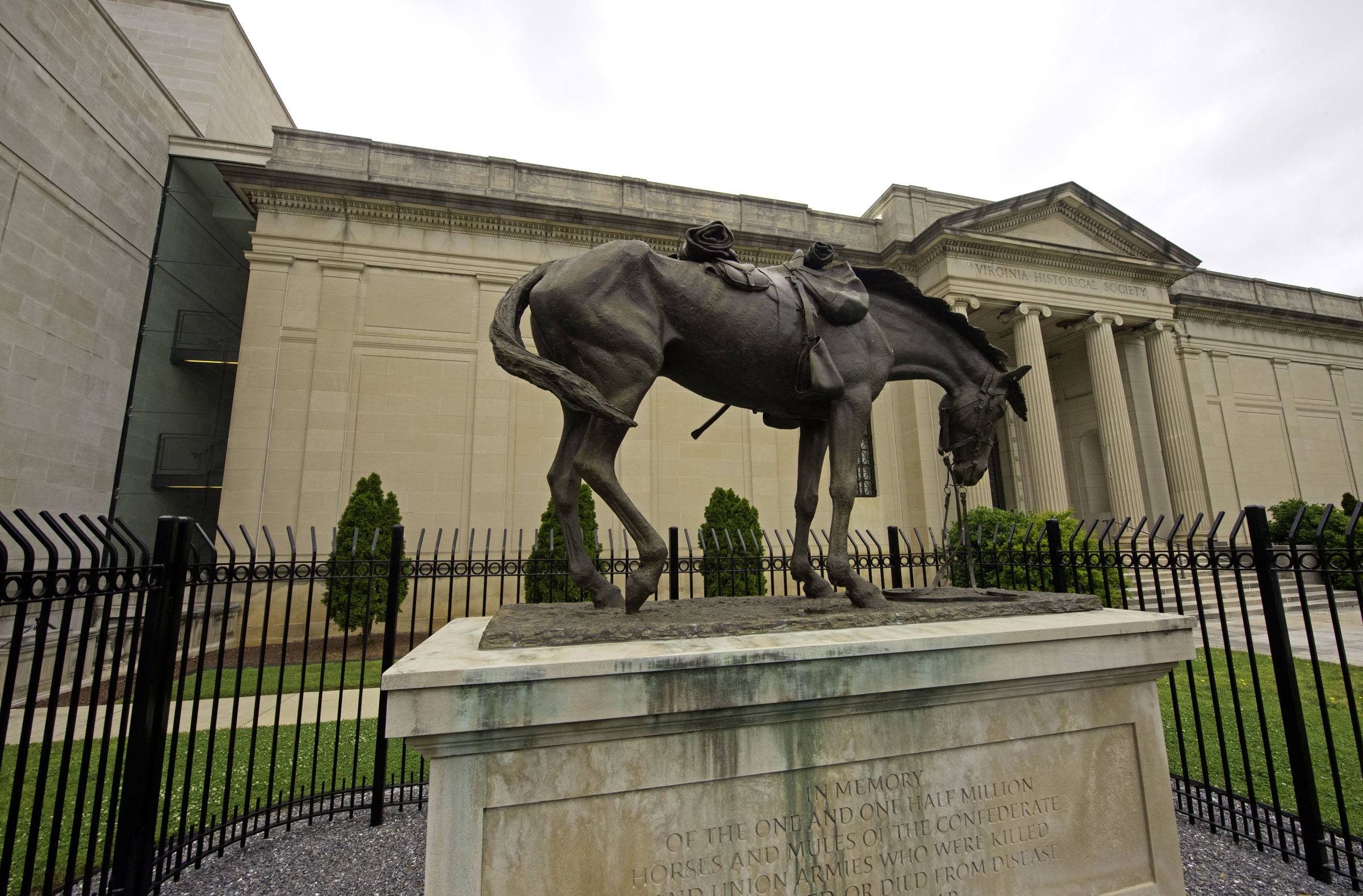 The Virginia Historical Society also has struggled with how to give that familiar meaning. With nearly nine million books, manuscripts and artifacts in the museum's collection, CEO Paul Levengood says simply expanding the institution's footprint didn't make sense. History is more popular than ever, he says, but that isn't going to mean more foot traffic.

"The people who come in and use the library or go to an exhibit, that's only the tip of the iceberg of people who will benefit from what we have," he says. "Rather than just make a big building bigger, we made a big building smarter."

Its fundraising campaign focuses as much on adding education space as it does honing in on how people are using the society's resources. Primarily, he says, visitors are looking for their own histories. A recently launched database titled Unknown No Longer documents slave names. A documentary that will play in its main theater will be mostly crowd-sourced stories of life in Virginia.

It's quite a turnaround for an institution that began life during slavery and lost its $5,000 endowment after investing in Confederate war bonds. Levengood says the goal is to help history become vital — and to show Virginians that places such as Shockoe Bottom tap into something more than just how to use space.

"We haven't done a perfect job yet of really harnessing the power of history to inform our lives, and put meaning and context in our lives," he says. "These are issues that touch on personal history, common history that make people feel that galvanizing thing.

"When it involves my ancestor, your ancestor," he says, "that gets right at the heart of people's psyche and their soul."

Founded: 1898
2013 revenue after expenses: $1,789,232
Assets in 2013: $16,925,623
Funding campaign: $8.6 million for renovations and endowment
Exhibition galleries reopening: October 2014
One thing you should see: The bottles of Valentine's Meat Juice on display in the Wickham House, which is open during renovations

Mann S. Valentine Jr. started collecting artifacts after making a fortune on a meat juice concoction he advertised as a health tonic. He eventually bought a Clay Street townhouse to store his finds. Valentine's hobby became a museum in 1898, expanding into a ubiquitous brand. Under the leadership of director Bill Martin, the Valentine discarded the term museum in 2000.

Martin casually dismantles the very idea of a museum as he wanders through the Valentine's storage area, which holds thousands of objects including silverware and a bank sign dating to the 2008 economic crash. A renovation project on its education center and exhibit space under a historic brownstone will hold about 400 of those items, more as conversation pieces than as a catalog. The focus remains elsewhere: The Valentine conducts more than 300 walking tours of the city every year, and serves as host of community forums connecting the past and future of places such as Monroe Park and Shockoe Bottom.

"What we're trying to create here is this place you want to just be," Martin says. "If you have a friend in town, you may not even come into the museum, but maybe you'll sit in the garden and have a Sally Bell's lunch. By doing that, you've learned probably more about what Richmond is than by putting you in a museum somewhere and giving you a talk."

Martin's plan is an acknowledgment of both a changing population and the limited scope of what was considered a museum in the 19th century. He sees the center's survival resting on millennials, who would rather experience a historic place than go to lectures about it.

Millennials are attracted to Richmond, he says. "It has a sense that this is a real place. A sense of real place is, in fact, history." 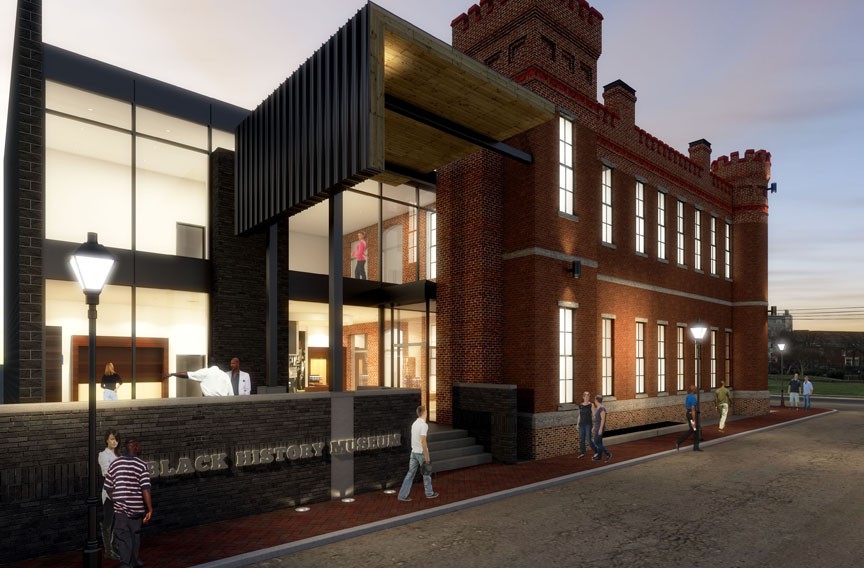 Founded: 1991
2013 revenue less expenses: $159,260
Assets in 2013: $1,013,093
Fundraising campaign: $8 million for construction and exhibitions; $3 million for a maintenance reserve; $2 million for operations over five years
Reopening: Fall 2015
One thing you should see: The unique use of the Leigh Street Armory's turrets as Kid Zones

The Black History Museum and Cultural Center of Virginia has offered sorely lacking context to Richmond's development as a city, chronicling African-American neighborhoods disrupted, demolished and largely ignored in history textbooks. As it looks to expand from one historic Jackson Ward location to another, chief executive Stacy Burrs says the mission will expand to cover Virginia more thoroughly.

The museum has struggled in the past, Burrs says, from a lack of visibility and vision. He says by moving into the Leigh Street Armory, among the only such buildings constructed for an all-black militia, the museum won't just have a new space, but a better ability to connect the legacy of slavery to issues facing Richmond today.

Burrs largely ducks questions about whether Richmond could support the Black History Museum, the heritage site proposed by Mayor Dwight Jones and, possibly, a national slavery museum proposed for Broad Street by former Gov. Doug Wilder. The museum will tie that slavery history into current issues, he says.

"Whether it's a 25-percent poverty rate or the prison industrial complex, all those things are the vestiges of the story everyone says they want to tell," Burrs says. "They say they want to tell the story right. Let's do that, but let's figure out how we can take that and raise everybody's consciousness and address some of these things that seem intractable."

The museum, which is working to become a Smithsonian affiliate of the African American History Museum in Washington will look to a younger generation to tackle those issues, he says.

"They aren't burdened by some of the things my generation is burdened by," Burrs says. "They're getting together despite whatever 'hood you might come from. That's going to be America at some point. It's not going to be a lot of black and white folks — it's going to be brown people.

"It's smart for us to get out in front of that and empower young folks to teach us, instead of us thinking we have all the answers." S