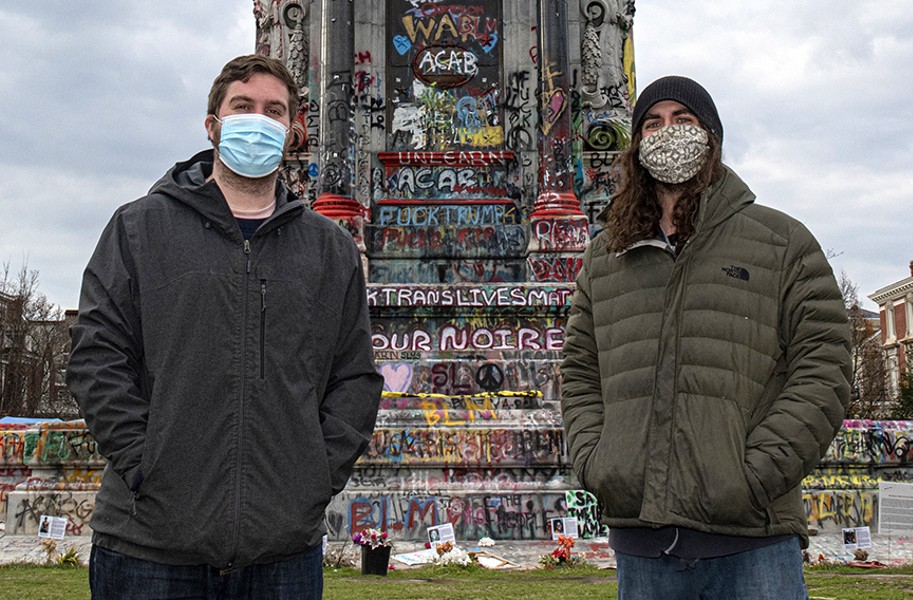 When it comes to memorable images from the United States in 2020, Richmond provided one at the top of many national observers’ lists. Several national magazines, including The New York Times Style Magazine, Artforum and just recently, National Geographic, have used our re-contextualized Lee statue as one of the most singularly powerful images of the year.

We all know it: The pedestal base is tagged with layers of colorful commentary by the community and covered by projections of George Floyd and other historic Black faces as well as BLM across the horse that Lee rides. Together they helped form a massive collage, turning what was once a shameful object of glorification into a symbolic and inspirational one for many Richmonders. Still, there were Richmonders who preferred the statues the way they were. This became one of the biggest flashpoints of contention of the year, which you could see in countless online comment threads, often turning ugly.

The local artist responsible for the projections is Dustin Klein, 33, a lighting and video designer raised in Chesterfield County who went to governor’s school in Petersburg. Klein is normally touring with the jam band Papadosio, but after the protests began, he and his partner, Alex Criqui, set up near the Lee statue for the first three months, six out of seven days every week, he says. Now that has been reduced to whenever there are special events.

“I’m really proud of how the people of Richmond have taken something hateful and turned it into something beautiful,” says Criqui.

Style Weekly: What was the most special moment out there for you?

Dustin Klein: I think the first night that we really went out, turned it on, there was a march where a hundred people came from a direction that was facing the projection. That was definitely a big moment.

Were there any times you felt threatened?

Yeah, there were definitely times when there was like 200-plus cops, more so than people, and lots of tear gas, and we were still projecting. Cops never actually told us to turn the projections off the whole time. One asked us how we chose our content. But we did our best to stay out of the way. To be projecting while cops are shooting tear gas and rubber bullets is definitely one of the most surreal, awful experiences – strange to see while you’re showing Harriet Tubman on the side of a monument. … We had masks and were far enough away. Alex got tear-gassed a couple times, but I luckily avoided it.

Did you hear much from the neighbors?

Yeah, we often were on private property to be safe. One older woman, I don’t want to say her name, was awesome and let us use her driveway for nights until her neighbors asked her to not do that. So we moved to a different part of the circle, which she owned, which wasn’t her house.

What was your response to The New York Times Style magazine article?

This has been more press than I’ve ever gotten in my life. It’s been a switch, but I’m glad it’s Richmond and an important cause. In some ways, I think they should shine more light on the activists and not me. … It’s funny. It’s such a beautiful sight to see, it’s a lot more beautiful to me now than it was before. Art’s not a competition. We just went out there to support people and support activism, that’s the main point in the end. It’s great that people find it as art, but I think the whole city has been working as a team to turn that monument into something that represents Richmond better than it did previously. I’m happy to be a part of that community art project.

How has your life changed since the projections started?

My life changed a lot when COVID hit. I had been on the road for the past 10 years doing concerts. It had been go, go, go for me, and COVID kept me in town and available to help with the protests. Since then, a lot of different opportunities opened up and different avenues to see where we can continue this kind of work. Some have worked out, others not. [They just did a video project at the Virginia Museum of Fine Arts to commemorate the “Rumors of War” statue last weekend]. We’re definitely looking to keep projecting for activism.

What would you like to see happen with the statues?

I agree they should be taken out of public spaces and put into museums if they are to be preserved. I’d like to see inclusive art that represents everyone … in terms of Lee in particular, the way it looks now, the context, it could be preserved. But I think they should take Lee off the top. We definitely would love to create a permanent projector installation if the city was interested in it, with the proper amount of funding.

As an artist, what did you learn from this entire experience?

I didn’t expect it to resonate as much as it did, but I think it shows the discussion about monuments is important: That we leave symbols that teach the next generations the right thing, inclusive things that are meaningful. The art we surround ourselves with has a lot to do with how we carry ourselves. And I didn’t really realize how important that was until after this.