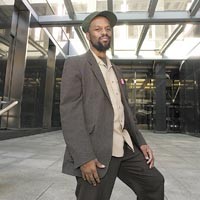 “When people think activist, they think you're out here ready to picket somebody,” says Duron Chavis, also known as Brother Manifest, who's been known to hold a sign now and then in support of the cause.

But it's not in a picket line that you're most likely to find Chavis. He's the face of a different kind of social consciousness in the black community, one devoted to positive messages, changed minds and what it means to be black in America.

“They say knowledge is power,” Chavis says, “but I say it's not powerful unless you do something with it.”

Chavis, an eligibility worker for Richmond's Department of Social Services, is founder and tireless promoter of Happily Natural Day, a yearly festival devoted to rebuilding the self-esteem of the black community. His work is about people knowing who they are, he says, loving who they are and raising their awareness: “If you really love yourself, you're going to do for yourself.”

Held each August for the past seven years, Happily Natural is more than one day. It's a year-round social movement, a mind-set and an educational resource built around Chavis' belief that pride in community and pride in self are the twin roads to success for the black community. He's brought that to local TV, a lecture series and other events.

Chavis' commitment to cause — and to education — has not always met with approval, and in one case while still a student at George Wythe High School, he took three bullets during a poetry reading. But he stuck to his belief that education is a powerful changing force in the black community. He recovered, graduated in the top of his class, attended Virginia State University on scholarship and launched his crusade to right nearly 400 years of wrongs.