Quentin Tarantino creates a version of WWII the Fuhrer might have appreciated. 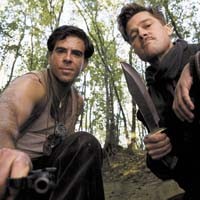 Quentin Tarantino's World War II has a lot of movie buffs. “Inglourious Basterds” likely contains the first instance, real or invented, in which a military man (Michael Fassbender) gets the nod for a top-secret mission by proving his cinema expertise.

While not the most unlikely element in the “Kill Bill” filmmaker's new effort, frequent brushes with cinephiles in war-torn Europe are at least in keeping with Tarantino's noted adoration of the medium and the complete historical reimagining the movie is going for, about two factions who want to blow up a movie theater in occupied France during a screening for the entire Nazi high command.

The first is the Basterds, a group of U.S.-supplied Jewish resistance fighters led by the jut-jawed Lt. Aldo Raine (Brad Pitt), who have been organized and sent into occupied territory to strike fear in the German military by ambushing it with extreme force and cruelty. The second is led by the theater owner, Shosanna (Melanie Laurent), who saw her entire family murdered at the hands of a notorious Jew hunter, Col. Landa (Christoph Waltz).

The movie progresses in five chapters that are only connected by the characters, whose paths will cross at the all-important ending. It's revealing to note the plot of that movie-within-the-movie these people (the ones still alive anyway) will attend. “Nation's Pride,” based on a true story in Tarantino's movie, is about a German war hero and sharpshooter (Daniel BrA¬hl) who saves a city by killing hundreds of the enemy single-handedly.

It's also important to remember that “Nation's Pride” was created by Tarantino. The similarities continue past the content — hundreds also will die at the hands of heroes at the end of “Inglourious Basterds” — to the adoration of larger-than-life violence and the way it's played to the audience.

That last part is the most important. Tarantino intends “Inglourious Basterds” as a revenge fantasy, and I couldn't help thinking how “Nation's Pride” is the same kind of fantasy. “Nation's Pride” thrills the German leadership — “Hun pigs” as Shosanna calls them — in the movie's movie audience, including Hitler and his director, Joseph Goebbels, who are repeatedly shown reveling in the thrill of heroic violence — just before we see the theater go up in flames and bullets.

Do we need a better testament to dial back this kind of stuff? It's at least a little disturbing that Tarantino doesn't seem to make the connection.

While there's nothing new with using the Nazis as easily-recognizable villains in juvenile media — see comic books, “Indiana Jones” movies and video games — there's something grotesque about the way “Inglourious Basterds” uses the Third Reich for unbridled entertainment, and the way Tarantino's undeniable talent for mixing horror and humor intends to have it both ways. He wants to make another hip, comic-book-and-trashy-matinee-inspired movie while pretending to say something compelling. The two forces end up creating problems for each other.

In one lengthy chapter, three resistance fighters meeting as German officers in a French bar are unmasked by a real Nazi, and a shootout ensues, killing almost everyone. Tarantino elaborately stages the sequence, choking it with tension and suspense that transpires in the usual ornate dialogue before the scene explodes like fireworks. It's an impressive bit of staging. You might want to see the split-second conclusion again to get it straight in your head, but then you might be even more likely to ponder rude questions like, why the Allied guys didn't meet somewhere private, or why the Nazi officer didn't nonchalantly find the nearest patrol unit to make an arrest.

The overriding principle of “Inglourious Basterds” is why do the logical thing when you can do the really, really cool thing? Why simply march into the farmhouse and demand the hidden Jews when you can drink milk for 30 minutes, change languages a couple of times and waste bullets shooting up the floorboards? Why hold a high-ranking enemy officer for interrogation when you can club him to death? Why take out the two — two — men guarding Hitler and Goebbels when you can blow up the entire building?

While not a new sentiment for a Tarantino film, it's beginning to feel more and more empty, despite the moments when, admittedly, you can't help but appreciate the wacky cleverness on display. But I hear Goebbels told a good story now and then, too. (R) 152 min. HHIII S