Drunk History: A New Library of Virginia Exhibit Explores the Culture of Prohibition 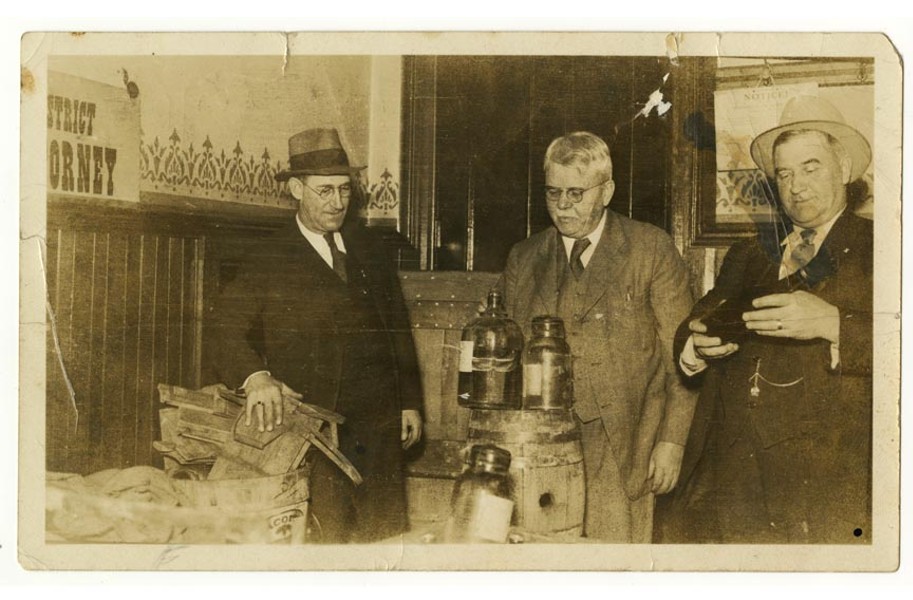 Long before there were red and blue states, there were wet and dry states.

As far back as colonial days, Americans drank vast quantities of alcohol. By the 19th century, saloons were considered male bastions central to neighborhoods, while reformers saw wages going to liquor as food taken out of the mouths of hungry babies.

On Halloween night in 1916 — more than three years before national Prohibition was enacted — Virginians sucked back their last legal drink.

The commonwealth’s love-hate relationship with booze is cleverly chronicled in the Library of Virginia’s new exhibit, “Teetotalers & Moonshiners: Prohibition in Virginia, Distilled.” Moonshining (making illegal alcohol) and bootlegging (transporting it) are given their due, along with the accouterments, music and sports that grew out of the booze biz.

The exhibit uses the immediacy of visual and sound elements. Large-scale projections of black-and-white newsreels show stills being busted. Voices of everyday people deal with an illicit underground world. Iconic objects including a real bottle of hooch from a 2005 bust — remain sealed as evidence. Visitors also have the opportunity to cast a reproduction ballot for or against statewide prohibition.

Virginia approved Prohibition with 71 of 100 counties and 16 of 20 cities voting in favor of it. Satisfyingly for a city now known for its beer and cocktail scenes, Richmond — along with Alexandria, Norfolk and Williamsburg — had wet majorities.

There’s also a video map showing the locations of stills, arrest records documenting those charged with drunk in public and a case displaying a silver flask and a Jerry cane, both meant to hold hootch. One of the most popular legacies of Prohibition was NASCAR, because early stars like Jimmy Johnson and Wendell Scott acquired mad driving skills while outrunning Prohibition agents in the Appalachian Mountains.

The library’s director of public services and outreach, Gregg Kimball — who’s also a musician — curated the show with an eye for displaying the Prohibition-related music angle. Popular songs tracked the mood of the country in genres as varied as gospel, Tin Pan Alley and old-timey folk. The exhibit draws on sheet music, period recordings and anti-liquor songbooks, with the debates over temperance and Prohibition playing out through song. A touch-screen station allows visitors to see and hear lyrics for and against the demon drink.

A reception and music program, Goodbye, Booze: the Music of Prohibition (with a Beer Chaser) on May 5 offers a chance for visitors to see the exhibit, hear live music, and try Last Call Imperial Brown Ale, created by the library in collaboration with Three Notch’d Brewing for the exhibition.

After curating for 30 years, Kimball knows better than to think that any two visitors will walk away from the exhibit with the same message. But he says his hope is that it’ll at least make them think.

“There’s an outlaw aspect that’s at the heart of American culture,” he says. “We love moonshiners and bootleggers.”

The exhibition also pokes fun at the absurdities of the bureaucratic state, such as a Norfolk rabbi busted for sacramental wine. “But the serious policy issue at the heart of the show is reflected in the current debate about the drug war and pot legalization,” Kimball says. “People got killed and incarcerated because of these policies.”

Kimball’s delight in creating the exhibit is obvious.

“It was about finding crazy objects like the last bottle of liquor sold in Roanoke on the eve of Prohibition or reading hundreds of newspaper articles that take you inside a past world,” he says of working with a creative team that helped him focus his ideas and find cool stuff in the collections.

“We said “Can you believe this?” a lot as we searched,” he recalls. “And visiting museum colleagues in Franklin County is always stimulating, if you know what I mean.” S

“Teetotalers & Moonshiners: Prohibition in Virginia, Distilled” is on display through Dec. 5 at the Library of Virginia, 800 E. Broad St. Goodbye Booze: the Music of Prohibition (with a Beer Chaser) will be held May 5 from 5:30-7:30 p.m. “Liquor Lore: Enforcement Stories from the ABC” takes place June 7 at noon. lva.virginia.gov.