Richmond's only all-girl DJ collective rocks you one used-bin find at a time. 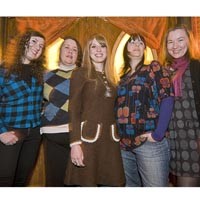 It's a frigid Monday night and the ladies of Cherry Bomb have assembled at Tracy Wilson's Fan apartment for a weekly meeting. Over sinful chocolate cake and a splash of whiskey, the members of Richmond's all-femme disc-jockey group loops Style Weekly into their world of wax before tackling an ever-growing agenda.

“Anybody can DJ,” founder Wilson says, but there's a big difference between knowing the mechanics of turntables and being a solid DJ. “It's about having the skill to pick the right songs, put them in the right order and read the room,” she says. “Even if people don't know what you're playing, you want to build a trust.”

Locals know a Cherry Bomb gig is a sure thing. A recent near-blizzard didn't keep the girls or a mass of fans from packing their regular Cous Cous gig. “It's one of the most amazing things that's happened,” Wilson says. “We got a following really fast. Everyone knows that no matter what gets played that night, it's gonna be a good time.”

It's difficult to believe that this all just kicked up in the last year. Wilson, a seasoned spinner of nine years, was working on and off at such spots as Ipanema and couldn't help but notice she was rarely in the company of women doing the same. “It seemed like an incredible boys club,” Wilson says. “It's not that I needed another girl to DJ with, but it I thought it would just be nice to have a few other ladies to potentially reach out to and have around. It just seemed like such a male-dominated hobby and point of interest.”

Wilson's next move was a Facebook posting that invited interested women to her house to get schooled in spinning tunes. That brought together the Cherry Bomb lineup. A short time later, the group played a friend's birthday party and the concept exploded. “We all had such a good time that we said we should do it again,” Wilson says. “I don't think we've looked back.”

Each of the women has a distinctive musical personality that shows off savvy chops during individual sets. On any given night, you might hear such wide-ranging music as '60s mod-garage rock, obscure soul, riot-grrrl punk and the downright bizarro.

“I have a cover of Destiny's Child's ‘Say My Name' by Spare Snare that I got in the Virgin Megastore in Glasgow,” Vilkas D'Angelo-Horvath says. “It's kind of an acoustic, Celtic-influenced version.”

“And I love Neil Diamond,” Sarah Pratt says. “I only have six or seven of his records now, but I get really excited when I see them in the used bin.”

“You've been outed,” Wilson says, laughing. “This is the first time she's admitted this.”

While there's some challenge to transition Minor Threat smoothly into a toy-piano cover of a Strokes song, the girls make it work. D'Angelo-Horvath notes the value of a diverse set list. “If you don't like it,” she says, “wait another 20 minutes and it'll change.”

The experience has turned a group of women who might have just given each other a nod at the supermarket a totally supportive unit, too.

“It's changed my ears,” Sara Gossett says. “You learn a lot from watching each other, what works, what doesn't go well together. You learn in six months what would probably take you two years otherwise.”

The same can be said for their followers. “By and large, there's a lot of respect and dudes are stoked to see girls DJing and being girl-positive, but not exclusive at all,” Talia Miller says. Wilson adds: “I've actually had guys approach me and ask if I can teach them how to DJ. Even though we're a girl collective, I don't feel like we've made men feel unwelcome.”

The Cherry Bomb girls know they have their own niche. “We're definitely not tapped into that DJ world, primarily because we deal in vinyl and don't each play five or six hours a night,” Wilson says. “It's not so much the club DJ as it is the music nerd, which is an entirely different animal.”

D'Angelo-Horvath chimes in to break it down: “Yeah, it's like a stick shift and an automatic. If you put one of us in Tiki Bobs, police might be involved. It'd be wacky.” S