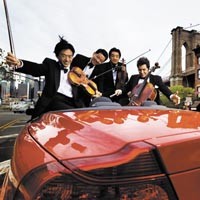 With apologies to “Sesame Street,” classical music in Richmond this winter and spring is brought to you by the numbers 18 and 20, with special appearances by 21 — the centuries that go by those numbers, that is.

From the 18th century, listen for Bach's “St. Matthew Passion,” performed by the Richmond Symphony and Symphony Chorus in one of the farewell programs of outgoing music director Mark Russell Smith (April 17, 18 and 20 at Second Baptist, First Baptist and St. Michael's Catholic churches); major works of Haydn and Mozart in the two remaining programs of the symphony's Haydn Festival (Feb. 6 and May 8 at Bon Air Baptist Church, Feb. 8 and May 10 at Randolph-Macon College); a concert by the men's vocal ensemble Chanticleer (March 29 at the University of Richmond's Modlin Center); and samplers of German, Italian and French baroque music, plus Haydn, Mozart and the young Beethoven, by cellist James Wilson and friends in the Richmond Festival of Music (April 18-24 at Magnolia Grange and First Unitarian Universalist and Bon Air Presbyterian churches).

Pivotal music of the 20th century, especially its early and late years, gets more than its usual share of ear time: Puccini's “Tosca,” staged by the Virginia Opera (Feb. 20 and 22 at the Landmark Theater); the First Symphony of Shostakovich, played by the symphony (Feb. 20, 21 and 23 at the three churches); a symphony program featuring Ives' “The Unanswered Question” and “Les Illuminations” — Britten's settings of poems by Rimbaud — sung by tenor Robert Breault (March 6, 7 and 9 at the three churches); Richmond pianists and spouses Joanne Kong and Paul Hanson with members of eighth blackbird in a salute to two of the century's most influential composers, Olivier Messiaen and Elliott Carter (Feb. 23 at UR); and, in Smith's symphony finale, Mahler's epic Ninth Symphony (May 15, 16 and 18 at the three churches).

Four contrasting samples of 21st-century music come from the Shanghai Quartet, in one of the first performances of the String Quartet No. 3 by the Polish modern master Krzysztof Penderecki (Feb. 22 at UR); eighth blackbird in a concert with Wilco drummer Glenn Kotche (March 25 at UR); the Imani Winds, a group that personifies the multicultural face of contemporary classical music (April 4 at Virginia Commonwealth University's Singleton Center); and the symphony in “Video Games Live,” a program spotlighting music written to accompany electronic games, perhaps the hottest new venue for contemporary composers (April 25 at the Landmark Theater).

The 19th-century, once the alpha and omega of classical programming, isn't entirely off the charts, though. It's represented in Rimsky-Korsakov's “Scheherazade,” played by the symphony (March 6, 7 and 9 at the three churches); Rossini's “The Barber of Seville,” staged by the Virginia Opera (March 27 and 29 at the Landmark Theater); and in programs by sibling pianists the 5 Browns (Feb. 7 at UR); mezzo-soprano Jennifer Larmore (Feb. 16 at UR); the trio of pianist Joseph Kalichstein, violinist Jaime Laredo and cellist Sharon Robinson (Feb. 28 at VCU); and pianist Peter Serkin (March 30 at UR). S