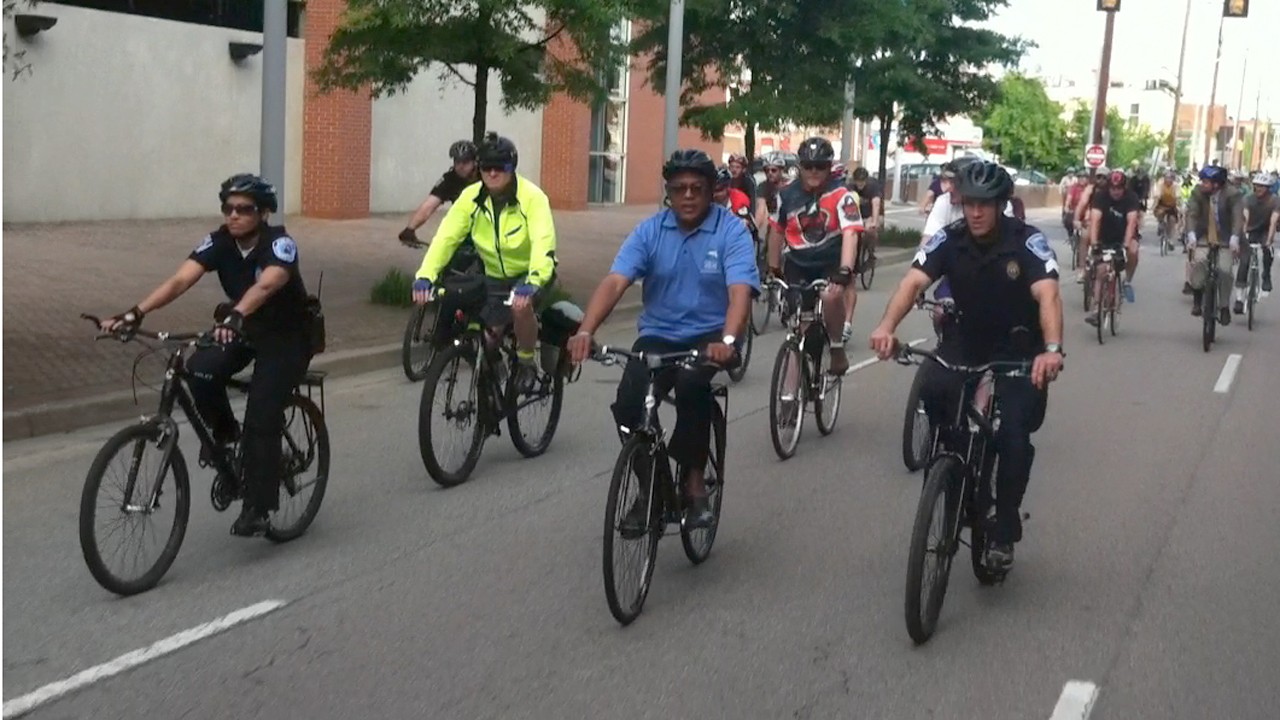 Richmond Mayor Dwight Jones is eating lunch at M Bistro and Wine Bar for the third day in a row. And like the days before, the black, tinted SUV that his full-time security detail uses to drive him across the city is idling in front of the restaurant in a fire lane.

When Jones exits the restaurant with his dining companion on this sunny day in August, the police officer reading in the vehicle hops out and opens the passenger door for the mayor’s guest before taking off.

Jones’ three-person, two-car security detail has been a recurring topic of discussion -- usually around City Council’s budget season -- since he took office in 2009. While council members were finalizing the fiscal year’s budget in May, the $400,000 expense narrowly avoided being reduced by 25 percent.

The cut was averted after Byron Marshall, the city’s chief administrative officer, proposed shifting $100,000 from a reserve fund used to pay temporary staffers at the city’s 3-1-1 call center.

As City Council begins preparing for the next budget, it’s uncertain what role the detail will play in the debate. Some council members have made it clear that if Jones wants to keep a security team, the police department must do more to justify the expense.

“Does he need to take [the security detail] while he’s in a restaurant or in a bar eating and drinking, whatever, or smoking cigars or whatever,” City Councilwoman Reva Trammell asked earlier this summer. “Does he need those officers out there in a police car? That’s what people are asking me.”

When asked about the detail, Jones has referred questions to the police chief that he appointed in February, Ray Tarasovic. The chief says the security is important and will continue.

The mission of the executive protection unit, which was established in 2005, is to “provide security and protection services to the mayor of the City of Richmond … and to protect against any harm or danger to the mayor in the facilitation of duties, travel and daily movement,” according to the unit’s manual.

That means Jones is rarely without an officer nearby when he’s in public. In May, when Jones led about 100 bicyclists on a morning ride to City Hall to mark National Bike to Work Day, two officers on bicycles flanked him. The SUV trailed close behind.

The unit also accompanies Jones on trips outside of Richmond. When the mayor attended President Barack Obama’s second inauguration in Washington, D.C., three officers accompanied him, according to receipts and documentation obtained by Style through a Freedom of Information Act request.

The trip cost city taxpayers $13,000 in travel expenses and overtime, the records show. Jones’ travel receipts show that he personally paid for his lodging, but the three officers who traveled with him billed the police department for three nights and three rooms at the Embassy Suites, and accrued $5,000 in overtime hours. A second trip this year to Meeting Place, Pa., accrued $1,000 in travel expenses billed to the city.

The police department released the documents only after Style Weekly filed suit in Richmond Circuit Court after the department had failed to provide records requested within the time period required by Virginia’s Freedom of Information Act. Style sought documents of travel, meals and other expenses, as well as records relating to the maintenance of the two vehicles typically used by the detail. Shortly after the department was formally served with the lawsuit, the department complied with Style’s request and agreed to pay Style’s attorney fees.

Altogether, the city is set to pay at total of $288,000 in salaries and benefits to the lieutenant and two detectives attached to the detail. The amount will go up when the 2-percent raise City Council approved for city employees goes into effect. As of Oct. 11, the unit racked up an additional $60,000 in overtime, according to documents provided by the police department.

Style also asked for reports made to the police department of any security threats to the mayor and daily activity logs filed by the security detail from May 1 to June 11. The department’s lawyer, Victoria Benjamin, says reported threats are exempt from the Freedom of Information Act and that the daily activity logs don’t exist.

Within the police department, some officers question the necessity of the detail as it’s structured. In the department, it’s unusual for a lieutenant to supervise only two employees, as is the case with the security detail, they say.

“In patrol, a lieutenant would oversee 20 people,” says one officer, speaking on the condition of anonymity. “When you work for a locality and they say there’s no money in the budget and you haven’t had a raise in five years, and you finally get a raise, but they can frivolously spend money on some things -- it kind of makes you wonder.”

The officer says it’s demoralizing to see one unit funded so well when many other officers drive around in cars with faded decals and badly peeling paint. He said most officers are lucky if they can get authorized to take their patrol cars through a car wash once a month. By contrast, the two vehicles assigned to the mayor’s detail spent $450 on car washes in the first half of this year, according to an accounting of receipts provided by the department.

The officer says some security is justifiable, but notes that not a single armed guard protects City Hall. Instead, unarmed security guards sit in a booth that faces one of the building’s four street-facing entrances.

Last month, a man was charged with trespassing for refusing to leave Jones’ office. Jones wasn’t there at the time, meaning the detail wasn’t nearby and office workers had to call police and wait for them to respond. The man carried an ax, among other tools, into the building, but left the bag at the downstairs security booth before he entered the mayor’s second-floor office.

To Fifth District City Councilman Parker Agelasto, the question of the mayor’s detail bears re-addressing in the context of security at City Hall as a whole. He says he’s been threatened while he was working in the building and had no one to immediately turn to. Other councilmen say they’ve also been subjected to threats.

“City Hall is very much a symbolic location,” Agelasto says, “and if you get trapped somewhere with someone, it can be a very unfortunate incident.”

Agelasto says he hasn’t seen any official reports of threats to the mayor, and without that information, it’s difficult to know how much security is really necessary.

City Council members say they may need to know more than that if they’re going to continue funding the detail at its current level. “I think it basically comes down to, if this is the recommendation, council needs to be given more knowledge as to why that recommendation exists,” Agelasto says.

Councilman Jon Baliles, who represents the First District, agrees. “If there’s any area in the government where we can save money, then we need to look at it,” he says.

Baliles says he doesn’t plan to single the issue out, but that Council plans to ask the Jones administration for an early look at budget information on a range of issues from grass mowing to other public services about which the public has expressed concerns. Baliles says that may include questions about the security detail.

But it’s a thorny political issue, and not everyone on council has the appetite to take up the debate again. Third District Councilman Chris Hilbert says the detail has come up as an issue every year in the 10 years he’s sat on City Council.

He says he doesn’t doubt the mayor needs some level of security. And he says he has no problem with the city paying for the mayor to have a driver. “I think it’s important for the mayor to be on time and not be circling a parking lot to get to an event,” he says.

But he thinks the debate over exactly how much security the mayor requires is a campaign issue for the next election. After all, when Jones took office, he decided to halve the amount the city was spending on security for then-mayor and former-governor Doug Wilder, who was protected by an eight person detail.