Frosty, refreshing and undeniably beautiful, these are some of our favorite frosés.

Scott Elmquist The frosé at the Graduate Richmond blends rosé with strawberries for a fruity, summery cocktail.

Frosé, or frozen rosé, has become a phenomenon permeating trendy cocktail menus for the better part of the last three summers.

While I first saw it sipped by a motley crew in Charleston on the Bravo network reality show "Southern Charm," Bar Primi, an Italian restaurant and wine bar in New York's NoHo neighborhood, is largely credited with inventing the beverage. It installed a machine behind the bar in 2016 to swirl frozen wine with vermouth and berry puree for overheated city dwellers. Rick Martinez, then senior food editor at Bon Appétit, further popularized the drink by publishing his take, which freezes wine in a sheet pan and then blends the icy granita with a homemade berry syrup and lemon juice. Other bars and mixologists have employed vodka to give it a kick. The drink has since been adopted as the delightful alternative to the frozen drinks of a Caribbean resort.

And now, I see Richmond beginning to catch the frosé feels. 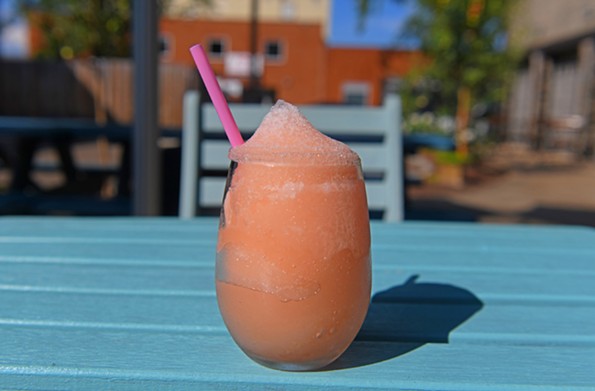 Blue Bee Cider, the housed in an historic stone building in Scott›s Addition, approaches the beverage by simply freezing its popular Mill Race Bramble cider, which is infused with raspberries and blackberries. The result is a refreshing slushie that has the blush pink look and an alcohol content teetering close to a full pour of rosé wine. It's perfect for patio sipping ($7).

The Graduate Hotel's Byrd House offers a version that's a deeper magenta, thanks to a healthy serving of strawberries ($9). It's lovely, but it feels only mildly boozy. Served in a Mason jar and overlooking downtown, it's ideal for a photo opportunity, though.

Kreggers at Hand offers two varieties, also at $9 a pop: peach and blackberry. Served as a tamer option, a waitress recently dissuaded me from ordering what apparently contains only half a glass of wine.

At Beauvine Burger Concept, it's just right: The frosé machine is a fixture year-round, folks! This iteration combines Pomelo Rosé, vodka and strawberry puree, finished off with bright agave sweetness. It's served in a wine glass and priced at $7. This is how it's done. 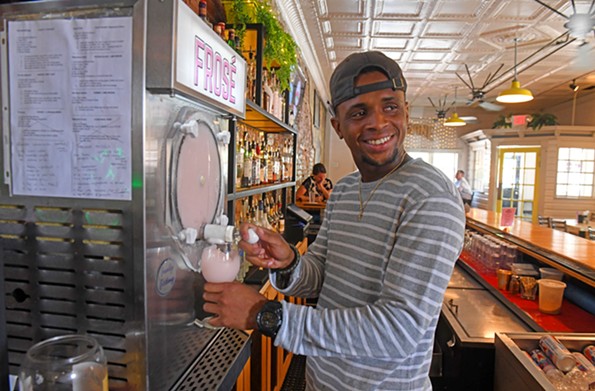 A shoutout goes to other spots with rotational frozen cocktails, which may or may not involve wine: Little Nickel, Saison, Laura Lee's and Q Rooftop Bar at Quirk Hotel, which featured a watermelon cucumber mojito over July Fourth weekend ($10).