Finding solidarity can mean different ways of seeing and being seen. 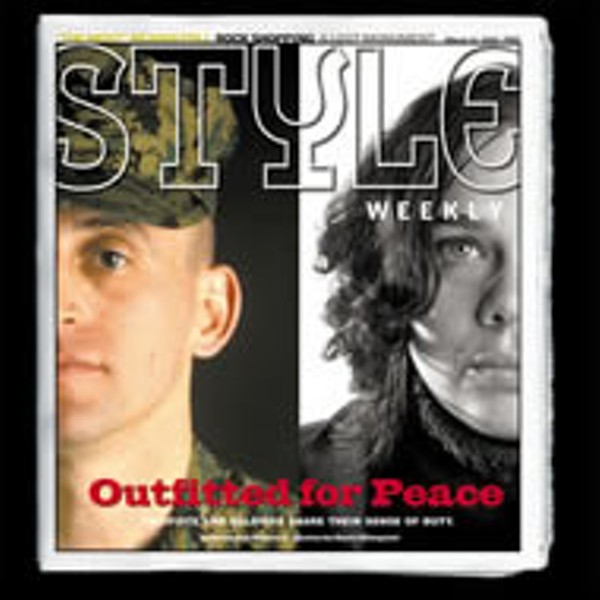 Last week, Style met with 10 men and women who represent the polarity in thought and emotion that has mounted over an impending war with Iraq. We followed the Richmond coalition of Women in Black, an international peace network known for its silent vigils that aim to bring awareness and action to human-rights violations around the world. And we went to the U.S. Army post at Fort Lee in Colonial Heights, the Langley Air Force Base in Hampton and the United States Marine Corps Reserve Center in Chesterfield County to meet men and women of the armed forces who serve in myriad roles. In this context we observed how pacifists and soldiers prepare themselves and mobilize, especially when war seems imminent.

These groups stand worlds apart on the use of military force. But they are, in some ways, similar.

By the way they dress, with the uniforms they wear, these men and women symbolize and personify most visibly what many of us struggle to put into words. The Women in Black, like mourners, clothe themselves in black as a sign of the sorrow and loss war exacts on humanity. The active-duty members of the United States armed forces put on their uniforms as testament to the inherent yet hard-won American freedoms they're bound to protect. They have been deployed to far reaches of the globe to test their strength and skills. Both groups stand for sons and daughters, husbands and wives, mothers and fathers who believe that their individual commitment contributes to a nobler collective cause. Their voices resonate and their faces move us. They seem harrowing, and yet comfortingly familiar.

There is a reason we identify with them. As a culture, we don't acquiesce to fear or fettered freedoms. We fight when threatened. Even so, as a nation, we see the means to do so through a prism of possibilities. We are conditioned to believe that options abound. But in the case of a war with Iraq, our leaders are insisting that diplomatic options are running out.

In all probability, by now, nearly 300,000 troops have been deployed to prepare for and respond to battle in the Middle East. Last week, Secretary of State Colin Powell voiced what we long have suspected. "With a force like this," he said, "we can't just be sitting around."

Meanwhile, polls show that a majority of Americans generally support taking action to disarm Iraq. But they are divided over the details — when, for example, and with how much U.N. and foreign support. And around the world, from the Vatican to the White House, peace rallies persist.

Yet as it becomes strikingly clear that a war is inevitable, the presumption that this could be a conflict like none other stirs a strange and enduring undercurrent at home. For any war now, surely, would be fought on two fronts — far away in the Middle East and on our soil. The impossible question of what will happen next and, consequently, in its wake, never has been more exigent or more visible.

So we turn these pages over to the men and women who remind us that it's important to take a stand. That pacifism and patriotism can be threads of the same fabric. That dialogue and duty matter. That perseverance prevails.

After all, if and when a war erupts, the Women in Black will continue to proceed, like an undulating black ribbon, single-filed and silent, with their Saturday afternoon demonstrations along the Boulevard. Since December their numbers have swelled from 30 to nearly 150. They will get more honks and waves from supporters and more invectives, too. Conversely, in the event of war, the men and women in the military will obey their orders, respond with vigor and possibly risk their lives for their country. Legions will do so from the front lines and in battle-ready fatigues. Still, there are those who will rebuke the cause.

Whatever the case for war may become, one thing is clear: The prism that once seemed glinting with possibilities for peace will seize our attention in fierce and unpredictable ways.