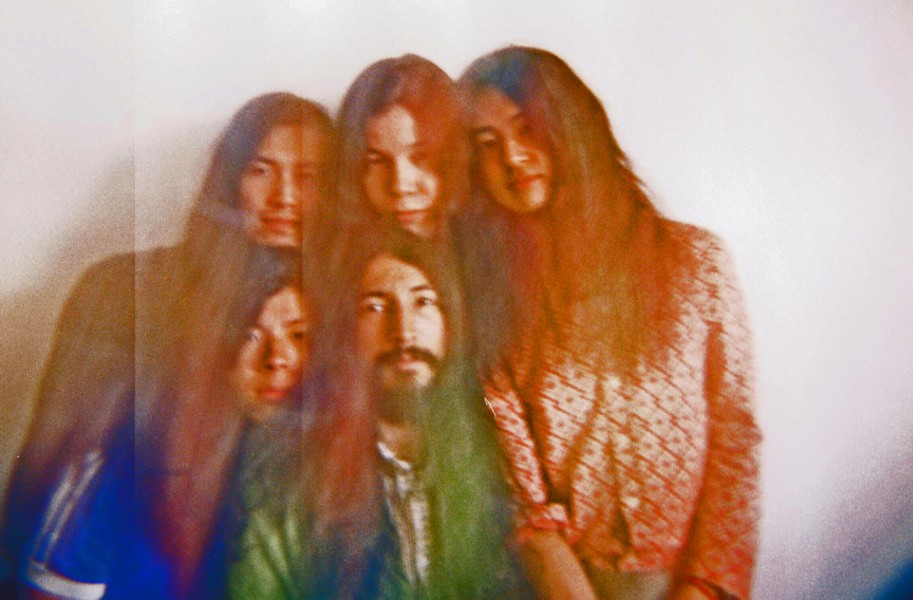 It’s possible that there’s a stoned monk wandering around the labyrinth of Kikagaku Moyo’s lyrics. He might be sweetening some tea with green sugar.

“When we started listening to [Western] music when we were growing up, I didn’t know what any lyrics meant. So lyrics are never important for me,” says the band’s drummer, Go Kurosawa. “When I hear Japanese music with Japanese lyrics, I have a really difficult time getting the words. I have to read or concentrate — it’s really tiring. … I wanted to focus more on sound, how sound hits your ear, instead of meaning.”

The percussionist goes on to say that if the band composed around English lyrics, instead of only emitting emotive vocal melodies, U.S. audiences would be forced to negotiate a song’s contents in a different way.

Beginning with its first disc, a 2013 self-titled effort, the band has split allegiances between folk-facing psychedelia and heavy jammers, latticed in equal parts by sitar and flowery Bay Area rock moves.

But Kikagaku Moyo’s unrestricted palette, in part, springs from members’ contemplation of others’ creative works. The Tokyo-based ensemble is really an exercise in imagination — it isn’t crafting a wholly original template. It’s summoning a well-worn vibe from earlier ensembles, mindfully puzzling in pieces that the group finds pertinent.

“I feel like what we create is not completely new,” Kurosawa says. Spending about five years in school in Colorado, he and guitarist Tomo Katsurada, who also did a bit of time in stateside academia, had enough American culture wash over them to prime an interest without filling in all the details.

“We are influenced somehow from something — consciously or unconsciously. Like Richard Brautigan or other authors — it’s really different from what we know and what we see being from Japan,” Kurosawa says of the absurdist post-Beat writer. “When he talks [about] his surroundings in the Pacific Northwest, I can kind of imagine, but not really get the full picture. I try to make the scenery in my head and see what kind of music would fit in those situations. That’s when I get different ideas.”
On Kikagaku Moyo’s second U.S. tour, the band seems to be closing the circuit sparked by ingesting American culture, serving it back to us with enough mystery in the menagerie of sound that passes for lyrics. But as the band drives from Milwaukee, Wisconsin, to Springfield, Missouri, Kurosawa explains how even operating a label and playing shows is a different kind of endeavor in Japan.

“The fact that we lived in the U.S. totally shaped how we wanted to do it by ourselves, not to be exploited,” he says, detailing a pay-to-play structure that most performers in Tokyo experience. “Especially when you’re starting out, you spend much money practicing and [playing] a show, and you have to pay. Most of the time in Japan, that’s normal, so they don’t mind paying. But for Americans, [they ask]: ‘Why do you have to pay? That’s messed up.’”

Extricating themselves from that sort of costly arrangement entails hitting markets outside Asia to play festivals. And as the members of Kikagaku Moyo stay on the lookout for ways to direct their careers, they founded Guruguru Brain, an imprint almost certainly referencing a German psych band. But the label’s not laser-focused on psych. Such acts as Minami Deutsch work in sympathetic territory. Nawksh, though, comes off as a more digitized Animal Collective.

“This is our challenge,” Kurosawa says about the diversity of the label’s releases. “A few years ago, we realized that there are so many artists and bands in Asia. We wanted to contribute somehow, to distribute records and do promos, bring those bands to the U.S. and Europe. We wanted to help out the artists.”

Altruism in the music industry, at any level, comes as a surprise. But the generosity in both its business and creative life enables Kikagaku Moyo to dispatch the dreamy folk on its latest album, “House in the Tall Grass,” while retaining only hints of tripped-out electric soloing that filigreed earlier works.

Now, the only thing Kurosawa has to answer to is the scenery rushing through his mind after reading “Trout Fishing in America.” S