Dreaming of a Welsh Christmas

The holiday spirit is captured in Richmond Shakespeare's "A Child's Christmas in Wales."

It happens when bandleader Andrew Hamm breaks into a minor-key arrangement of "It Came Upon a Midnight Clear" midway through the second act. That is the moment when Richmond Shakespeare's "A Child's Christmas in Wales" transitions from a heart-warming, highly entertaining night of theater into something extraordinary. The minor setting gives the holiday classic an eerie twist and, together with director Jan Powell's simple stagecraft and the spine-tingling harmonies of Liz Blake White and Elisabeth Ashby, evokes unexpected and elemental emotions, reaching depths not usually aspired to by more frivolous seasonal fare. 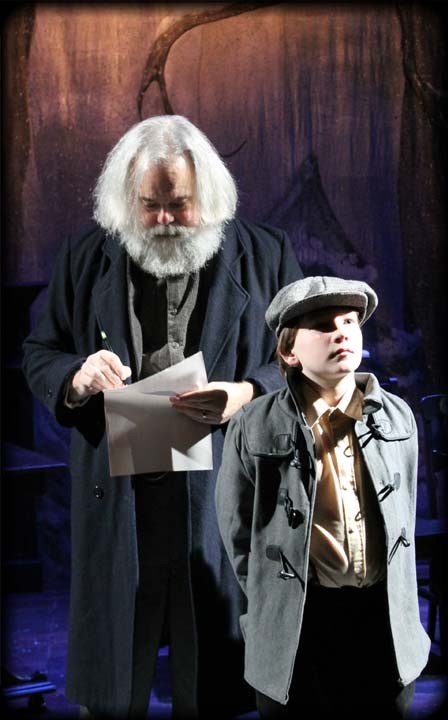 It's a powerful moment, just one of many in this original adaptation of an essay by poet Dylan Thomas. In a series of lively, impressionistic scenes, the concise 90-minute show recalls Thomas' memories of Christmas in his Welsh home circa 1928 surrounded by his mom (Ashby), dad (Douglas Scott Jones) and siblings (White and Axle Burtness). While there is plenty of love and good cheer, there is also danger — the song "Silent Night" is used in a particularly creepy manner — and adventure (children prepare for an epic snowball battle) with a great deal of humor.

There is also Thomas' rich lyrical language, which conjures up all that is weird and wonderful about the holiday season, from the unusual baubles found inside a Christmas stocking to the habitual foibles of the extended family during a holiday feast. The actors animate these words skillfully, with John Porter portraying the elder Thomas with a melancholic, wistful tone in contrast to David Millman's spry portrayal of the pre-teen version of Thomas. Jones has a nice comic turn cross-dressed as tipsy Aunt Hannah, who likes a generous spot of rum in her tea while Burtness brings nimble energy to everything he does, including brandishing a candy cigarette and building a snowman.

Virginia McConnell's plain, rustic costumes and Brian Barker's minimalist set help establish the rural late 1920s setting. In his creative musical arrangements, Hamm complements the action perfectly, from the rat-a-tat drum track pepping up "Joy to the World" to the straightforward accompaniment that makes "Oh Holy Night" a showcase for White's sweet, soaring vocals. Working with Michael Knowles on cello and Jake Allard on percussion, Hamm enhances every mood, from the antic comedy of "Mrs. Fogerty's Christmas Cake" to the beautiful reverence of the Welsh tune that closes the show.

By marrying her superior directing skills with Hamm's musical prowess, Powell offers a production that rises into the realm of true theater magic. S

Richmond Shakespeare's "A Child's Christmas in Wales" is playing at the Theatre Gym at Virginia Repertory Theatre though Dec. 23. Go to richmondshakespeare.com or call 800-838-3006 for tickets and information.