Training camp sponsorships, golf outings and the VIP treatment: How the city and the Redskins dole out the perks. 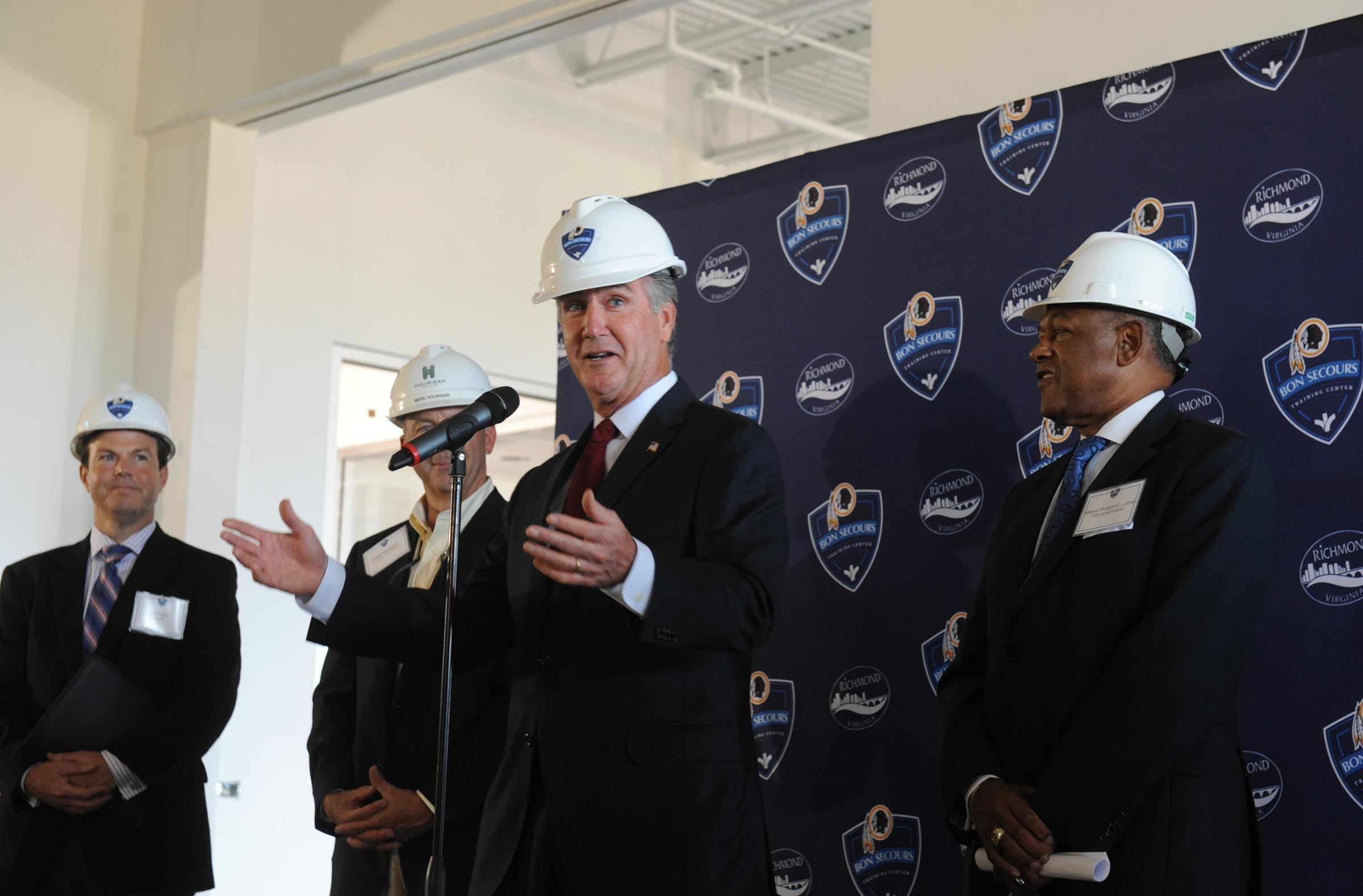 At the Redskins training camp in Richmond the grass is taking root, construction is on schedule and officials are beaming.

Mayor Dwight Jones, meanwhile, has a message for anybody who doubted the efficacy project: "We want you to know that the proof is in the pudding and we'll have this facility ready for a grand opening in July. That's a major accomplishment and we're extremely proud and extremely happy about that today."

But with a little more than a month until opening day, two items go unmentioned during the celebration of the on-time success of a prestige project.

First, city officials have some perks to look forward to when football season approaches: The Richmond Economic Development Authority's contract with the Redskins offers the city access to a luxury suite for 20 guests at FedEx Field during the home season opener and two pre-season games, along with a host of other VIP packages to be used at the city's discretion.
Second, while tickets for games and golf outings are secure, a Freedom of Information Act request reveals that the authority has yet to finalize any of the additional sponsorship or lease agreements it's counting on to repay the $10 million grant put up by taxpayers to finance the project.

Bon Secours Health Systems got the project rolling by committing $6.4 million over 10 years to pay for naming rights to the camp, behind the Science Museum of Virginia off West Broad Street, and a lease for a sports medicine center Bon Secours will operate there. The facility's official name, according to a "nomenclature guide" released by Redskins press agents, is "Bon Secours Washington Redskins Training Center."
But by its own accounting, the authority says it needs to gross at least $16 million over 10 years to cover operations costs — including construction costs, maintenance, management and other expenses — and repay the grant money put up by the city to cover construction. Factoring in the Bon Secours deal, the authority needs to bring in at least $10 million more in sponsorship and lease payments.

Richard Johnson, the chairman of the authority, says rental money from the 20,000 square feet of office space available on the second floor could bring in $750,000 annually. No leases have been signed, but he says the authority is courting serious prospects and expects to sign its first deal early next month. Separately, Bon Secours announced Monday it planned to lease 5,000 feet of space for additional offices on the second floor, but hasn't signed a lease.

Assuming the office space is leased at full capacity for 10 years, the authority will need to raise at least $2.5 million in sponsorships. Johnson acknowledges there's uncertainty about how much revenue the hypothetical sponsorship agreements might yield annually. But he's optimistic.

"It's just very difficult to predict," he says. "The 30 days before [the Redskins] get here is going to be a whirlwind of activity. My guess is we'll still be signing people up … days before the camp" opens.

Unknowns aside, when asked about the VIP perks tacked on at the end of the authority's contract with the Redskins, Johnson says the city's Department of Economic Development will decide how they're used.

The contract spells out a list of marketing amenities the Redskins will provide for the city while it serves as host of the team's training camp. There are ads in the Redskins program, air time on the jumbotron at FedEx Field, and the availability of talent and cheerleaders to participate in local events and banquets.

Some of the Redskin's contractual offerings are far more exclusive:

- A 20-person VIP tent at the practice facility for use by officials.

- Entrance for a team of four in a Redskins annual golf outing in Northern Virginia.

- A 10-person VIP table at the annual Redskins Welcome Home Luncheon, which the contract says celebrates the players' return to Washington from training in Richmond.

- A VIP hospitality package at FedEx Field for as many as 20 people at two home pre-season games and the home-season opener. The city has the option to use a luxury suite or get club-level access at the stadium, which includes food and drinks.

The mayor's press secretary, Tammy Hawley, didn't respond to questions by deadline about how the amenities will be distributed.

Johnson says the tickets may seem like an asset from which only a few will benefit, but he notes they can be used to the advantage of the city as a whole. "The perfect example would be taking some economic development prospects to show them a good time at the Redskins game and really help cement a deal where we're competing against two, three, even four other cities," he says. "It would just give us a leg up."

Which city officials will be burdened with schmoozing clients in a box at a professional football game? To be determined, Johnson says. "One could jump to any conclusion they want to," he says, "but I think it would be fairly naive to think that the mayor or any of the big shots at City Hall would be confiscating these for their personal use."

City Council President Charles Samuels, who represents the district in which the camp is located, says he hasn't been involved in discussions about how the tickets might be used. And he says he doesn't expect to be. All he knows is that no one's invited him to any Redskins games or golf tournaments.

"I would venture a guess that there are as many ways to distribute these tickets as there are Redskins fans in Richmond," he says. "But technically the mayor is the head of the city … so realistically, while I bet every football fan has an idea about how they should be distributed, it's going to be something more that the administration deals with." S