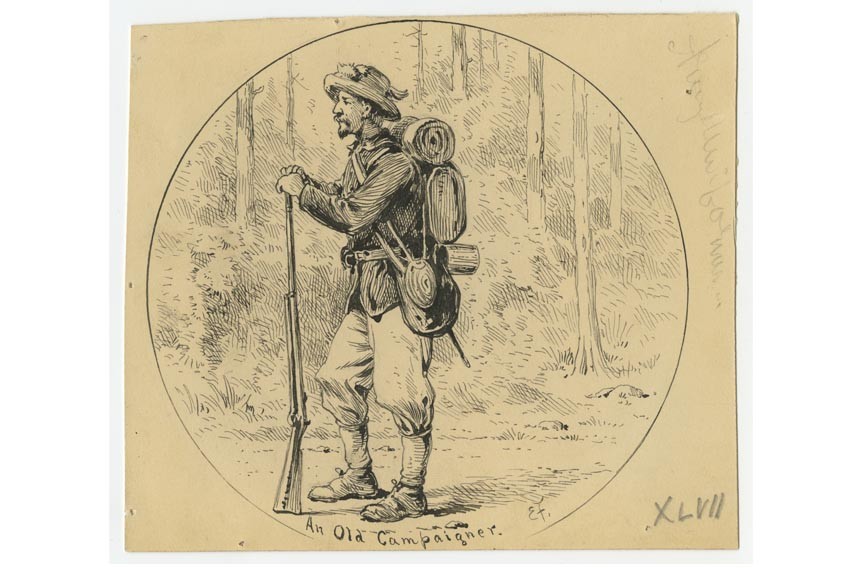 What 23-year-old could resist becoming part of a group called the Bohemian Brigade? For Edwin Forbes, an artist from New York, it was an opportunity to join a group of reporters who called themselves by that name that was sent to Virginia in 1862 to draw war scenes for Frank Leslie's Illustrated Newspaper. At the time, cameras couldn't capture motion — not that it mattered, because newspaper printing technology didn't allow for the publication of photographs. Sketches reigned supreme.

"He recorded the war as he saw it and his style was very straightforward," says Andy Talkov, head of program development for the Virginia Historical Society. "He was near enough to the action that his life was frequently in danger."

"An Artist's Story: Civil War Drawings by Edwin Forbes" exhibits more than 120 drawings depicting military life in battle and at rest. His illustrations, along with those of other artists, were instrumental in shaping the perceptions of an apprehensive public, most of whom never saw a photograph of a battlefield during the entire war.

Significantly, they also were the starting point for a book Forbes put together in 1890 called "Thirty Years After: an Artist's Story of the Great War." The original pencil sketches became the starting point for creating the pen-and-ink drawings for the book. Its detailed text provides a wealth of information about each depiction, often revealing Forbes' personality.

"Some artistic license was used when he translated the sketches to pen and ink," Talkov explains. "He might have added a flag, for instance. There's also the possibility that Forbes had been colored by 30 years of distance between the 1860s sketches and the 1890 pen-and-ink drawings. He essentially spent his entire career doing Civil War artwork."

In addition to battle scenes, some pieces in the exhibit provide an intimate and informative look at daily life during the war. The telling "Washing Day: Column on the March" shows soldiers marching with their laundry draped over their rifles, air drying. For an infantryman, what better way to ensure dry, clean clothes the next day? "An Old Campaigner" shows a 20-something man whose face and demeanor reveal the ravages of warfare. Humor surfaces in "News at the Front," which shows a soldier lying against a small foothill at Antietam, Md., reading a newspaper while the enemy's bullets send shards flying from nearby rocks. Apparently, a soldier has to read the paper sometime.

"He wasn't particularly good at drawing people's faces, so there are not a lot of realistic portraits," Talkov says. "The common soldier was a favorite subject, but the horses he drew have far more personality than the men. Forbes liked being with horses."

Forbes left combat in the fall of 1864, tired of being in the field and dealing with an increasingly unpleasant world, but not before he documented his own digs.

An 1864 drawing called "My Studio" shows a standard A-frame tent with an Army-issue stove, an improvised chair and front and center, an easel. It looks like the kind of setting from which a bohemian 23-year-old would have had the adventure of a lifetime. S

"An Artist's Story: Civil War Drawings by Edwin Forbes" is on exhibit at the Virginia Historical Society through Jan. 7. For information call 358-4901 or go to vahistorical.org.