Drag Me to Heaven

Visiting God's boo house: The afterlife, it turns out, is a scary place. 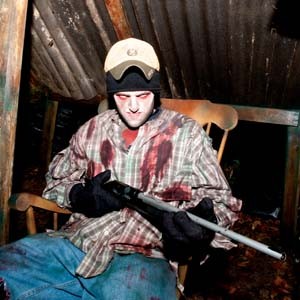 Repent, ye of little faith, lest the serpent consume you. Yea, in Hell there shall be fearsome clowns, and strobe lights, and also chain saws.

But the righteous shall ascend to Heaven, where they shall bang their shins and be mightily confused.

This Halloween attraction is not a classic “hell house,” in which visitors are shown disturbing scenes of heroin addiction, suicide and botched abortions. Instead it's meant to be a “truth-based haunt,” explains Kelli Lieder, who runs New Hope Community Church and the haunt with her husband, pastor Neil Lieder. The New Kent County attraction, which is the church's biggest evangelistic outreach, is intended to get people to think about the afterlife and the choices they make.

Three doors stand at the entrance to the Journey to Heaven: Fame, Fortune and Faith. You can probably guess which one gets you into the good place.

Stepping into a dark chamber full of obstacles, visitors are told to cling to the arms of a big foam cross and follow the instructions from the unseen voice within.

“Go left,” he tells us. We stumble into a black plastic wall. “Left. Left.”

The voice of Divine Guidance gets a little testy.

We finally make it through, only to encounter an alcoholic sprawled in a pile of wine bottles and a manic scientist in his laboratory. In a classroom at “Tolerance High,” a teacher is writing “In God We Trust” with a marker. She clutches her bloody side and tells us she's been shot.

“Do you need help?” we ask, wondering if this is a test of our moral fiber.

Lying on the floor, the teacher starts laughing uncontrollably. She waves us along.

It's not actually heaven, Kelli Lieder later corrects me — it's the trip up there. “If you take the premise of ‘Here, you're in heaven,' you can't create a haunt out of that.”

The Journey to Hell is a series of dark rooms and wooded trails accessed through a 7-foot-high serpent's mouth. Its denizens include an avaricious woman guarding her treasure, a demon lurking in a maze of crooked pews and standard boo-house frights such as the chain-saw guy and the evil clowns. I scream. A lot.

The clowns chase us right up to the exit, where Lieder waits like the final boss in a video game. He talks for a moment about a friend who was a warlock, found Christ, and soon will be featured on “Extreme Makeover: Home Edition.”

The next attraction is the Journey to the Past Museum, where an assortment of props represent the grossest scenes from the Bible.

John the Baptist's livid, bloody head stares from a plate. A bucket of jiggly green slime, embedded with fish and shells, is what came out when the whale upchucked Jonah. There's Joseph's bloodstained coat, Judas' bag of silver and the donkey's jaw bone that Samson used to smack down a thousand Philistines.

We wrap up our visit with a wagon ride past a collection of scarecrows. “No making out,” the driver warns.

Journey Trails was inspired by the church members' visit to one of the most famous religious haunts, Liberty University's Scaremare in Lynchburg. At Scaremare, Jesus Christ joins Freddy Krueger and other ghouls to frighten, and often convert, thousands of visitors. “520 first-time decisions for Christ!” the Scaremare Twitter feed crowed on Oct. 16.

Although nowhere near the scale (or budget) of Scaremare, Journey Trails, in its seventh year, is making a name for itself. The monsters' makeup is done by the Lieders' daughter, Kristi St. Mary, who has won the makeup competition at the National Haunters Convention two years running. Sixty-two volunteers participated this year, more than the entire congregation of New Hope.

The haunt even gets a few converts. “We did have a little girl come to know the Lord in the museum last week,” Lieder says.

Because a bout of whooping cough had left the girl with a permanently raspy laugh, a church in her native Puerto Rico had decreed that she was possessed by the devil. That's not true, the Journey to the Past museum guide told the girl: “You are made in the image of God.”

And yea, the righteous didst rejoice, and headed back to Interstate 64.