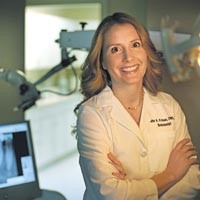 Dr. Trisha Anne Krause recently spent a three-day weekend away with her husband this summer. When they reached their destination, Krause was greeted by 60 people, some of whom had slept in their cars overnight to see her. Many had their mouths wide open upon her arrival.

This was no romantic getaway. Krause, who specializes in endodontic dental care, primarily root canals, had traveled to Wise County to offer relief to scores of underserved patients with little or no insurance. Krause and three endodontic residents from VCU Health System performed 60 root canals at no cost to the patients. With one root canal estimated to be worth $1,000 by the Virginia Dental Association, Krause performed at least $60,000 worth of service.

The New England native began her service in Virginia after seizing an opportunity to buy her own practice in Richmond when she completed postgraduate courses at Virginia Commonwealth University. In order to get to know the city, she began volunteering, starting with Stop Child Abuse Now. Krause has since risen to serve on SCAN's young professionals' board. She's also watched her practice grow while weaving herself into the fiber of Richmond's safety net of health care, donating hours in and out of her own office.

“She is not only technically exceptional,” says the Virginia Dental Association's executive director, Dr. Terry Dickinson, “she is truly a servant to those she serves at our projects.”