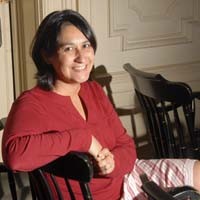 Put the two groups together, and you have a powder keg ready to blow -- and nobody aware of the need to call the bomb squad.

Enter Dr. Rosalie Corona, who's trying her darnedest to snuff the fuse. An assistant professor of psychology at VCU, Corona arrived in Richmond about four years ago. It didn't take long before she saw what few others had seen. As a California-born Latina, she'd grown up aware of the need all around her, and as a mental-health clinician with a doctorate, she instantly realized that Richmond's Hispanic health issues were rarely part of the conversation.

They are now, thanks to Corona's research — the area's first needs-assessment studies conducted on Richmond's Hispanic communities — and the mental-health clinic she now offers as a result of her research.

In addition to revealing other areas of health services that are lacking, Corona's survey of 200 Hispanic adults found that among top needs were mental-health services for issues ranging from depression to post-traumatic stress disorder.

Corona says she could have stopped after she'd completed her survey, but "that just doesn't ever feel right to me. I can't be the kind of researcher who just hides behind my numbers."