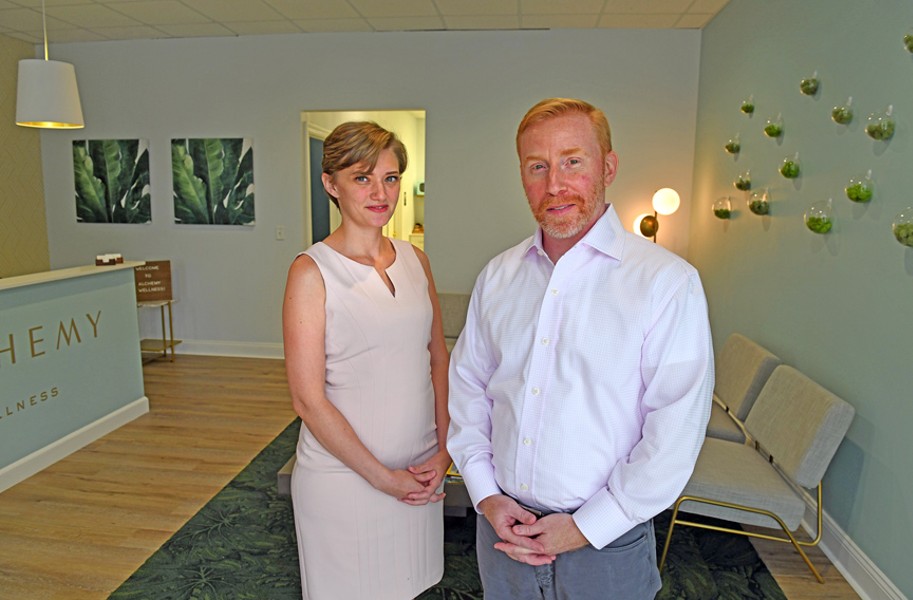 Suicide rates are up, particularly among white men, who make up the vast majority of suicides. In Virginia, suicides rose 17.4% from 1999 to 2016, slightly less than the 25.4% national bump, according to the National Alliance on Mental Illness.

As you may have seen in recent reports involving President Donald Trump and the United States Department of Veterans Affairs, there is a controversial new treatment that proponents say could be a game changer: ketamine.

Yes, that ketamine. It’s been around for decades. Many know it either as an animal tranquilizer or a party drug. But one Richmond doctor believes it provides an innovative new tool in the fight against treatment resistant depression.

“It’s one of the great examples of medicine being repurposed,” says Randy Frederick, medical director of Alchemy Wellness, a ketamine infusion clinic in Richmond. Frederick is a board-certified emergency medicine physician and Navy veteran who received the Hanover Crisis Intervention Center medical provider of the year award in 2017.

For the past several decades, the main treatment for depression has been selective serotonin reuptake inhibitors, known as SSRIs or SNRIs, such as Prozac, Zolaft and Celexa, which Frederick says can take a minimum of four to eight weeks to show any effect and are known to have side effects — while a third of people don’t respond at all.

He believes that ketamine works by increasing neuro-plasticity, allowing brain cells to establish more and better connections between neurons, essentially regrowing connections that have atrophied in depressed patients. He’s also been using it for chronic pain treatment to offer an alternative to opioid medications.

So far, there are only two ketamine clinics in Richmond. Alchemy has been open for about two months. Frederick and his partner, nurse practitioner Rachel Featherstone, opted to go the infusion route rather than the insurance-approved nasal spray, because it allows for much “better control” he says.

“We take a holistic approach,” Featherstone says. “Our clients see both of us, and we maintain good communication with all doctors involved with a patient.”

Ketamine was first approved by the Food and Drug Administration in 1970 as a dissociative anesthetic that became important in developing countries. Frederick says he often used it in the emergency room because it didn’t drop the respiratory drive or blood pressure like a lot of sedating medications.

A paper written two decades ago first showed how it might work against depression. Now ketamine has momentum thanks to a new nasal spray called Spravato, formulated by Johnson and Johnson via Janssen Pharmaceuticals, which got fast-tracked FDA approval for treatment resistant depression in March.

So why has it taken so long for ketamine to be approved for this use?

“The general consensus is that ketamine had been a generic medication for awhile,” Frederick says. “There was no opportunity for a pharmaceutical company to make a profit.”

Professional opinions vary on its effectiveness. The VA decided to restrict the use of Spravato to a pre-approved, case-by-case basis, waiting for more data.

Frederick characterizes infusion treatments as “the gold standard” and says the protocol is six infusions over three to four weeks, then booster infusions as needed, which is patient dependent. Unlike the spray, the IV infusions are not covered by insurance and cost $495 per infusion — an important consideration. Frederick notes that Alchemy offers no-interest financing for 14 months as well as discounts to military, first responders and health care providers suffering from post traumatic-stress disorder.

“There’s a lot of overlap between all these syndromes, more than 50% of veterans suffer from PTSD with concurring pain problems,” he says.

Frederick encourages those interested in learning more to attend a monthly patient and provider information session held at Alchemy Wellness, 8639 Mayland Drive, Suite 102. The next one will be held Sept. 10, which falls during Suicide Prevention Awareness month. — Brent Baldwin


Back to The Innovation Issue