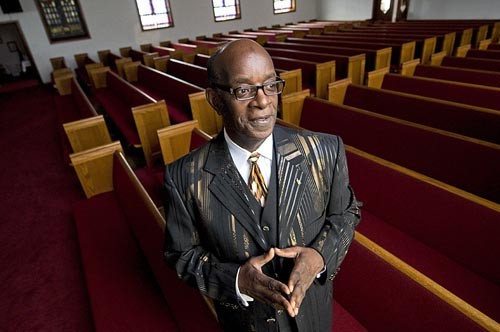 In the right hands, the pulsating swells of the Hammond B-3 organ can make your heart soar or your eyes runneth over. No wonder it's a cherished instrument in many churches — it's also more affordable than those huge pipe organs.

Richmond has its own master of the bold B-3: Harold Lilly.

Lilly, 66, has been playing the instrument for local churches since he was a child and is on staff at Morning Star Baptist Church. “I taught myself how to play through the church,” Lilly says. “It's been a life full of music.”

Lilly's son, Harold Jr., is a Grammy-winning songwriter based in Los Angeles who's penned songs for Luther Vandross, Alicia Keys, Jamie Foxx and others. The elder Lilly may not have released any commercial albums, but he's moved plenty of people with what he calls his “Lilly touch.” He prefers to make his own tapes and CDs of his playing and give them to appreciative seniors through the church, he says.

The rough-and-tumble strength of the Hammond B-3 is in its ability to sound like other instruments, Lilly explains. “It's all in the person at the bench,” he says. “Playing is just like cooking. The average woman knows how to cook, but it's in the seasoning. It's what you put into it that allows the listener to hear who you really are and feel it.”

Lilly will have a drummer with him for his sets at the folk festival, and possibly his daughter, an accomplished singer. He says his set will include a patriotic section but mostly sacred and gospel music. Additionally, he and Daryl Davis, master of boogie-woogie piano, will conduct a keyboard workshop that should sizzle with soulfulness.