More than 100 protesters gathered outside the SunTrust Center at Ninth and Main streets Wednesday morning for a visit from U.S. Attorney General Jeff Sessions, who was speaking to an invitation-only crowd of law enforcement and media representatives.

Sessions, a former Alabama senator, didn't walk past the protesters, and it’s unclear when and how he entered the building for the 10 a.m. event. The crowd had gathered by about 9:30.

The Republican is under pressure from some Democrats and progressives to resign, because of his contacts with Russian diplomats during the presidential election. In his confirmation hearings, he said that he had none, but it later emerged that he met with the Russian ambassador twice.

Sessions recused himself from investigations into Russian interference with the election, but the protesters and others called for his resignation. 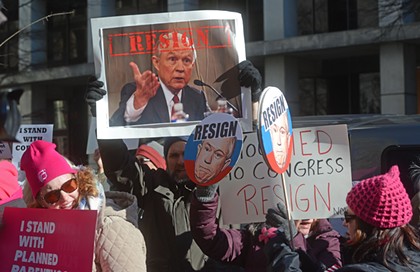 Richmond Chief of Police Alfred Durham attended the Sessions meeting inside. Sheriff C.T. Woody’s office said he was invited as a regional public safety partner, but his schedule did not permit him to attend.

Mayor Levar Stoney’s office said that he was not invited and did not meet with Sessions.

The office of Virginia Attorney General Mark Herring confirmed that Herring also wasn't invited to the event and noted that Herring has “worked extremely well with [Department of Justice] and the U.S. Attorneys in Virginia on gun crimes, heroin traffickers, and more.”

Claire Guthrie Gastañaga of the Virginia chapter of the American Civil Liberties Union addressed the crowd outside, asking members to engage with the local attendees of the meeting.

“People should demand that what he’s saying in there be public as well,” she said. “Because we have a right to know what he’s telling law enforcement in Virginia about how they’re supposed to do their jobs.”

According to Gastañaga, members of the Virginia State Police also were in attendance.

She spoke against Sessions’ policies of law enforcement toward immigrants and his track record on police. “I’m just here to stand in solidarity with people concerned about the way the Justice Department is being operated under Sessions,” she said.