The VCU Rams fall short, but not before proving their worth against the Hoosiers. 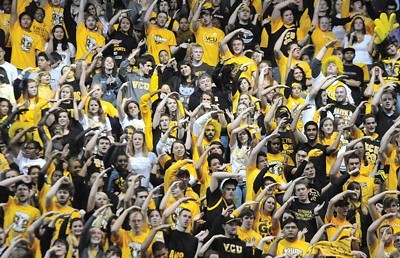 Let this loss settle. Virginia Commonwealth University probably should have beaten Indiana. The Rams played incredible defense to hold one of the best shooting teams in the country at bay for almost the entire game. They lost by a basket, 63-61.

But without question VCU men's basketball continues to show it can play with anyone, go toe-to-toe with the best teams in the country. The Rams were up 42-41 at the half, and the Hoosiers were shooting a remarkable 67 percent from the field. To the basketball prognosticators, those stats seem borderline impossible.

But it is, namely, because of the Rams’ remarkable full-court press. Before the game, motivational fuse boxes and kissing coaches aside, Coach Shaka Smart had a simple message: “Go after them.” Indiana coach Tom Crean boasted that his Hoosiers wouldn’t have any problem with the Rams’ press (“They can’t press if they can’t score,” he said, smirking), but Crean’s boys coughed up the ball more than they had all season, finishing the game with 22 turnovers. Both teams play at a fast pace, and the only question was which style -- the offensive efficiency of the Hoosiers or the defensive relentlessness of the Rams -- would win out in the second half.

VCU was able to hold the lead for nearly the full game, until the very end, because its 3-point shooting was incredible through the first three quarters of the game. VCU was 9 of 22 from behind the arc through the first 27 minutes; in the final 13 minutes, the Rams went 0 for 8. In the fourth quarter, in other words, the Rams went stone cold. The Rams are capable of playing tremendous basketball, but they also can stink up on the offensive end. And in the last 10 minutes against Indiana, they stunk.

But the Rams were winning -- they’d been ahead the first 19 minutes and 48 seconds of the second half -- until Indiana’s Will Sheehey caught a pass on the baseline, after a VCU block, and stroked the game winner with 12 seconds to play.

So now it’s officially over. Once the sting of losing to the Hoosiers wears off, and the Final Four magic carpet ride falls back to earth, it’s time to ponder the implications: Is VCU really a perennial Cinderella? Could the Siegel Center be home to Gonzaga East? Of course, the real impact of the team’s run a year ago, and this year’s extension, will be much harder to measure.

First, the Rams introduced, in dramatic fashion, the virtues of the full-court press. Lots of teams press, sure, but VCU will subject opponents to its trapping, smothering defense for an entire game, and its effects are bewildering. VCU mucks up a game like no other team in college basketball. Coach Smart’s havoc system leads to gobs of turnovers, but perhaps more importantly it wears opponents down physically and mentally. Fatigue leads to players “losing their legs,” and this most noticeably affects shooting touch (see Wichita State, Drexel and, yes, Indiana in the second half).

Against Indiana, the Rams were getting more than their share of press-induced turnovers, but VCU’s half-court defense was equally impressive. The Hoosiers are one of the best-passing, prettiest-offensive teams in the country. They were downright ugly against VCU.

Coach Smart has acknowledged that this year’s team is better than last year’s, defensively at least, and that the team is incredibly young -- it loses only one senior, Bradford Burgess -- bodes well for next year. That assumes Smart resists the big money and remains in Richmond.

Second, VCU’s success with the press should lead to copycats. Louisville, Florida, Missouri, teams that have had a reputation for pressing, have gotten away from it in the past few years. In an interview late last year, Shaka’s high-school coach, Kevin Bavery, explained:

“When you look at all the teams that used to press -- Florida, the Pitino teams -- they’ve kind of all gotten away from that,” Bavery, now head coach at Middleton High School in Wisconsin, told me. “With all the TV timeouts, they don’t feel they can get the same wear-out effect. Shaka proved them different.”

Yes, one might ask Tom Crean how confident he feels that his Hoosiers “handled” the pressing Rams. Rob Brandenberg front-rimmed the 3-point attempt at the end, and it bounced high and over the basket, which means he was maybe an inch short of knocking it down. Give the Rams that extra inch -- and they’re playing Kentucky in the Sweet Sixteen.

It will take some time for this one to heal. But make no mistake: VCU already has left an indelible mark on the NCAA tournament, and college basketball.