Down From the Mountain

Denali broke up during the last election year and returns in this time of change. 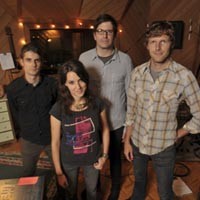 Richmond is cursed. Anyone who has lived here long enough will tell you that everyone who leaves it inexplicably returns at some point. This now holds true of indie rockers Denali. Four years after parting ways to pursue individual endeavors, its four members are all living here again. They now find themselves holed up in Black Iris Studios preparing for one of the most anticipated reunion shows in recent memory. Their unassuming rehearsal space is tucked away in Scott's Addition amidst a host of industrial supply stores whose occupants might ask what a Denali is. After four years, what's the big deal about these kids anyway?
Denali formed in 2000, when Maura Davis asked her older brother Keeley, then lead vocalist for Engine Down, if he wanted to start a band. They recruited Cam DiNunzio (formerly of Lazy Cain) and Engine Down's other vocalist/guitarist, Jonathan Fuller, to join the venture and eventually went on to become one of Richmond's most impressive bands, drawing comparisons to everyone from Radiohead to BjAŸrk. They toured relentlessly and signed with a label, Jade Tree, a year later. Maura's pristine voice, cradled by haunting melodies and cinematic arrangements, intoxicated audiences worldwide and established a massive fan base. Their pouts ended up in Rolling Stone, Spin and CMJ.

Hearts sank in 2004 when the foursome broke up and the great Denali diaspora occurred. "I guess that when Keeley and Jonathan left to focus on Engine Down, it just didn't feel the same," says DiNunzio by e-mail. "When the band first started, it really felt different and special in so many ways, and I think we all feel that it's just as special now that we're back together again. It just became obvious that for what we do specifically as Denali, it's got to be all or nothing."
Only Fuller remained in Richmond, "holding it down," he says. DiNunzio moved to New York and worked for RCA Records, while Keeley and Maura found themselves involved other projects, including bands Glos, Ambulette and Sparta.
A whopping eight years since their inception, they've set the indie-loving hearts atwitter by reconnecting.
"We all live in the same city again," explains bassist Keeley during a break from rehearsal.
"We just decided to play music together and see how it feels," drummer Fuller adds. "We played together a few times and said, 'This is really awesome. ... let's do it.' And so they did.
The reunion is not the kind of elaborate affair that will take Denali's members across the country and stall their lives with enforced creativity. "We're trying to keep it from feeling like a job or a chore," Fuller says. "We're trying to foster creativity and not ever have it feel like an obligation. It's easy to fit what we do around this."
As of now, the plan is fairly simple. "More new songs. A show here and there," says Fuller. Later this summer, Denali will hit the West Coast, playing a festival in Los Angeles on Labor Day weekend and then likely playing a New York gig in the fall. Post-tour, the group plans to write more songs and flesh out its arsenal of new material.
"I'm very excited to write," says Keeley. "I'm anxious to see what we come up with ... if it's crap or not."
"Well, it's going to be one of the two," adds DiNunzio. "We have a 50/50 chance."
Maura chimes in, saying she's been listening to a lot of Al Green lately and jokingly suggesting a soulful new direction for the band. The idea is immediately rejected by Keeley, who says he's not "that good of a bass player."
Denali's return to the Richmond scene finds the band relaxed and confident, displaying a sense of maturity that has assuredly been ushered in by marriages, births and day jobs. Maura has begun a career in nursing, Fuller beams about his baby at home and DiNunzio marvels at the fact that he has a wife now, blogger Susan Howson. When Keeley reminds him of this fact, he still seems to be in disbelief. "I know," says DiNunzio. "It's only been a month, so I'm still getting used to it."
The band is also quick to dote on Richmond's developing scene. Not surprisingly, the band sees the advent of The National and Toad's Place as a benchmark, a sea change from their last incarnation, when Alley Katz was as big as it got and musicians in other cities would scold Denali for having such an unfriendly scene.
As the elder statesmen of that scene, the members of Denali admit that finding openers for The National show was a bit difficult. "We didn't know who to talk to or who had a draw," says DiNunzio. "Tulsa Drone was the only band that we were mildly familiar with. It was fun to listen to all the new stuff that's going on in the city."
"It's kind of fun to be the grandpas," adds Keeley.
In the studio, the vibe is casual. DiNunzio is throwing out a few recognizable Weezer riffs, while Keeley works out what seems to be a technical difficulty with the pedals beneath his feet and Maura is in search of lip gloss. Fuller summons them all to attention with a few drum kicks, and they launch into "French Mistake" as if they had never stopped playing. The next-to-last rehearsal before the big night proves that the 18 other rehearsals or so have paid off, but it sounds like it didn't take them long to find themselves again. S
Denali plays The National Saturday, July 5, with Tulsa Drone, Prabir and The Substitutes and The Great White Jenkins. Doors are at 7 p.m. Tickets are $10-$13. Call 612-1900 or visit www.thenationalva.com.