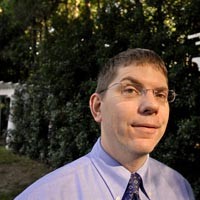 When Doug Hicks was in graduate school at Harvard, a famous professor memorably announced to the class that to achieve serious social change you had to have one foot in the academy, one foot in the world and one foot in the church. And how do you do that? he asked the class: You learn to dance.

The shuffle from his office in UR's Jepson School of Leadership Studies, where he's been an associate professor since 1998, down the path to the university's Center for Civic Engagement, which he founded in 2004, may not look like much of a dance, but it's his version.

Before coming to UR, Hicks was ordained a Presbyterian minister. Today, his classes and research focus on the intersection of ethics, religion and economic inequality as a social issue. His activities at the center, such as distributing reusable water bottles and organizing an ESL program for university staff, help make it a reality.