“Che” parts one and two offer too similar accounts of the same revolutionary. 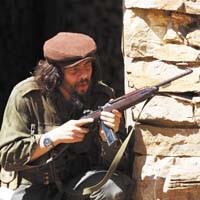 Most people who know of Ernesto Guevara share a common image: the ubiquitous photograph taken by Alberto Korda on March 5, 1960, the day after Che, at that point the No. 2 man in Cuba, supposedly gave first aid to victims of a munitions explosion in Havana. In the film version created by the director Steven Soderbergh and actor Benicio Del Toro, such is the meaning behind the fiery visage emblazoned on T-shirts everywhere. Che, the film shows us, was not afraid to get his hands dirty with the practical, competent daily tasks necessary for the revolution. You could call him a jungle bureaucrat, able to keep morale, supplies and training strong while the two men's armies marched to the capital.

And boy, do they march. The film is divided in two parts for release on IFC By Demand: “The Argentine,” which covers the takeover of Cuba, and “Guerrilla,” which follows the failed campaign by Che to mimic his Cuban success in Bolivia. Each is primarily an account of jungle warfare. Soderbergh, with screenwriter Peter Buchman, used Che's memoirs as his primary source material. The result is both a vivid and limited account, in which we learn in grimy detail about the intricacies of slogging toward victory, but next to nothing about what these people thought, or why they fought and died.

As a lifelike re-enactment of history, this portrayal of real men and women sweating out a revolution in humid country frequently achieves documentary realism. Some of the battles are extraordinary. The downside is that Guevara, along with co-revolutionary Fidel Castro (Demian Bichir), remains mostly out of focus as an individual. This may be how Guevara would have wanted it, since he supposedly told Bolivian government officials set to execute him that they were only going to kill the man. But as a piece of drama the point of view has its limitations.
Shortly after Part One concludes, even the most agreeable observer is bound to wonder what is to be gleaned from another two hours spent marching around in undifferentiated subtropical greenery, especially because the strategy and tactics are given thorough attention in the first half. The only difference in Part Two is that they don't work this time, and if anything Del Toro and his character retreats farther into the background.

“Che” has nonjungle moments, including some tantalizing black-and-white scenes at the United Nations in New York shortly after the takeover in Cuba. But somewhere between 2004's “The Motorcycle Diaries” and “Che” there's a movie meant to reveal who Guevara really was. (R) 257 min. HHHII S