This is a cutthroat, high-stakes game. Billions of dollars involving powerful entities and vulnerable public interests are at stake. 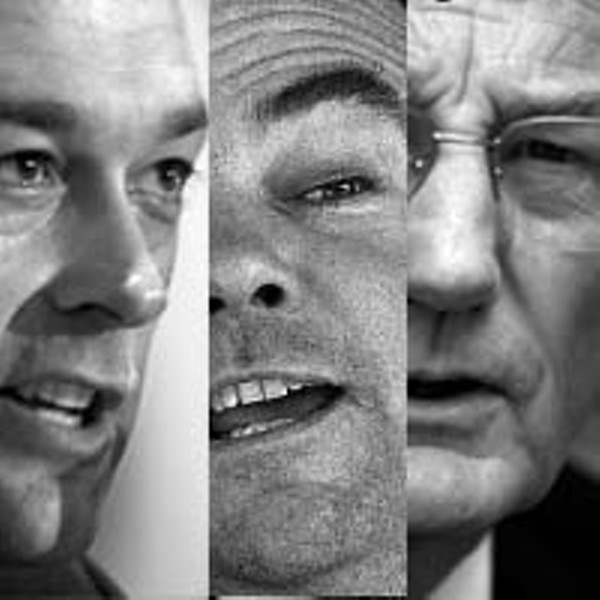 Why is Jerry Kilgore accusing Tim Kaine of planning to raise the gas tax, when many Democrats are wringing their hands over Kaine's adamant refusal to do just that?

Why is Tim Kaine saying that Jerry Kilgore "wants" to abolish the lottery, when the source of that claim is an outdated position from the 1990s?

Just because a leap in logic can be made or a statement supporting a claim can be found, that doesn't make it true. Politicians evolve. Human beings mis-speak. Newspapers and magazines can get it wrong.

Modern campaigns don't allow for any of that. Stretched logic and out-of-proportion claims are all part of the game.

As I said, that's how this column started out.

Trouble is, repeating that fact over and over doesn't tell the whole truth either. Plenty occurs in almost every high-stakes campaign to feed voter cynicism. But if that's all the public hears, then citizens get the notion that there's nothing admirable about those who seek public office.

And, most of the time, that's not true.

So here's a brief detour to tell you some admirable things I've observed over the years about Tim Kaine and Jerry Kilgore. Russ Potts, who's running as an independent Republican, is enough of a long shot that he's less apt to hedge positions and fudge the truth. Anyone can see that he's a ball of energy, fun to watch.

Whatever the ads tell you, Kaine was a good mayor of Richmond. It's a city with deep problems. He didn't fix them all, but he strengthened confidence in local government and left the city better than he found it. He's also done some heavy lifting for those on the margins of society, an admirable thing.

In one of several major civil rights cases, he worked long and hard to win a groundbreaking settlement against Nationwide Insurance Co. for race-based, discriminatory policies in the Richmond area.

Kaine spoke at the high school graduations of two of my children, and what he said was worth remembering both times. The first soliloquy enlightened a group of high-achieving kids on the transforming power of failure. The second delivered some original, gentle advice through personal vignettes.

Recalling a classmate who sought him out to mend their differences at graduation, Kaine urged the class to do the same. You'll never see a lot of these people after tonight, he said. He also recommended bearhugs for parents. His own family was more reserved, Kaine said, but he recalled admiring a classmate — a hefty jock — who didn't shy from letting his emotions show.

I haven't lived near Jerry Kilgore, but I know the place he comes from. I've driven through Gate City many times en route to my father's childhood and retirement home in the next county. Poverty and isolation are part of the landscape, even more so back when Kilgore was young.

So are tough individualism, a strong work ethic and the sort of extended family network that instills confidence in a beloved child. You don't move from that remote corner of Virginia to the pinnacle of the state's dominant political party without likeability and enormous self-discipline.

As for professional achievements, I admire the work Kilgore's done to fight domestic abuse and to instill more openness in state government. He's urged a whole litany of measures — from tougher reporting requirements for lawmakers to more open meetings of legislative caucuses — that didn't exactly endear him to the political elite, but made the process better.

So does this mean the gubernatorial election boils down to a contest between a couple of warm-and-fuzzy guys?

Not a chance. This is a cutthroat, high-stakes game. Billions of dollars involving powerful entities and vulnerable public interests are at stake. There are deep and important divisions between the philosophies of the two men, as evidenced by Kaine's strong support and Kilgore's strong opposition to a $1.4 billion tax-hike package for schools, public safety and health care in 2004.

Kilgore's expertise involves public safety; Kaine's is rooted in the interplay between state and local governments.

Each in his determination to win this race is sampling public opinion and playing to it in ways I don't fully admire. Why is Kilgore making so much of a local employment center in Herndon that he claims would encourage illegal immigrants? Why is Kaine willing to let single gays adopt but not couples?

In a nationally watched contest that may signal the direction of American politics in a post-Katrina era, the next few weeks will be filled with passion, heat, exaggeration and even outright lies.

It won't be pretty. Take a lot of what you hear with a grain of salt. I share with you a side of the major candidates that may get lost in the shouting, because — even if it's for the independent alternative — I hope you'll still find a reason to vote. S

Margaret Edds is an editorial writer for the Virginian-Pilot.