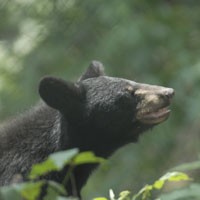 We sure found novel ways to thin out the animal population this decade. Michael Vick pitted them against one another, Mayor Doug Wilder euthanized and then memorialized them, Carytown was a good place to get bitten by them and Ashland and Midlothian both were stalked by them.

Heading toward the halfway mark, it looked like this would be the decade of Black Dog. The near West End's own canine guardian angel came close to his own Hollywood movie deal before heading for the big hydrant in the sky earlier this year. And the end of the decade saw the accidental death of SPCA leader Robin Starr's beloved dog, who was left for too long in her hot car. The tragic story quickly became national and drew polarizing opinions.

Then there were those two unwitting specimens of Ursus Americanus that never stood a chance against a tiny, unsupervised toddler and a very witting specimen of Politicus Dougus Wilderus. The child was bitten by one of the Maymont bears, who had to be put down to be tested for rabies. An outraged public, learning that the bear carcasses would be left in a landfill, demanded a memorial service, and a statue now stands in their memory at the city park. There is no such statue of Wilder.

Toss in roving bands of Hanover coyotes, wild billy goats standing sentinel over the Powhite Parkway, cheeky monkeys in Carytown and shadowy rumors of a panther stalking west Chesterfield and you have yourself a pretty packed episode of Mutual of Omaha. Calling Marlin Perkins!

Animal of the Decade: The Maymont Bears