Donkeys Pony Up For Party 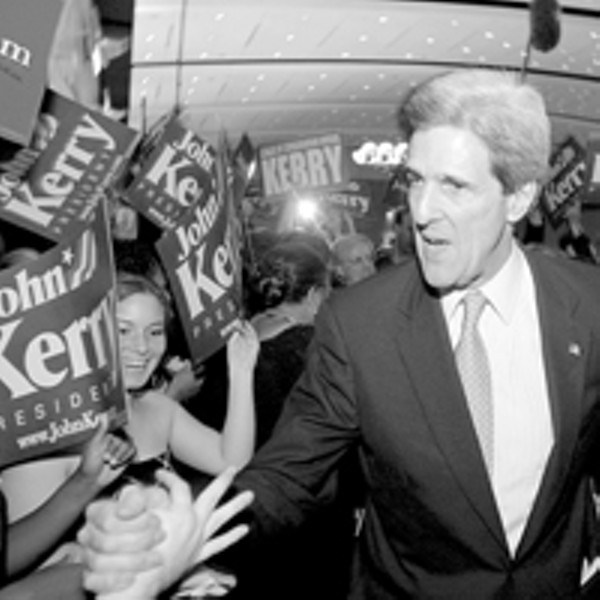 To be sure, there hasn’t been this much media attention and public focus on Richmond since it was suspected — wrongly — the sniper suspects made a call from a from a gas station payphone at Parham and Broad streets in October 2002.

Throngs of people were everywhere. Mobile media command units queued up along the closed portion of Marshall Street for a chance to capture Virginia’s take on the Democratic presidential primary. C-SPAN, CNN and FOX News were among the more than 60 media outlets represented, said Laura Bland, communications director for the Democratic Party of Virginia.

With stump speeches by Senators John Kerry of Massachusetts and John Edwards of North Carolina, as well as Ret. Gen. Wesley Clark and Rev. Al Sharpton, turnout for the party’s fundraising party was, with more than 2,000 guests, the best in its history.

“I like Richmond, I always have,” Sharpton said, shaking a reporter’s hand. He fell quiet when asked the Chamber of Commerce’s barometric question: “What comes to mind when you think of Richmond?”

The people who attended paid $150 to dine on boneless chicken, cauliflower, carrots and chocolate cake. At the back of the ballroom, a table of young Wesley Clark fans seemed to ignore their salads, preferring to sip a 2002 Mondavi Chardonnay. Richmond Mayor Rudy McCollum led the crowd in the pledge of allegiance, then asked everyone to stay until Tuesday – the state’s primary – and spend money.

“I’ve got to say, it looks like the women are better dressed this time,” observed Richmond Times-Dispatch columnist Mark Holmberg. Popular among women on the gray carpet was the strapless black cocktail dress – and at least a few tattoos.

Holmberg stopped in from his street beat still clutching his police scanner, wearing jeans and white sneakers. But mostly the men wore suits, with a few – like state Sen. Henry Marsh – donning tuxedos and boutonnieres.

“There’s some of everything,” Betsy Anderson, a volunteer for the Democratic Party said, about the coats at the coat check. The closet held mostly wool – overcoats and top hats – but there was also plenty of fur. Dressed in a gold lame blouse, Anderson graciously turned down tip after tip, assuring attendees she was one of them. “I’m just glad it’s not raining, so everybody’s coats would be wet,” she said.

Each of the candidates, with the exception of Al Sharpton, had what each must consider a very important theme song. Kerry – who, despite his name, is not Irish –entered to the Irish band U2’s “It’s a Beautiful Day.” Clark paraded in to Credence Clearwater Revival’s “Hey, Tonight” (“Gonna get it to the rafters/Watch me now”). Edwards, who was raised in Robbins, N.C. (year 2000 population 1,195), alighted to John Mellencamp’s “Small Town.”

As was seen most recently in Michigan and Washington, Kerry’s contingent was strong. “We as Democrats will not run from a debate about who represents mainstream America; we welcome it,” Kerry said, adding: “I believe that with faith in our ideals and in each other, we can return America to the mainstream road of greatness and justice.”

Two and a half hours had passed before Edwards took the stage. “You and I can build one America,” he told the crowd, now stirring about. “The South is not George Bush’s backyard, it’s my backyard,” he cried. Cheers erupted.

Downstairs in room B-17, the mood was quiet. A few dozen weary looking reporters and camera operators sat at tables tapping away on laptops. Upstairs in the ballroom, Jesper Bengtsson was growing desperately hungry. A foreign policy columnist for Stockholm, Sweden’s daily paper, Aftonbladet, he had just arrived in Richmond five hours before. He appeared grateful when a reporter’s wife offered him some rolls.

It was Bengtsson’s first time in Richmond and first time hearing the Pledge of Allegiance. His government, he said, is a monarchy; the people there are Social Democrats. The spectacle of the night’s event amused him. Tall, thin and blond, he chuckled often. But he appeared serious, too.

“What happens over here in America is of much interest to us,” Bengtsson said. And as the spotlight shifted, never diminishing until the very end, Bengtsson astutely surmised: “It’s like a basket game.” — Brandon Walters