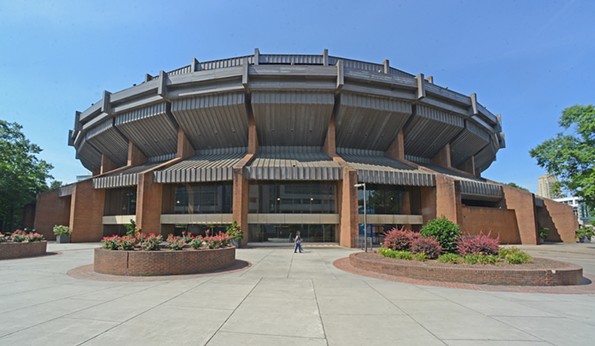 Like a giant mushroom in the heart of the city, the Richmond Coliseum generates grandiose redevelopment plans like a fungus.

Richmond BizSense reported this week that Dominion Energy chief executive officer Thomas Farrell and a group of investors have their eyes on a project that would transform the 1971 structure and the blocks around it. The state-regulated energy monopoly has even parked the domain dominionenergyarena.com in hopes of naming rights.

The question on everyone's mind is: Who will pay for this?

Currently, the city owns the Coliseum and makes loan payments on the property, as well as paying SMG to manage the facility. Those two figures, split about equally, add up to $1,762,094 in the coming year's budget.

A Richmond Times-Dispatch follow-up suggested that this was corporate-driven, that city officials have not seen plans yet. But they recognize the Coliseum as a drain and are open to ideas.

Some are likely to be wary of a plan that involves city money, in light of the event spaces the city already subsidizes, including the Greater Richmond Convention Center, the Redskins Training Camp, the Dominion Arts Center, the Altria Theater and the Main Street Station train shed.

And there's something eerily cyclical about the revival of this plan, two years after some residents successfully defeated a controversial city-backed proposal for a new baseball stadium in Shockoe Bottom. That was a revival of a 2003 plan and was expected to cost the city $80 million.

The math behind publicly funded centers, arenas and coliseums, like that of sports stadiums, has been questioned by academic studies and journalists alike. Economic impact numbers appear to be in the eye of the beholder.


The Richmond Coliseum can hold 13,500 concertgoers and a few thousands fewer for sports events, such as the latest iteration of a city arena football team, the Richmond Roughriders. The schedule for the summer shows a smattering of events — a Jehovah's Witness convention and a WWE Live event. The next concert is a Foo Fighters show in October.


The history of the venue seems to be one of diminishing returns.

In 1999, Virginia Commonwealth University opened the 7,500-seat Siegel Center on campus, pulling away the regular, popular men's basketball games. The university promptly stopped charging the admissions taxes that had been included with tickets, costing the city revenue. As VCU property, the Siegel Center was exempt.

In 2001, early rumblings of decrepit features and poor management began, when a nationally televised college basketball game had to be cancelled. Condensation from the ice rink below made the court slippery and dangerous.

Style architecture critic Edwin Slipek wrote about the area's resistance to cohesion in 2005 and made some suggestions for the neighborhood.

An hour west of Richmond, the University of Virginia’s John Paul Jones Arena was built in 2006. Seating 14,000, it surpassed the Coliseum for largest indoor arena in the state. It's also managed by SMG.

This is not the first time Farrell has led a charge of this sort. In 2010, Dominion and others spent $150,000 for a study on the Coliseum.

A few months later, the city released the three-volume "Arena Market Validation and Financial Feasibility Study" with flashy renderings and a lot of bullet points about revitalization.

Slipek summarized its conclusions in an article, suggesting Richmond embrace the Brutalist building and focus on revitalizing the surrounding area instead.

In January 2016, Manoli Loupassi, a Republican in the House of Delegates who represents Richmond's West End, sponsored legislation that gave the Richmond Metropolitan Transportation Authority power to build and operate an arena. Loupassi would not say who had encouraged the legislation.

The authority is in charge of regional toll roads and is governed by the city, Henrico County and Chesterfield County. The legislation required that the governing bodies of those municipalities agree to such a plan.

The city's appropriation to SMG, which also manages the city-subsidized Dominion Arts Center, Altria Theater and the Redskins Training Camp, will rise to $875,000 from $832,000. SMG cited the loss of revenue from the closure of Ringling Bros. and Barnum & Bailey Circus.

In April, NBC12 reported that the Coliseum has operated at a loss since 2014. City assessment values the 7.36-acre land at $12.3 million.

Earlier this year, Virginia Beach approved the construction of an 18,000-seat, $220 million arena to service the Hampton Roads metro region, which has a population of 1.7 million. SMG was selected to manage that venue as well.

Some argue that the the presence of the Charlottesville arena and a Virginia Beach one that's coming soon are all the more reason to create a Richmond draw.

Or, there's the flip side of that: Do we need a coliseum at all?