A glass conservatory gets its lid. 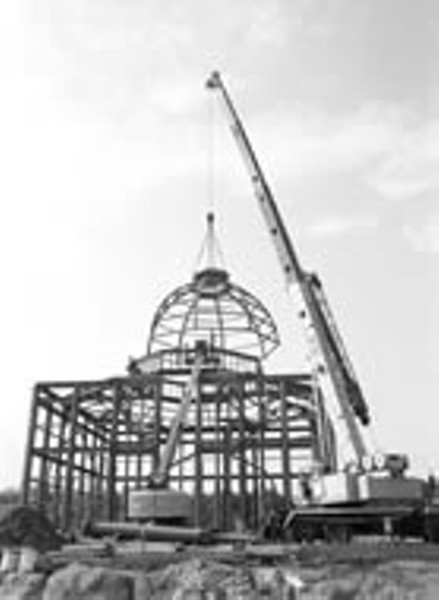 Beneath his hard hat, Waltz nods affirmatively, keeping his eyes on workers pounding the last two steel beams into the arc of the gigantic steel shell.

"It looks like they're getting serious now," Robinson says. He appears relieved.

Still, he's as anxious as any garden director would be when it comes to a $7 million conservatory being built on his watch. Especially when the 16,617-square-foot, classically designed, laminated glass house is the only one of its kind in the state. When completed next year, the structure will stand 63 feet tall and will house exotic and unusual plants from subtropical and tropical regions of the world as well as orchid displays and rotating exhibits of colorful flora. But for now it looms like pieces of a magically enhanced Erector set placed in the dry dirt.

It's after 3. Robinson had been given word the ceremonial lifting would occur much earlier.

"I called Bruce Gottwald and told him it was going up at 11," he tells a group of bystanders. "I'm glad Bruce was busy."

Local media had been told to come at 2. One TV news crew has come and gone, opting not to wait. Meanwhile, Robinson has been buzzing, beelike, about the botanicals, pausing now and again to talk up the moment to visitors inching curiously through the Sunken Garden.

Now it has come to this. A foreman signals to the crane operator: "All right, big boy!" The horn of the 100-foot crane answers back with two honks.

"This is the critical half-inch," Robinson says. "If it doesn't fit we're in big trouble."

He turns to an assistant and instructs: "Put out an all-call. Spread the word to the volunteers that the dome is going up."

About 100 visitors and workers have gathered outdoors to witness the assemblage, a kind of industrial cake-topping heralded by the halt of hammers and ratchets.

"I know this is not the most exciting thing in the world, but this is a once-in-a-lifetime experience," Robinson says gleefully.

Plus, he notes, now the conservatory will be visible from Lakeside Avenue and Hilliard Road, a constant reminder to passers-by of the prodigious future of the gardens.

"Should we tell people the truth?" he jests to the huddled audience of contractors and associates. "This is just going to be one big cell-phone tower. Verizon made a big contribution." Laughter ensues.

The crane has done its duty. Construction workers atop the base steel structure secure the dome in place. At last the audience, with Robinson, can cheer. All do.